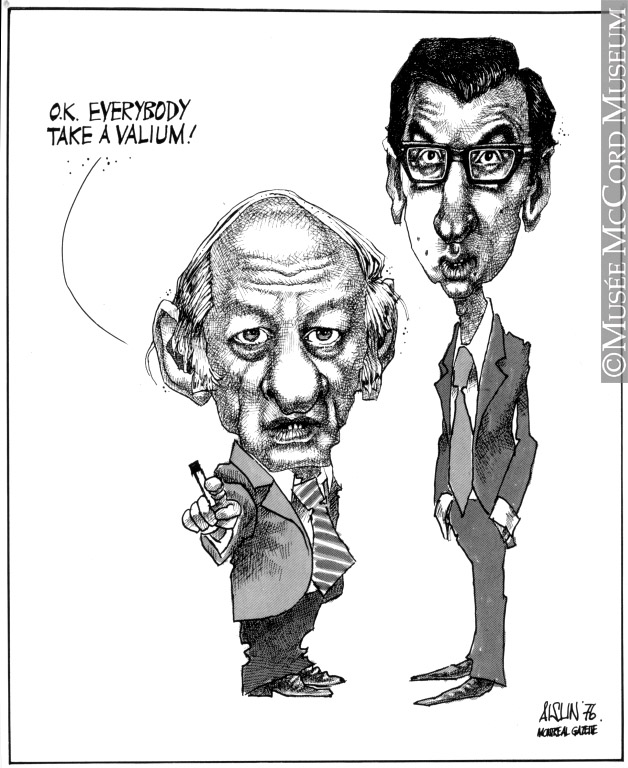 His eternal cigarette in hand, newly elected premier René Lévesque offered those words of comfort to Gazette readers in Aislin’s editorial-page cartoon the morning after the Parti Québécois victory of Nov. 15, 1976.
Who cares that Lévesque never actually uttered the phrase? It has become part of the language, a marker of English-speaking Quebecers’ identity, a reminder that whatever happens, from a PQ landslide to collapsing highway overpasses, we can laugh about it.

The iconic cartoon by Aislin – pen name of Terry Mosher, The Gazette’s political cartoonist for 40 years – is “one of the outstanding images of the late 20th century in Canadian politics,” says Dominic Hardy, a professor of art history at the Université du Québec à Montréal.

“Yes, it’s an illustration of after the PQ election in ’76, but it also continues to speak to us today,” Hardy says.

“René Lévesque ... is telling everybody, ‘All right, now, let’s relax and see what’s going to happen.’ That for me is an example of a truly iconic image, one that continues to glow and have meaning.”

Proof, according to Hardy, that it’s time to update our definition of fine art and give pride of place to political cartooning.

Long snubbed by the art world, editorial cartoonists deserve recognition as artists who cut through political bafflegab and corporate spin to help us make sense of an ever-changing world, says Hardy.

“They’re people we feel are always on the lookout for us, to try to make sense of the complexities of the governments we live under,” he says.

Quebec’s political cartoonists are the focus of an exhibition titled Cartooning Calamities at the McCord Museum, where the Association of Canadian Editorial Cartoonists is meeting this weekend. They are also prominent in the new softcover book Caricature – Cartoon Canada (Linda Leith Publishing, $19.95), edited by Mosher and featuring favourite works chosen by Canada’s leading editorial cartoonists.

In an era when newspapers are cutting staff and transferring resources to the Internet, political cartooning in Quebec continues to thrive, Hardy says. That runs counter to the trend in the U.S., where many newspapers have replaced staff cartoonists with syndicated content.

And in Canada, where a video by Vancouver Province cartoonist Dan Murphy has gone viral after the newspaper pulled it from its website, political cartooning also continues to arouse controversy. (The video is a spoof of a commercial promoting Enbridge’s Northern Gateway pipeline project. The newspaper said it took down the video for copyright reasons, but Murphy says Enbridge threatened to pull its advertising if the video was not removed. The Association of Canadian Editorial Cartoonists said it will issue a statement of support for Murphy on Saturday.)

In Montreal, satire is a vital part of the vibrant visual-arts scene, Hardy says. That ranges from the popularity of the bande dessinée to editorial cartoons, a prominent feature of the city’s four daily newspapers.

“We’re not telling the full story of the arts in Canada unless we include what the caricaturists have done,” he says. “If you look at those cartoons, you realize there are some wonderful subtleties about how it’s placed on the page, how the space is used, the quality of the drawing and the relationship of line. These are master practitioners of the designed image at work. And I think it’s been overlooked in the history of the fine arts in Canada.”
Quebec’s editorial cartoonists are media personalities in their own right, sought out for insights on current affairs, says Christian Vachon, curator of paintings, prints and drawings at the McCord Museum and of the Cartooning Calamities exhibition, featuring the work of 16 cartoonists from the past 150 years.

La Presse editorial cartoonist Serge Chapleau’s animated political satire Et Dieu créa ... Laflaque is a staple of French-language TV. Montreal is also home to visual satirists like Dave Rosen, author of The Stephen Harper Colouring and Activity Book (Pop Boom Bang Books, 2011), and Oleg Dergachov, whose political cartoons are better known in Europe and his native Russia than here. The presence of Drawn & Quarterly, a leader in publishing graphic novels and comic books, also contributes to the dynamism of humorous illustration in the city.

“Canada is a good place to be a political cartoonist,” Vachon says. “That’s because they’re respected – they’re almost venerated.”

That is particularly true here, he says. “I think Quebec is one of the rare provinces where on the radio in the morning there is a review of the day’s political caricatures.”

Political cartooning arrived in Canada in 1759 with British officer George Town­shend, who sketched satirical drawings of his commander, Gen. James Wolfe, at the Battle of the Plains of Abraham. Wolfe threatened to punish Townshend for his drawings but was killed in the battle, leaving Town­shend to accept the French surrender.

The Montreal Star was one of the first newspapers in North America to feature editorial cartoons. Henri Julien, who joined the Star in 1888, sketched debates in the House of Commons by day and put his drawings on the train each night in time for the next day’s edition.

“Canada hit the world stage in terms of producing these three brilliant individuals,” says Mosher, 69, recipient of two National Newspaper Awards and an Officer of the Order of Canada. “I think that’s the reason we exist here today, because of them.” 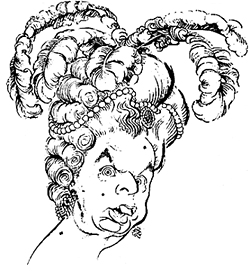 LaPalme attacked Quebec premier Maurice Duplessis in an era when few journalists dared to do so, portraying the Union Nationale leader as a pimp selling off the province to American interests. 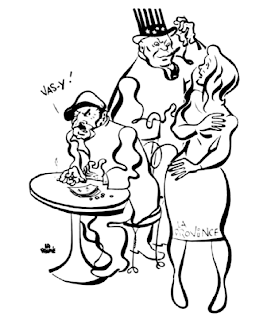 “There’s kind of a golden age at the end of LaPalme’s career,” Hardy says, pointing to a succession of great political cartoonists at major dailies across the country over the past half-century. “There’s one generation right after another where people are very strong.”

Francophone Quebecers’ minority status in Canada is one reason political cartooning has particular resonance in this province, Vachon suggests. “To have caricaturists like Normand Hudon and Robert LaPalme, who expressed themselves in our language, who said what we were thinking, did us good. It was a kind of social therapy,” he says.

The past 50 years have been an era of unprecedented influence for editorial cartoonists in Quebec. “With just a few strokes of the pen, they could demolish a career,” Vachon says.

“When Chapleau arrived at La Presse, Lysiane Gagnon, who was editorial page editor, told him, ‘You know, we’re Liberal. We have a lot of respect for Stéphane Dion, so I would ask you not to depict him as a rat as you did at Le Devoir.’

“You can’t tell a caricaturist what to do,” he adds. “The next day, Chapleau depicted Stéphane Dion as a rat with a moustache. Lysiane Gagnon wasn’t happy. But Chapleau could do as he liked.”

Former Bloc Québécois leader Gilles Duceppe never lived down his 1997 campaign visit to a cheese factory after Chapleau’s excruciating portrayal of him in a shower cap, promising to visit a condom factory the next day. 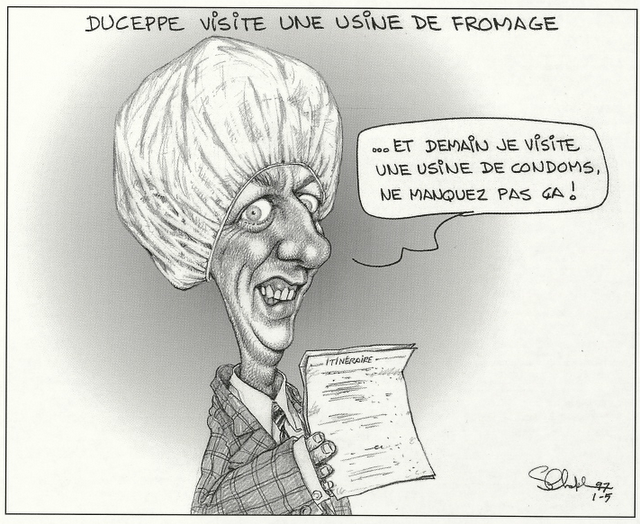 “I’ve mellowed like everyone else and become far more accepting and found myself thinking more like a Quebecer now than a Canadian,” he reflects. “I think of myself as a Montrealer first, before everything else. Chapleau and I are a very good example of that, because we’re pals and we realize that’s the meeting point for the two of us. We both think of ourselves as Montrealers before anything else.”

“I draw now for how a cartoon looks online, as opposed to how it looks in the newspaper,” he says. “The technique that I started out with, cross-hatch, is not that important anymore because the technology has changed.”

Colour has also transformed the once black-and-white world of editorial cartooning, Mosher adds. “That’s helped a great deal in terms of vibrancy in the cartooning.”

“Political cartooning is faring very well with technological change,” Vachon says. “In our fast-moving world, where everything happens in an instant, you don’t always have the time to read a long article. A political cartoon or a photo is instant. In an era when social media like Twitter and Facebook have become very important, people send a lot more images and cartoons than newspaper articles.”

Most editorial cartoonists at Quebec newspapers have contracts under which they retain ownership of their drawings, Vachon notes – a practice that has benefited the McCord, whose permanent collection includes more than 25,000 political cartoons dating back to 1759. Mosher has donated his cartoons to the McCord since 1983 and Chapleau, Garnotte (Michel Garneau) of Le Devoir and The Gazette’s Pascal now do so as well.

“In my opinion,” Vachon adds, “with the supposed death of the paper version of newspapers, it’s the news photo and the political cartoon that are faring best.”

Cartooning Calamities, a look at political disasters and doomsday scenarios through the eyes of 16 Quebec political cartoonists over the past 150 years, runs until Jan. 26 at the McCord Museum, 690 Sherbrooke St. W.
For more information, call 514-398-7100 or visit www.mccord-museum.qc.ca.

The museum is also hosting an exhibition of Canadian political cartoons chosen by the cartoonists themselves as their best work. It opens this weekend during the convention of the Association of Canadian Editorial Cartoonists. 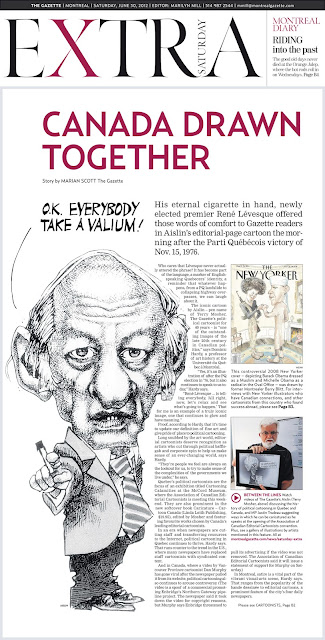 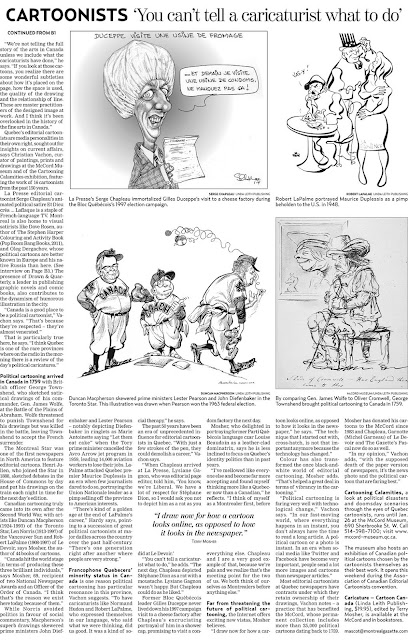