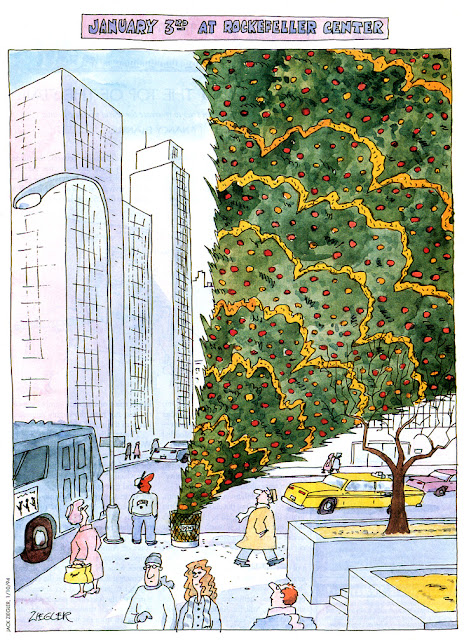 Jack Ziegler's innovative blend of cartoon and comic-book conventions, often by replacing exterior captions with inset language, has inspired many a younger artist to stray even further from the time-tested grammar of the New Yorker cartoon. 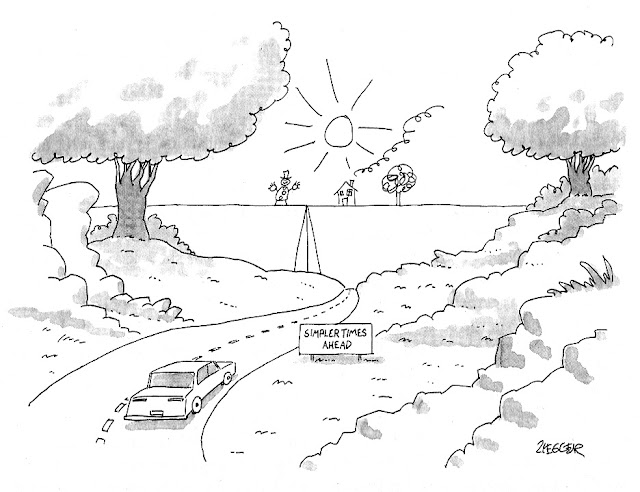 Here are a few excerpts from an interview conducted by Richard Gehr in Comics Journal:

Jack Ziegler: While I was doing this writing, or trying to be a writer, Brian (McConnachie) was in New York and he was also trying to be a writer. He was also doing cartoons on the side, but he can’t really draw. He’s a terrible artist but he has funny ideas, so he started selling stuff to National Lampoon. And he said, “I can’t even draw and I’m selling cartoons. You can actually draw. Maybe this is something you might wanna think about.” So I did. I started kind of fiddling around with it, and then I found that I really enjoy doing it. I mean, I wasn’t particularly good at it, but I found I could do it. So I started doin’ that and then thought maybe this would be a way to make a living without having to sell my soul in some awful job.


I was doing a lot of cartoons in San Francisco. I think I sent some stuff out and it all got rejected. Then I thought maybe I should go to New York and actually visit some of the magazines and do an in-person thing. So I went to New York for like a week, and stayed with Brian and his wife. That’s when I decided we should move back there. If I’m ever gonna make this work, it’s not gonna happen in San Francisco. We packed up the bus again, got a U-Haul, and attached the bus to the back.

Where did you live in New York?

We actually moved into Brian’s mother’s summerhouse. We stayed there until just before spring, and I was making trips into New York. This would be the end of 1972, beginning of ’73. I was doing cartoons out there and coming into the city, making the rounds with the magazines, dropping off every week at The New Yorker, getting my stuff back the next week and dropping off the next batch, going to the Lampoon – at that point, Brian might’ve been an editor there. We stayed out there until we had to move in the spring. We looked for places on Long Island and Westchester, and we wound up in New Haven, Connecticut. It was while we were in New Haven that I started to sell to The New Yorker. The first thing they bought from me was an idea for Charles Addams to draw. 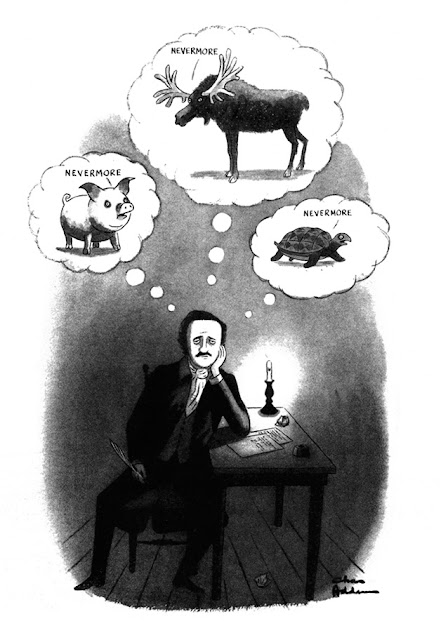 It’s Edgar Allan Poe sitting at a table, trying to think of something to write; and he’s thinking of all these animals saying “Nevermore.” One’s a turtle, I think, and one was – I can’t even remember, maybe a dog or a cat or something – before he hit the obvious. [Laughter.] So that was kind of exciting. But I would’ve much preferred to be able to do it myself.

Do you remember how much you got paid for it?

Maybe only a hundred dollars, maybe a hundred and fifty, I don’t know. But at that point they were buying ideas for Addams and a couple of other people, too. So yeah, that was my first sale there. And you’d always get a rejection slip from The New Yorker. On my rejection slip that week, they said they’d like to buy this as an idea for Addams.

Was that when Lee Lorenz was transitioning into the job?

Lee had started maybe a year before that, and he was really on the lookout for new people. About six months after I sold the Addams idea, they bought one of mine. Instead of a rejection slip, I got an actual piece of paper with The New Yorker letterhead on it, saying, “Would you mind coming back and seeing me?” – signed, Lee Lorenz. Of course if you’ve ever seen Lee’s handwriting, it’s indecipherable. But I went back there and met him, and I was just a nervous wreck ’cause I didn’t know what the hell was goin’ on. I was hopin’ they were gonna buy something. And they did, they bought that one idea, so I had to go home and do a finish on it, and then send it back. Then I think they rejected that one, too. It was the “beasts of the field” drawing. The machinery wasn’t quite right in the conveyor belt.