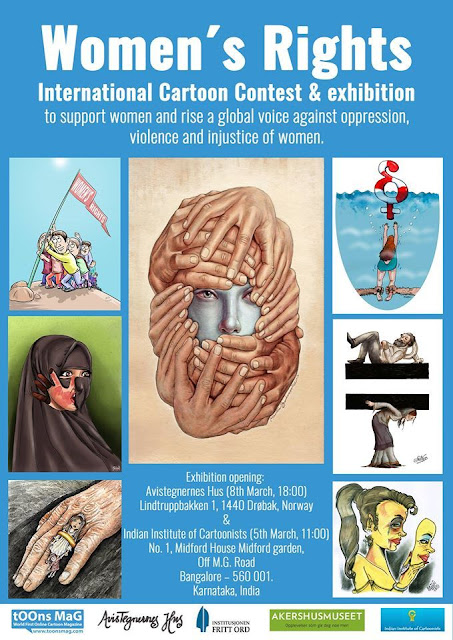 A selection is represented in the Women’s Rights exhibitions, which opens in Drøbak, Bangalore and Uttar Pradesh for the International Women’s Day 8 March 2016.

The drawings in the exhibitions deal with women’s rights and limitations; the lack of education, forced marriage, female genital mutilation, violence, discrimination, legal protection and workload.

For Rahman, the background for organising the contest and exhibitions is largely personal: When Rahman’s mother was eleven years old, she was married off. She was only a child and knew nothing about marriage. Twelve years of age, she became pregnant, but could not give birth and the child died. Arifur was her first born, at the age of 13. Some years later, after giving birth to his sister, their father divorced her. Life became increasingly difficult.

“Divorce in Bangladesh is a shame for a woman. A good man would not marry a divorced woman, let alone take care of her children. My mother decided to move back to my grandmother and dedicated her life to us children. I wore the same shirt every day for two years, carefully washed and mended by my mother.

She was an uneducated woman, but I am proud of her. She had a great personality. Sometimes she said to me 'If I were educated, I could find a job and support you two.” I lost her in April 2012, she was only 40.

By arranging this cartoon contest and exhibition openings on the International Women's Day 2016, I pay my respect to my mother and support all women's rights.” Rahman says.

Plagiarism In the Women's Rights International Cartoon Contest on this blog.