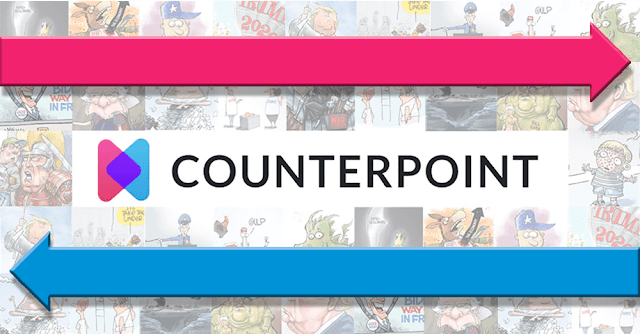 Counterpoint has arrived with a punch.

The eagerness of participating cartoonists to promote this new platform explains, in part, why it has gone from some 750 subscribers three months ago to around 50,000 today.

But another explanation is that people want good editorial cartoons.

Granted, the fact that it’s free doesn’t exactly discourage subscribers to this newsletter.

But the line-up is impressive. While not every cartoonist appears in each issue, here’s a list of who we’ve seen so far:

The newsletter is simple enough: You subscribe, it comes. It started as a weekly, now it’s twice a week. Success will do that.

There’s no charge, and the eventual business plan is to have it be entirely advertiser supporter, so there won’t be a charge.

The format is also simple: A half dozen or so cartoons with widely varying perspectives, as that above list would suggest. One may challenge you, the next make you laugh, the one after that infuriate you, ideally two of each.

They’re current, which isn’t always the case with cartoon round-ups, because they’re not pulled from the past week’s syndicate sites: They’re first-run cartoons.

And, yes, it’s worth what you’re paying for it. “Free” is an excellent price point.

So, how did this thing happen? 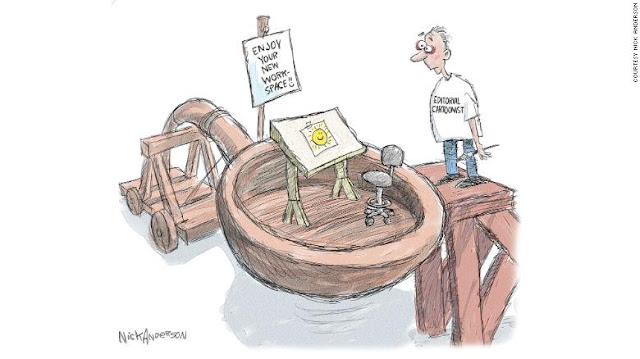 In mid-2018, Nick Anderson, himself a victim of downsizing at the Houston Chronicle, became upset with the way Rob Rogers was being shoved out of his long-time perch in Pittsburgh.

“I approached the (Association of American Editorial Cartoonist) board and said ‘This is not new,'” Anderson says, citing not only the ongoing layoffs in this country, but the more deadly attacks on political cartooning in Paris and Denmark.

He wrote a statement for the AAEC, but then-president Pat Bagley said it felt like a column with wider appeal.

Cartoon-fan Jake Tapper was approached and the piece ended up on CNN’s website, where, Anderson says, “It didn’t really matter if only one person read it.”

Easy to say in retrospect: That one person was Vivek Garipalli, venture capitalist, entrepreneur and founder of a healthcare company in Silicon Valley, who agreed with Anderson’s contention that cutting off dialogue is unhealthy.

“A week later, I was flown out to New York,” Anderson says, for a confab with Garipalli in the Hamptons.

“It was quite surreal,” he admits. “Here I was, struggling financially, barely able to keep my head above water, sitting on the beach looking out at the water, then being flown back to Manhattan in a helicopter.”

He quickly summoned Kal Kallaugher and Matt Davies for a more in-depth brainstorming session with Garipalli, and the rest …

… well, the rest was a lot of fits and starts and drawing up of a business model and some testing, he says. Things like this don’t just leap up fully formed.

But they got the newsletter together in time to catch the release of the Mueller Report this spring. At which point that leap from 750 to 50,000 began.

To subscribe, go here and enter your email address. The newsletter will arrive in your box twice a week.

As the traditional platforms for political cartooning disappear, the choice is to invent new ways or to let the art form die.

This seems to be working.

In the current market, that’s worth a parade.
Published by Bado at 12:00 AM