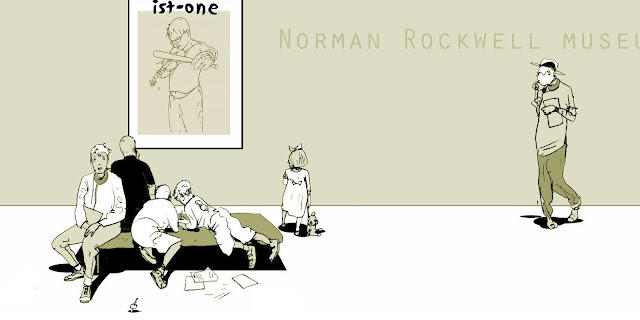 Steven Heller wrote the following essay for the exhibit:

Istvan Banyai is mad. Not angry or despondent, but mad in the transcendent sense -- in a perpetual state of creative lunacy that only a gifted artist can achieve. Madness is also a state of grace that enables this artist’s eye to see what the average person cannot, and enables him to say what the non-artist is incapable of articulating.

Ist-one, as he calls himself, is possessed by what he calls “an organic combination of turn-of-the-century Viennese Retro, interjected with American pop, some European absurdity added for flavor, served on a cartoon-style color palette.” He inspires other artists through the translation of these disparate influences into a personal visual language manifest through exquisite illustrations that are vessels for complex narratives aimed at adults and children. His signature sinuous linearity is at once beguiling and hypnotic, lulling his viewers into a moment of wonderment, while inviting them to take part in his madness(es).

Rather than draw from the observed world, Banyai has written, “I draw, and map my mind as I go along.” His imagination frames an internal world, refusing to inject what he calls “social realism” to his work. Perhaps this is a remnant of his early life in Hungary (born in Budapest in 1949) following the failed “uprising” in 1956, when after tightly shutting the iron curtain, the Soviet occupiers sucked the life out of the nation’s creative arts, replacing it with dreary Communist visual propaganda. For Banyai, art became an opportunity to rebel against convention and revel in countless alternatives.

Rather than follow other artists leads (or censors’ decrees), Banyai asserts “I can only see, what makes sense to me. If I am lucky to have that, immediately a picture comes to mind. Now I just have to draw it.” If his mind and body are in synch, as they usually are, he will conjur an image that, he says, gets as close to that imaginary thing as possible. “It is all imitation, a semiotic game… [that] Also works as therapy and – keeps me out of jail!”

I recall when Banyai made a trial visit to New York with his hefty portfolio in hand; he was testing the waters. It was vividly clear that he had an overpowering desire to live and work here like many other very talented artists washed ashore during a period of Eastern European emigration, when travel restrictions between Soviet countries were relaxed. What began with a few visually eloquent illustrators from Rumania, Czechoslovakia and Poland, grew to include almost every Soviet Bloc country, including Hungary. The New York Times was like Ellis Island for these artists. Through its revolving doors on West 43rd Street, literally one or two dazed Eastern European illustrators arrived each day and would present their wares. Because so many were well trained in the art of symbolic subterfuge, they were perfect for the intellectual needs of the Times Op Ed page, Week in Review and other sections that used “conceptual illustration” and “graphic commentary” – illustrations of ideas that, as Banyai says, where part of a semiotic game.

Banyai’s work, however, stood apart from many of the earlier émigré arrivals. His mastery of line, ease of distortion, confidence with composition were expected, but his capacity to express himself in a visual language that was at once mysterious and accessible was a key asset. Additionally, but not inconsequentially, his work defied what some editors at the Times lamented was “lugubrious,” dark, morose at times off-putting. Banyai may evoke the same kinds of cautioniary messages as the lugubrious ones – protesting war, political intrigue, economic decline, etc. – but did so in a cooler, minimalist, indeed more friendly manner. Or has Seymour Chwast, co-founder of the legendary Push Pin Studios told me, “Istvan's work has a unique quality...a combination of solid drawing, engaging concepts and a joyous spontaneity.”

What’s more, his was not reliant on the frequent surreal cliches that became indicative of the OpEd style. He did not need such visual crutches because, as Chwast says “Istvan knows how to create an illusion of space, painlessly and at any angle imaginable.” Meaning the man could draw rings around others.


Banyai was soon in great demand, employed by the dozens of editorial outlets (that have since dwindled to a mere few), notably The New Yorker and New York Magazine, The Atlantic and ultimately regular features in The New York Times. He also found work in advertising but the most game-changing moment in his professional life, was the first of his Zoom (1995) and later ReZoom (1998) children’s books and the subsequent short films made for Nickelodeon and MTV.

Because Zoom allowed him to tell a fully constructed story, it went beyond the limitations of his one-off editorial genre. Moreover, it revealed the mischieveous side that has come to define Banyai’s work. Taking a page out of the Charles and Ray Eames classic film The Power of Ten, Zoom gave his child audience and their parents a new way to see how their small universes inter-connected with the larger universe. The drawings were more “social realism” than others before and after, but done is such a way as to engage the younger eye without excessive mystery. Once they bought into the Zoom conceit, they were hooked on what will come next. Sprinkled through the first and second volumes and also the optically delusional REM, Rapid Eye Movement (1998), which celebrates mysteries of sleep, are visual puns and graphic quirks that are distinctly Banyai. “I don't know if the Zoom books and The Other Side are his best works,” adds Chwast. “But I wish I had done them and if I had I would have been exceedingly happy and proud.”

Over the years, Banyai’s work has become a staple of American illustration, yet not because he relies entirely on conceits that work. His line, which was always assertive, has become even more fluid and expressive – a pleasure to behold and imagine how he does it so effortlessly. Banyai has added to his skills but retains the subversive wit – and madness – that continues to define him.

For more Steven Heller, check out Citizen Designer: Perspectives on Design Responsibility, one of the many Heller titles available at MyDesignShop.com. 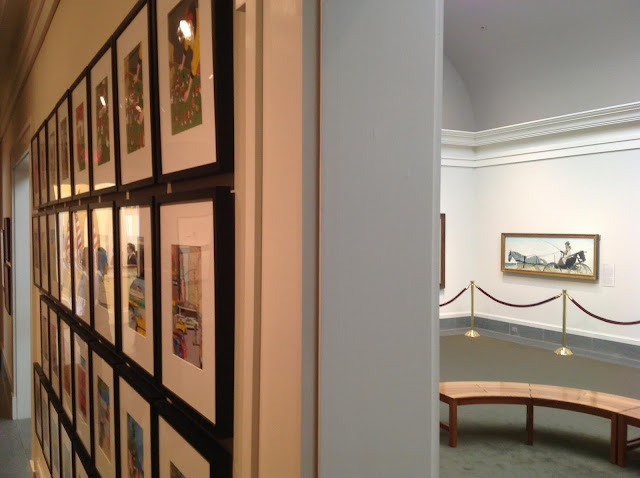