The Art of Controversy by Victor S. Navasky 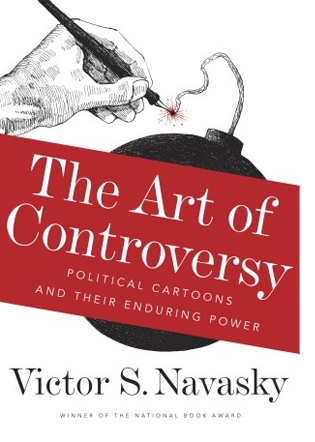 On sale April 9, "The Art of Controversy: Political Cartoons and Their Enduing Power", a lavishly illustrated, witty, and original look at the awesome power of the political cartoon to enrage, provoke, and amuse throughout history.


As a former editor of The New York Times Magazine and the longtime editor of The Nation, Victor S. Navasky knows just how transformative—and incendiary—cartoons can be. Here Navasky guides readers through some of the greatest cartoons ever created, including those by George Grosz, David Levine, Herblock, Honoré Daumier, and Ralph Steadman. He recounts how cartoonists and caricaturists have been censored, threatened, incarcerated, and even murdered for their art, and asks what makes this art form, too often dismissed as trivial, so uniquely poised to affect our minds and our hearts.

Drawing on his own encounters with would-be censors, interviews with cartoonists, and historical archives from cartoon museums across the globe, Navasky examines the political cartoon as both art and polemic over the centuries. We see afresh images most celebrated for their artistic merit (Picasso's Guernica, Goya's "Duendecitos"), images that provoked outrage (the 2008 Barry Blitt New Yorker cover, which depicted the Obamas as a Muslim and a Black Power militant fist-bumping in the Oval Office), and those that have dictated public discourse (Herblock’s defining portraits of McCarthyism, the Nazi periodical Der Stürmer’s anti-Semitic caricatures).


Navasky ties together these and other superlative genre examples to reveal how political cartoons have been not only capturing the zeitgeist throughout history but shaping it as well—and how the most powerful cartoons retain the ability to shock, gall, and inspire long after their creation.

A thoughtful review of Victor Navasky's upcoming book on political cartoons from Tjeerd Royaards at the Cartoon Movement.


Victor S. Navasky is a former editor of The New York Times and The Nation, and in his long career he has dealt with many cartoonists. Better yet, he is a fan of cartoons and caricatures, and understands (and appreciates) their power. The Art of Controversy is, as the author calls it, an 'unguided tour' of a number of great cartoonists (starting in the 18th century) and the controversy surrounding their work.

Before taking us on his tour, Navasky uses four chapters to talk us through three theories about why cartoons, and caricatures in particular, are so powerful: the Content Theory, the Image Theory, and the Neuroscience Theory. The Content theory focuses on what the cartoon is about, and the Image Theory on how the subject is portrayed, but the most interesting one is perhaps the Neuroscience Theory. Neuroscience has revealed (through experiments with birds) that, because of their simplification, the area of the brain involved in facial recognition reacts more quickly to caricatures than to photos of real faces. Although the implications of this theory for understanding how cartoons work are contested, it could expain why carticatures can be so powerful and upsetting to the ones portrayed. Caricatures are registered more clearly by the mind's eye, and therefore remembered longer and more strongly than photographs.

The book is not an academic attempt to methodically catalogue cartoon controversy through the centuries. Rather, Navasky describes himself as an aficionado who has 'long believed in satire as a particularly effective instrument of social criticism.' He also describes himself as a free-speech absolutist. The public sphere is, or should be, governed by what German philosopher Jürgen Habermas calls the power of the better argument. Satire, and thus cartoons and caricatures, are in as sense good or bad arguments competing with other arguments within the public sphere.

It is here that I divert somewhat from the review, and might even stir up some controversy myself, to pose what I (a free-speech absolutist myself) found to be a conundrum. Navasky shows that powerful cartoons can work as 'totems' that, once unleashed, can have an uncontrollable power, independent of the creator of the image. The book shows these images, the good ones (e.g. cartoons condemning corruption and power abuse), but also the very, very despicable ones. In the latter category, we find no better example than the work of German cartoonist Philipp Rupprecht (pen name Fips), a weekly contributor the Nazi weekly newspaper Der Stürmer.

Der Stürmer was an important propaganda tool for the Nazis, and the images by Fips are viciously anti-Semitic, employing every gruesome stereotype available. At the beginning of the chapter on the work of Fips, Navasky recounts that Julius Streicher, the editor of Der Stürmer, was hanged after the Nuremberg trials, but Fips only served six years for his contributions to the magazine. He goes on to suggest that justice might have been better served with a death sentence for the cartoonist as well.

Although, in light of Fips' work, I can certainly understand the sentiment, it struck me as an odd one in a book that in all the other chapters whole-heartedly defends the rights of cartoonists to draw as they please. There were, are, and probably always will be despicable opinions out there, spreading hate, discrimination, aggression and intolerance. But either we agree that opinions (whether they be written, spoken or drawn) are so powerful that we need to punish those we, as a society, consider sufficiently dangerous, or we cling on to our hope that in the end, the better argument will prevail.

Apart from this incongruity, the book is a pleasant read, with a tone reminiscent of an old man with a wealth of anecdotes to share. It is especially interesting to read about his own experiences (and opinions) as editor dealing with cartoons that gave rise to protest among the readers and staff of The Nation. The book is a testimony that shows the influence and impact of cartoons in world history in the last two-and-a-half centuries. The cartoonists featured, over 30 in total, are excellent. Some notable examples are British artist David Low (who landed himself on the Gestapo death list because he enraged Hitler with his cartoons), Palestinian cartoonist Naji al-Ali (whose figure Handala lives on long after the artist was assasinated in London in 1987) and John Heartfield (probably the world's first Photohopper). If you are not familiar with one or more of these names, then this book is certainly recommended reading. Because the book is basically a collection of cartoons, the publisher would do well to make it available as an art edition, with all the cartoons printed large and (when applicable) in full color. The works published in The Art of Controversy certainly deserve it.

A review in Maclean's by BrianBethune.


In 1984, Navasky, then publisher of the leftist magazine The Nation, decided to publish a cartoon by David Levine, depicting Henry Kissinger in bed, under an American flag and on top of a naked woman who had a globe for a head. The message was obvious enough and, in Navasky’s mind, surely congenial to Nation writers and editors: the United States, as personified by its former secretary of state, was engaged in “screwing” the world. Two hours after Navasky okayed the drawing, he was presented with a petition signed by 25 staff members—out of a work force the puzzled publisher thought totalled only 23—denouncing the image’s sexism. That experience, reinforced by the deadly riots over the Danish Mohammad cartoons of 2005, set Navasky to searching for the reasons behind the galvanizing emotional impact of political images. 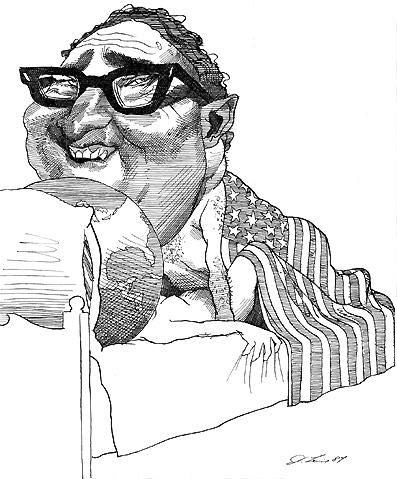 He investigates the three leading theories. Content is the obvious choice, except the same message expressed in words doesn’t seem to have a fraction of the impact. Content, in fact, looms largest when it’s misinterpreted: New Yorker cover illustrator Barry Blitt was mocking Obama caricatures, not Barack and Michelle Obama themselves, in 2008 when he portrayed the presidential candidate and his wife dressed in terrorist garb and doing a fist bump, but it was Obama supporters who poured vitriol on the magazine. Second, the image theory: simply to draw something is to make it come alive in a way it wasn’t before (the cartoonist as creator of what he is mocking). Finally, neuroaesthetics: some scientists believe our facial recognition hardwiring responds more powerfully to caricatures than to the real thing, because the former exaggerates the very features we use to distinguish one face from another. In other words, if you harbour strong feelings about Richard Nixon, you will respond more quickly and forcefully to a caricature of the former president than to a photo.

There’s something to be said for each theory, Navasky suggests, but explanations are clearly of less interest to him than the rich survey he offers: exquisite samples from two centuries of political caricatures, from Hogarth to Levine.

Cartoonist Liza Donnelly comments on the lack of feminine representation in Forbes.
Published by Bado at 4:00 AM