Jack Knox in The Times Colonist. 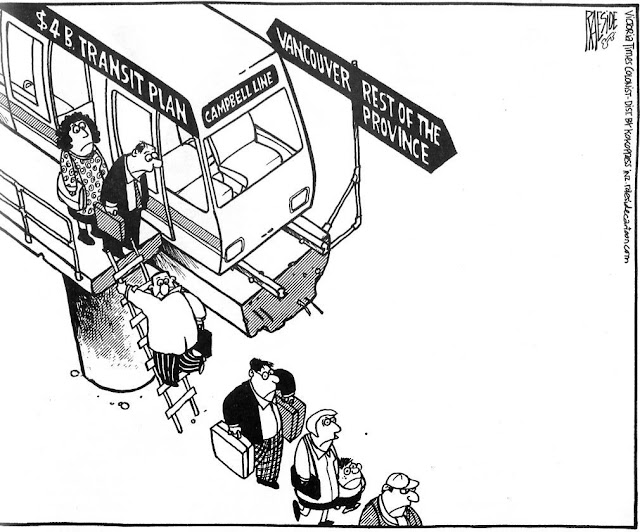 After 36 years of drawing editorial cartoons for the Victoria Times Colonist, Adrian Raeside's position was eliminated on Friday, a victim of budget cuts.

His strip, The Other Coast, will still run in the comics, but the insightful, satirical, witty pieces of social commentary for which he is famous will no longer grace the opinion pages.

It has been a long run. Raeside was, in fact, the last person whose newsroom roots could be traced to the old Daily Colonist, pre-merger.

Cartooning has changed since then. “People are a little more easily offended than they used to be,” he says. “Satire can be taken the wrong way these days.… You second-guess yourself more than you used to.”

But lord, it’s still a great way to convey a message. And nobody is as brilliant as Raeside at seeing and ridiculing hypocrisy, in sticking pins in the self-inflated, at highlighting the chasm between how things are presented and how they really are.

At 58, his voice still has a trace of New Zealand, where he was born to James, a prominent forensic scientist who later turned to publishing, and Joan, a prolific author, playwright and composer. In 1972 the family moved to Salt Spring Island, where Joan’s father, Sir Charles Wright — the lone Canadian on the Scott expedition to the Antarctic — had already settled, as had Adrian’s aunt, Patricia Wright, a well-known artist.

Raeside says he turned to cartooning because he had proven rotten at everything else: land surveying, working in the bush, toiling in a Thunder Bay grain elevator. “Rock bottom was when I was turned down for a job as a vacuum cleaner salesman.”

He’s being self-deprecating. In a nation famous for its political cartoonists, Raeside stands out. His work has been sold in more than 40 countries, with even Pravda and Izvestia picking him up in Soviet days. The author of 16 books, he is one of those people recognizable by last name alone. “Did you see Raeside today?”

It wasn’t easy to get there, though. He had hundreds of rejection letters, was selling collections of his cartoons out of the trunk of his car for two bucks a pop, when the Toronto Star picked up a strip called Captain Starship in the late 1970s. The Victoria papers weren’t interested in his political stuff.

Then one day on Salt Spring, Raeside ran into reporter Norman Gidney, who advised him to pester the Colonist’s new editorial page editor, Don Vipond. Raeside did so the next day. Vipond liked what he saw, picked up a couple of panels, then started using Raeside more and more frequently. “I think I was getting $8 a cartoon, which cost me $12 in gas and ferry fare.” He was 22 years old.

Politics have always been his bread and butter, with B.C. offering up an endless cast of characters.

“The Vander Zalm years were great for cartooning. No matter what I did one day, he would go out the next day, open his mouth, and top it.”

Raeside has always taken pains not to be mean, though; the sanctimonious, vicious personal attacks that litter the Internet appall him.

In real life, as in his work, he watches out for the underdog. For all his acerbic wit, he is legendary for being genuinely kind to those whom others treat as though they are invisible. But show a hint of pomposity, he will gut you like a lion taking out a wildebeest.

Cartoonists share a cheerfully dark sense of humour. Once, when the TC published a story about Raeside, someone decided it would be a super idea to ask his friend and fellow satirist Dan Murphy to illustrate the piece; Murphy sent a drawing of Raeside having relations with a sheep. (Don’t know if that was a Salt Spring reference or a New Zealand one.) Raeside once penned an obituary that asked for single malt scotch and Cuban cigars in lieu of flowers.

The humour can mask a solitary, workaholic existence, though. Being funny is serious business, the pressure to produce never-ending. “You do spend an inordinate amount of time working on your cartoons.” The brain never shuts off. As soon as one deadline passes, another looms. Raeside is up at 5:30 or 6 a.m., thinking of the next one. Just ask his wife, Mari, who has shared his life for 25 years.

Raeside says he’ll keep drawing, still has something to say. You’ll be able to find his work on an updated raesidecartoon.com website that he hopes will go live next week. As for those of us who have been fortunate enough to work with him, all we can say is thanks.

Raeside’s last cartoon in The Times-Colonist: