"Harvey Kurtzman: The Man Who Created MAD and Revolutionized Humor in America" 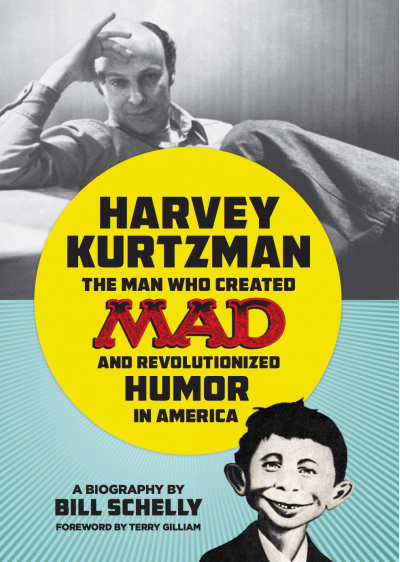 Harvey Kurtzman created MAD, and MAD revolutionized humor in America. Kurtzman's groundwork as the original editor, artist, and sole writer of MAD provided the foundation for one of the greatest publishing successes of the 20th century. But how did Kurtzman invent MAD, and why did he leave it shortly after it burst nova-like onto the American scene?

Bill Schelly's heavily researched biography finally and fully answers these question for the first time. Through fresh interviews with Kurtzman's colleagues, friends and family, including Hugh Hefner, Al Feldstein, James Warren, R. Crumb, Jack Davis, Gilbert Shelton, and many others, and an examination of Kurtzman's personal archives, this book tells the true story of one of the 20th century's greatest humorists.

His family life, an FBI investigation during the McCarthy Era, his legal battles with William M. Gaines (publisher of MAD), all are revealed for the first time. Rich with anecdotes, from Kurtzman's Brooklyn beginnings to his post-MAD years, when his ceaseless creativity produced more innovations: new magazines, a graphic novel, and "Little Annie Fanny" in Playboy.