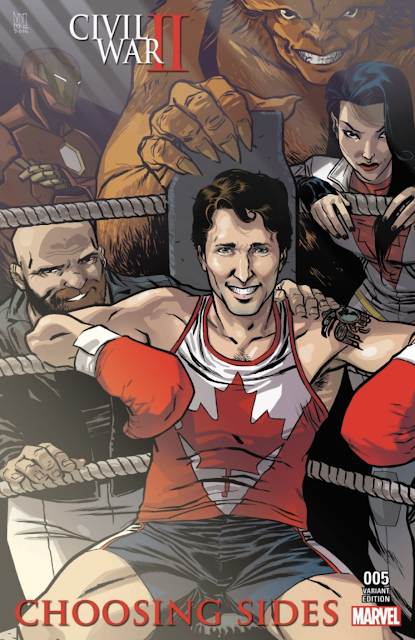 Make way, Liberal cabinet: Prime Minister Justin Trudeau will have another all-Canadian crew in his corner as he suits up for his latest feature role — comic book character.

Trudeau will grace the variant cover of issue No. 5 of Marvel's "Civil War II: Choosing Sides," due out Aug. 31.


Trudeau is depicted smiling, sitting relaxed in the boxing ring sporting a Maple Leaf-emblazoned tank, black shorts and red boxing gloves. Standing behind him are Puck, Sasquatch and Aurora, who are members of Canadian superhero squad Alpha Flight. In the left corner, Iron Man is seen with his arms crossed.

"I didn't want to do a stuffy cover — just like a suit and tie — put his likeness on the cover and call it a day," said award-winning Toronto-based cartoonist Ramon Perez.

"I wanted to kind of evoke a little bit of what's different about him than other people in power right now. You don't see Obama strutting around in boxing gear, doing push-ups in commercials or whatnot. Just throwing him in his gear and making him almost like an everyday person was kind of fun."

The variant cover featuring Trudeau will be an alternative to the main cover in circulation showcasing Aurora, Puck, Sasquatch and Nick Fury.

Edmonton-born artist and writer Chip Zdarsky said he was approached by Marvel to write an Alpha Flight story and knew right away he wanted Trudeau included.

Zdarsky reached out to the Prime Minister's Office to inform them of his plans and was told that, while they couldn't endorse the comic, they were fine with him proceeding.

Despite being part of an international agency, the team feels they're "Canadian first" and seek out Trudeau for advice, he added.

"I didn't want this to just be like a walk-on ... rescued by superheroes and he thanks them and that's the end of the story," Zdarsky said. "I think a lot of these real-life appearances in comics tend to go that way. I liked the idea of him actually engaging them in an ethical debate.
Published by Bado at 6:01 AM