The network is thought to be spending millions of pounds on the project and it will be shown on Sky TV in the UK.

A source told The Sun: 'Preparation on the famous faces has already begun.'

Between 1984 and 1996 a regular audience of 15 million tuned in to watch the mockery of politicians, pop stars, sports personalities, religious figures and world leaders. The show won ten BAFTAs and two Emmys.

The show, created by Roger Law and Peter Fluck, made the careers of people like Harry Enfield, Steve Coogan and Jan Ravens, who provided the voices, and Ian Hislop, Richard Curtis and Ben Elton, who wrote scripts.

In its 12 years on our screens, Spitting Image mocked politicians from Westminster and around world, the Royals, sport stars, musicians and TV presenters.

Its most famous puppet was perhaps that of Margaret Thatcher, who wore a man’s suit in the show and treated her Cabinet with contempt.


One of the shows most famous moments was when, with the then-Tory cabinet around the dinner table, a waitress asked: ‘What about the vegetables?’ The model of Mrs Thatcher replies: 'Oh, they'll have the same as me.' 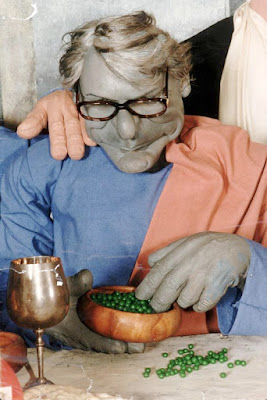 In a further mocking of the Tory leader's perceived lack of charisma, some of the most famous scenes to feature him showed him and his wife, Norma, eating peas. Major would occasionally say: 'Nice peas, dear.'

The Royal Family were not spared the Spitting Image treatment. The Queen was habitually portrayed with a headscarf and CND badge and the Queen Mother carried a copy of the Racing Post and spoke with a Birmingham accent.

One of the most famous sketches to feature the Royals appeared after Prince William was born, when the Queen broke a bottle of champagne over his head to 'Christen him'.


International leaders also featured in the show; Soviet leader Mikhail Gorbachev’s distinctive birthmark on his head was shaped into a hammer and sickle while US President Ronald Reagan was shown in bed with two red call buttons at his side, one marked 'Nurse', the other 'Nuke'.
Published by Bado at 12:00 AM