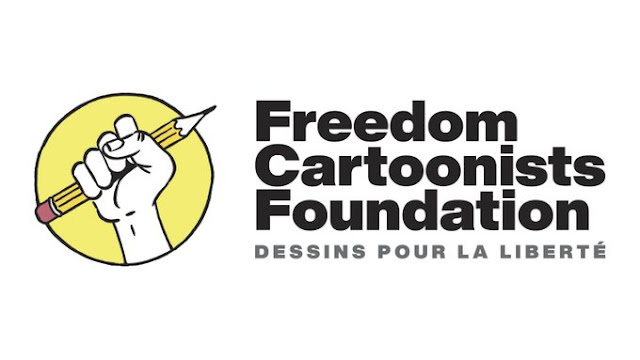 Ten years after its creation in Geneva, the Swiss Foundation "Cartooning for Peace", whose honorary chairman was Nobel peace laureate Kofi Annan, changes its name and reaffirms its action in favour of freedom of expression for cartoonists throughout the world.
Under the registered name "Freedom Cartoonists Foundation", it will pursue its main mission: to support those who create and publish editorial cartoons in difficult conditions, in particular under authoritarian or dictatorial regimes, through its International Prize awarded with the support of the City of Geneva. This initiative is accompanied by a public exhibition of cartoons by artists from all continents and all cultures on the shores of Lake Geneva.

Since 2012, every two years, the City of Geneva's International Press Cartoon Award, with its prestigious reputation, has put the spotlight on courageous cartoonists who fight with their weapons - pencils and humour - and remind us how fragile freedom still is, everywhere.

All the winners, including Musa Kart (Turkey) in 2018, Zunar (Malaysia) in 2016, Hani Abbas (Syria) in 2014 and four Iranian cartoonists in 2012, with their work are forcing each of us to face our own responsibility to preserve freedom of expression. The Freedom Cartoonists Foundation honours them for their courage, talent and for the energy they put into defending our humanity, by presenting them with the City of Geneva International Award.

The founders and members of the Foundation Board have decided by mutual agreement to strengthen their mandate and give new impetus to the cause that they have supported since 2010 with the French “Cartooning for Peace” Association - which continues its activities in Paris with Jean Plantu.