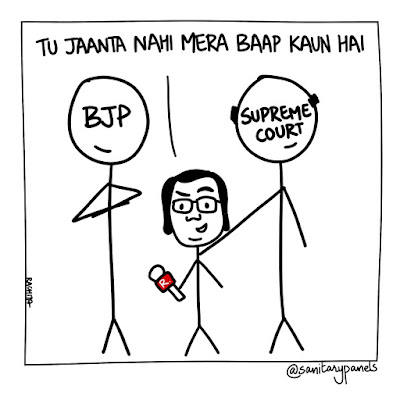 The central figure, Arnab Goswami, surrounded by a figure representing
the ruling party and the Supreme Court, saying "You don't know who my father is."
The Supreme Court on Friday issued notice to comic illustrator Rachita Taneja on the petitions seeking criminal contempt action against her over her caricatures published in 'Sanitary Panels' social media handles about the judiciary.
The notice is returnable within 6 weeks. The bench has dispensed with the personal presence of Taneja.
The bench noted that the Attorney General has granted consent for initiating contempt action.
A bench comprising Justices Ashok Bhushan, R Subhash Reddy and MR Shah issued notice on the petition filed by law student Aditya Kashyap.

Senior Advocate PS Narasimha, appearing for the petitioner, stated that the tweets by Taneja were intended only to malign and scandalise the Supreme Court of India.

Attorney General KK Venugopal had granted consent to initiate contempt proceedings against her after observing that her caricatures amounted to "shaking the public confidence in judiciary ».

"The tweet is clearly calculated to undermine the public confidence in the independence and impartiality of the Supreme Court of India," the AG had said.

A Law student had thereafter moved the Supreme Court seeking initiation of criminal contempt proceedings against the comic artist.

"The three alleged posts in the form of cartoons/ caricatures have shaken the public trust and confidence in the judicial system of our constitutional democracy by directly attacking and making insinuations against the Hon'ble Supreme Court of India," the plea filed by a 5th Year law student Aditya Kashyap through Advocate Namit Saxena said.

The first tweet against which the AG gave consent for contempt was an illustration of (Indian news anchor) Arnab Goswami intimidating the Supreme Court by stating that the Bharatiya Janata Party is his "Father".
Referring to the same, the Petitioner said, "... on the face of it, the alleged contemnor has interfered with the administration of justice by portraying the Supreme Court and the current ruling party to be the father of the abovesaid journalist Mr. Arnab Goswami.

This is in view to generate an impression that being the father of the said journalist, the Supreme Court was bound to grant him warmth and protection by keeping an arm around his shoulder and there was some nexus with the ruling establishment for this. »
Published by Bado at 9:03 AM