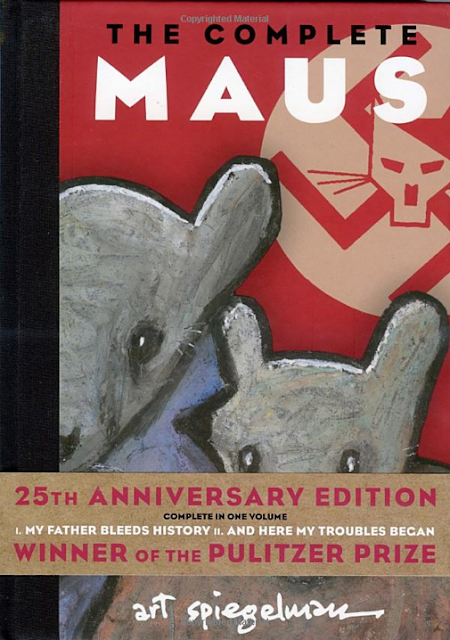 A Tennessee school board has voted to remove the Pulitzer Prize-winning graphic novel “Maus” from an eighth-grade language arts curriculum due to concerns about profanity and an image of female nudity in its depiction of Polish Jews who survived the Holocaust.
The Jan. 10 vote by the McMinn County School Board, which only began attracting attention Wednesday, comes amid a number of battles in school systems around the country as conservatives target curriculums over teachings about the history of slavery and racism in America.

“I’m kind of baffled by this,” Art Spiegelman, the author of “Maus,” told CNBC in an interview about the unanimous vote by the McMinn board to bar the book, which is about his parents, from continuing to be used in the curriculum.
“It’s leaving me with my jaw open, like, ‘What?’” said Spiegelman, 73, who only learned of the ban after it was the subject of a tweet Wednesday – a day before Holocaust Remembrance Day. 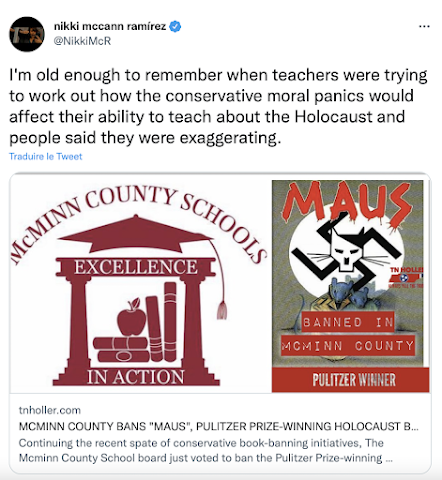 He called the school board “Orwellian” for its action.

Spiegelman also said he suspected that its members were motivated less about some mild curse words and more by the subject of the book, which tells the story of his Jewish parents’ time in Nazi concentration camps, the mass murder of other Jews by Nazis, his mother’s suicide when he was just 20, and his relationship with his father.

“I’ve met so many young people who ... have learned things from my book,” said Spiegelman about “Maus.” The image in the book that drew objections from the board was of his mother.

“I also understand that Tennessee is obviously demented,” said Spiegelman. “There’s something going on very, very haywire there.”

Tennessee has been won by every Republican presidential nominee since 2000. Then-President Donald Trump in 2020 won McMinn County with nearly 80 percent of the votes cast.

Neil Gaiman, the author of “The Sandman” comic book series and other award-winning works, blasted the school board’s action, writing on Twitter, “There’s only one kind of people who would vote to ban Maus, whatever they are calling themselves these days.”
Board President Sharon Brown did not immediately respond to an email requesting comment about the ban of Spiegelman’s book.

“Maus” depicts Jews as mice and the cats are Nazi Germans — who had a notorious history of banning and burning books. It has won a slew of awards, including a 1992 Pulitzer Prize.

Minutes from the Jan. 10 meeting of the McMinn School Board show that Director of School Lee Parkison opened the session by saying: “The values of the county are understood. There is some rough, objectionable language in this book and knowing that and hearing from many of you and discussing it, two or three of you came by my office to discuss that.”

Parkison said he had “consulted with our attorney” and as a result “we decided the best way to fix or handle the language in this book was to redact it.”

“Considering copyright, we decided to redact it to get rid of the eight curse words and the picture of the
woman that was objected to,” Parkison said.

But board members worried that might violate the book’s copyright, the minutes show.

One member, Tony Allman, was quoted in the minutes as saying, “Being in the schools, educators and stuff we don’t need to enable or somewhat promote this stuff.”

“It shows people hanging, it shows them killing kids, why does the educational system promote this kind of stuff, it is not wise or healthy,” Allman said, according to the minutes.

Julie Goodin, an assistant principal, replied to Allman, saying: “I can talk of the history, I was a history teacher and there is nothing pretty about the Holocaust and for me this was a great way to depict a horrific time in history.”

“Mr. Spiegelman did his very best to depict his mother passing away and we are almost 80 years away.
It’s hard for this generation, these kids don’t even know 9/11, they were not even born,” Goodin said, according to the minutes.
“For me this was his way to convey the message. Are the words objectionable? Yes, there is no one that thinks they aren’t, but by taking away the first part, it’s not changing the meaning of what he is trying to portray and copyright.”
Published by Bado at 12:00 AM