From The New Arab. 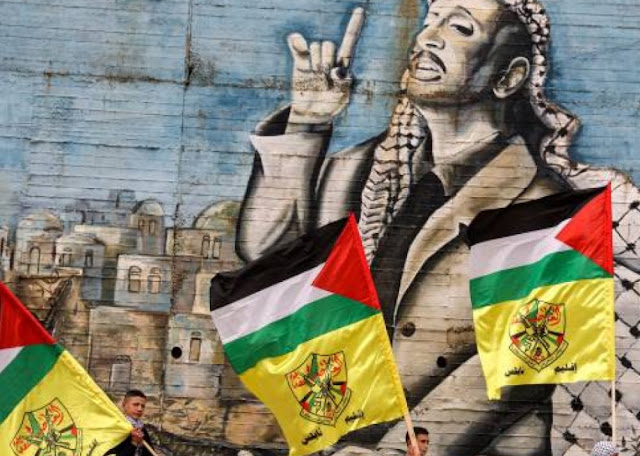 The Yasser Arafat Foundation announced on Monday the removal of all cartoons from a controversial exhibition it had organised in Ramallah.

The exhibition, titled "Palestine and Yasser Arafat", was inaugurated on Sunday by Palestinian Prime Minister Mohammad Ishtayeh at the Yasser Arafat Museum.

It included 104 artists from some 43 countries and some 350 works and was described as showing "solidarity with Palestine and the roots of Yasser Arafat’s memory in the international community".

The artworks represent the artists' depictions of Yasser Arafat "not the reality of who he was", the curators added.
But Palestinians - including political figures - felt that some of the artworks were "insulting" to Yasser Arafat and his memory.

Nasser Al-Qudwah, former president of Yasser Arafat Foundation and the head of an opposition coalition, wrote on Facebook that "the exhibition lacked criteria and honesty in representing Yasser Arafat".

Hossam Badran, a Hamas spokesperson, said: "This insult to Arafat from the middle of Ramallah and under official promotion [by the PA] is even a bigger mistake."

The Fatah movement, the party that was led by Arafat for 40 years, also condemned the exhibition.

A statement read: "The insult to Yasser Arafat is an insult to all the Palestinian people. We, therefore, call upon the Yasser Arafat Foundation to remove all the insulting works and apologise, or we will have to remove them ourselves."

Palestinian cartoonist Mohammad Sabaanah told The New Arab: "The exhibition was supposed to be a tribute to international artists who have supported Palestine through their work, but some Palestinian artists were excluded, and there is no other explanation other than their political views."

The foundation had assigned a number of experts to assess the works before they were displayed.

"However, when I found out that some prominent artists were not invited to participate I doubted the criteria behind the exhibition and I withdrew from it, even though I was invited," said Sabaanah.

"There was a clear infusion between political cartoon and caricature portrait, which is basically a satirical representation of a personality.

"Participations were obviously going to include satirical representations of Arafat, exhibited in the museum dedicated to his memory, which is what angered the public."

Late on Monday, the Yasser Arafat Foundation said in a statement: "What has been exhibited does not insult Yasser Arafat's personality nor symbolism… artists represented Arafat from their own artistic and cultural perspectives.

"All works exhibited have been removed due to lack of acceptance by the Palestinian public."
Published by Bado at 3:25 PM