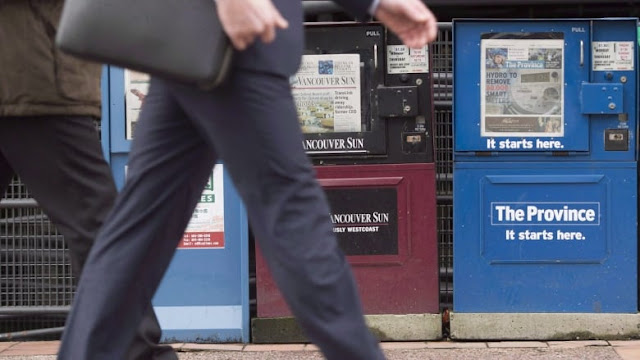 Postmedia Network Inc. says nine of its urban daily newspapers will no longer be printed and delivered on Mondays effective Oct. 17.
The Vancouver Sun, The Province, Calgary Herald, Calgary Sun, Edmonton Journal, Edmonton Sun, Ottawa Citizen, Ottawa Sun and Montreal Gazette will all be affected.
The ePaper versions of the affected newspapers — a digital replica of the print edition — will still be published on Mondays and the respective websites will still be updated with stories and news content.

Postmedia spokesperson Phyllise Gelfand says the decision was made as readers' habits continue to change.

Postmedia has a "robust digital offering'' and is focused on "going where [its] readers are,'' she said.

There are no jobs cuts tied to this move by the company, she added.

Postmedia experienced a $16.8 million net loss in its 2022 fiscal third quarter, according to a release, compared to a gain of $8.7 million the previous year.
The company linked the loss to numerous factors including a decrease in operating income and an increase in restructuring expenses.

It said the COVID-19 pandemic also resulted in 12 months of declines in advertising revenue.

In 2020, Postmedia notified unionized employees at the Vancouver Sun and The Province that it intended to reduce salary expenses by 15 per cent through voluntary buyouts or layoffs.