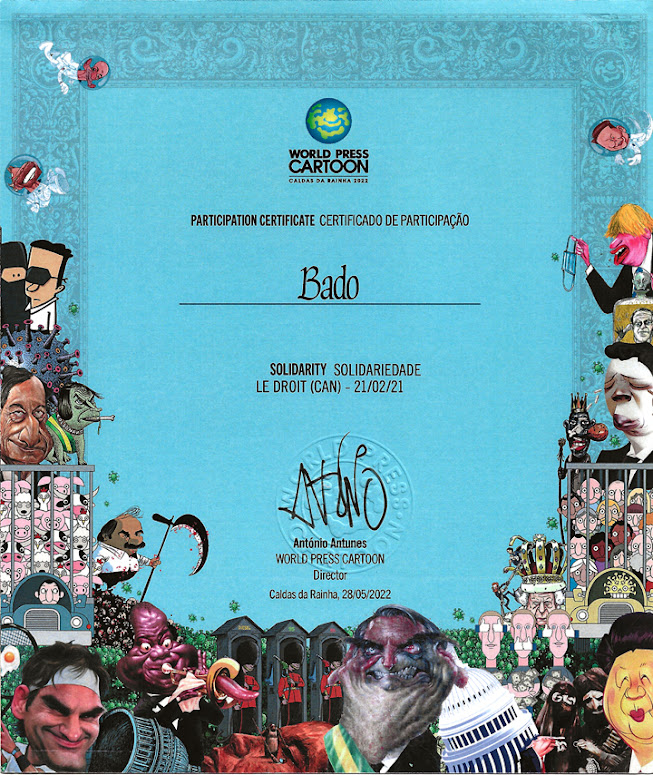 A cartoon I submitted has been exhibited and published in the catalogue of the 2022 edition of World Press Cartoon, in the Portuguese city of Caldas da Rainha.
More info>
Published by Bado at 12:00 AM No comments:

The European Press Prize has announced the Longlist of the third edition of the European Cartoon Award, founded in 2019 with Studio Europa Maastricht, to recognise courage and quality in the field of cartooning.
The 40 longlisted cartoons, selected from the hundreds that were submitted, will be part of an exhibition at the Beeld en Geluid Den Haag museum in The Hague from September 22, 2022.
The 16 cartoons that made it to the Shortlist will be announced next week.
More info>
Published by Bado at 11:16 AM No comments:

From the Sound and Vision Media Museum. 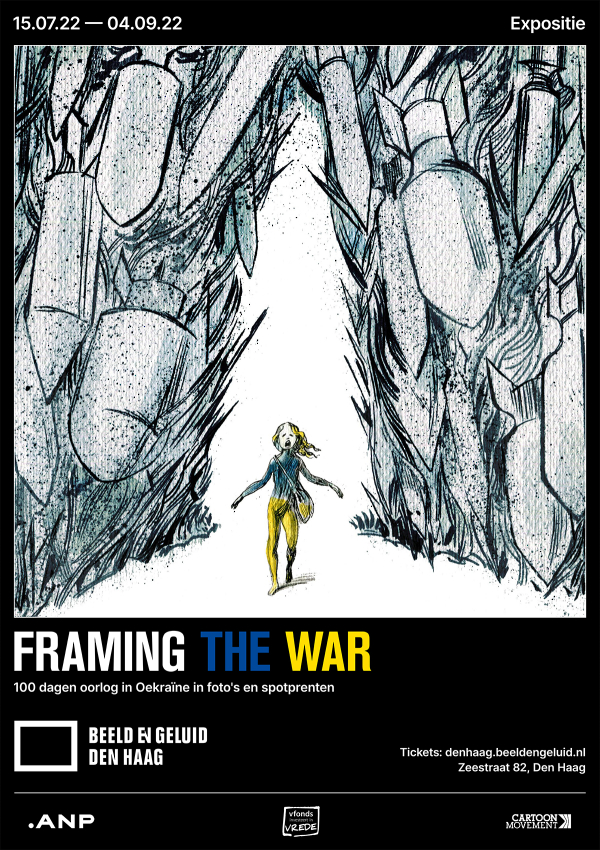 The exhibition is a collection of news photos and cartoons. It includes work by news photographers who stayed in Ukraine during the first 100 days of the war.
Cartoons were produced by, among others, Vladimir Kazanevsky (Ukraine), Gatis Sluka (Latvia), Tjeerd Royaards (Netherlands) and Emad Hajjaj (Jordan).
More info>
Published by Bado at 1:12 PM No comments:

Jim Morin Exhibition at the Ogunquit Museum of American Art

From The Portland Press Herald. 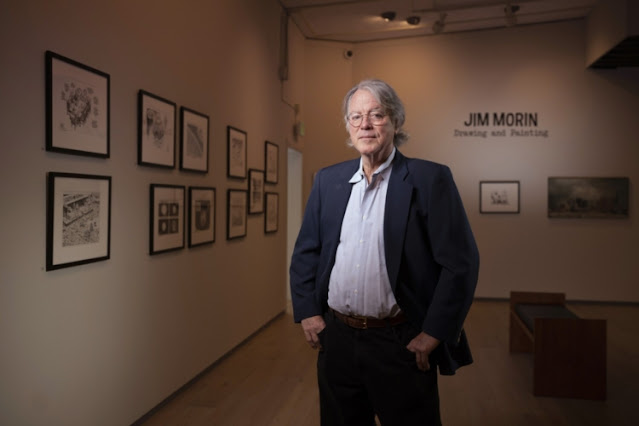 When people think of fine art, most imagine an artist fussing for weeks or months over every brushstroke, every subtle color variation.

Jim Morin rarely had that luxury of time.

Over more than four decades as an editorial cartoonist – much of it at the Miami Herald, where he twice won the Pulitzer Prize – Morin estimates he produced north of 10,000 ink-and-pen drawings, almost all of them on a daily deadline.
More info>
Published by Bado at 12:00 AM No comments:

His wife, Patricia Todd, said the cause of death, in a hospital, was heart and renal failure.
More info>
Published by Bado at 12:00 AM No comments:

Hand Drawn Life - The Film, directed by Tom Tanquary, is a documentary on the History and Influence of Newspaper Comic Strips.

There's a basis for claiming that newspaper comics were the first real form of American Pop Culture. The comic strips themselves played a major roll in creating the newspaper industry itself.
They were much more than just humor. They were the pulse of American Culture and an invaluable part of newspapers for almost a 100 years.
Published by Bado at 9:37 AM No comments: 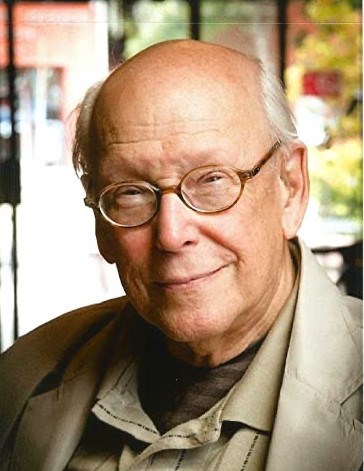 Robert C. Harvey, a longtime contributor to The Comics Journal and one of the industry’s most enduring, prodigious and personably provocative commentators on comics culture, passed away July 7 at the age of 85 due to complications from a fall.
For more than five decades, “Happy Harv” helped to determine, and sometimes define, the myriad discourse surrounding comics professionals, fans, teachers and scholars.
More info>
Published by Bado at 12:00 AM No comments:

From Schifferbooks.
This collection of over 140 curated posters by the revolutionary graphic artist Seymour Chwast provides context and insight into not only his five-decade career, but the poster genre itself.
Since founding Push Pin Studios alongside Milton Glaser and Edward Sorel in the 1950s, Chwast’s posters have been widely celebrated for their combination of subversive style and strong political satire.
More info>
Published by Bado at 12:00 AM No comments:

The CRTC, Pierre Vallières, the N-word and broader principles 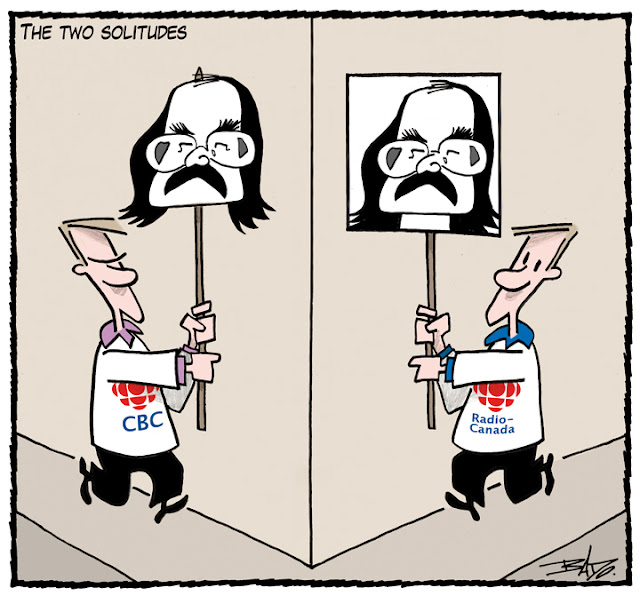 As you may have heard, Quebec has been roiled by a rather peculiar debate for the last two weeks: can someone legally say the N-word (in French) when quoting the title of an important political essay during a radio segment on Radio-Canada?

The debate arises from a recent decision of the CRTC, which ruled that uttering the word without proper warnings and attenuation measures was impermissible, even though, as the Board expressly acknowledged in its decision, “the word was not used in a discriminatory manner in the context of the segment, but rather to quote the title of a book that was central to a current issue.”
More info>
Published by Bado at 12:00 AM No comments:

A critique of fellow editorial cartoonists by "the artist formally known as Cam" draws the ire of Clay Jones.

This week marks the 25 year milestone since officially beginning my role on July 7, 1997, as staff editorial cartoonist at The Hamilton Spectator.
I had been editorial cartoonist for the chain of Hamilton area community newspapers known as Brabant, and I got my first start as a published cartoonist as a student at The Fulcrum, while attending the University of Ottawa in the late 1980s and early 90s.
Upon being hired 6000 editorial cartoons or so ago, the Internet was in its infancy, so while all of my cartoons many be found after 2000, ones before then have been added years after they originally appeared in print.
Many cartoons of major characters from the past quarter century can be found in my vast archives.
Published by Bado at 5:21 PM No comments: