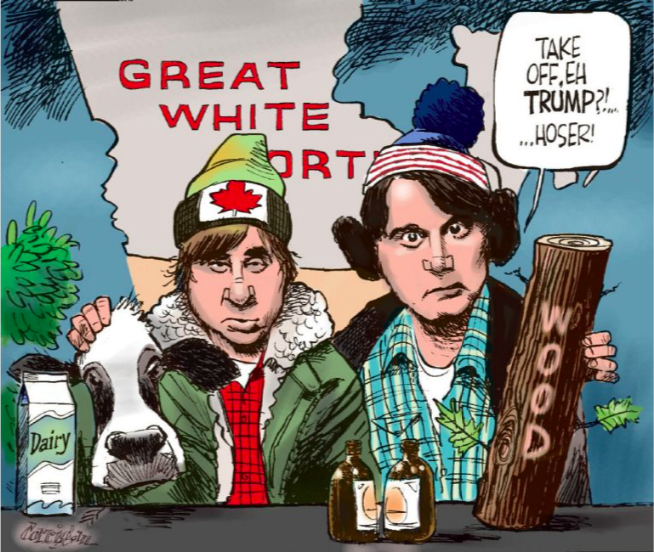 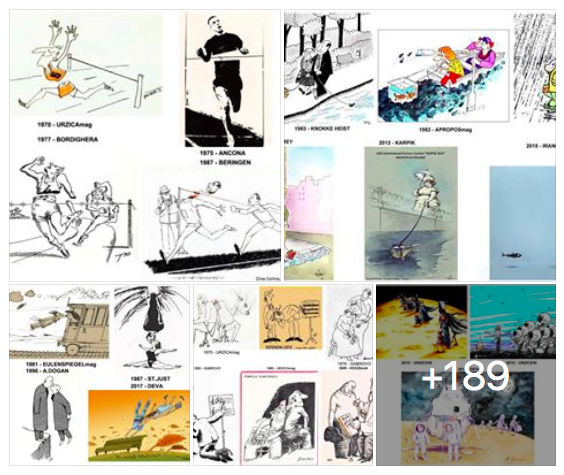 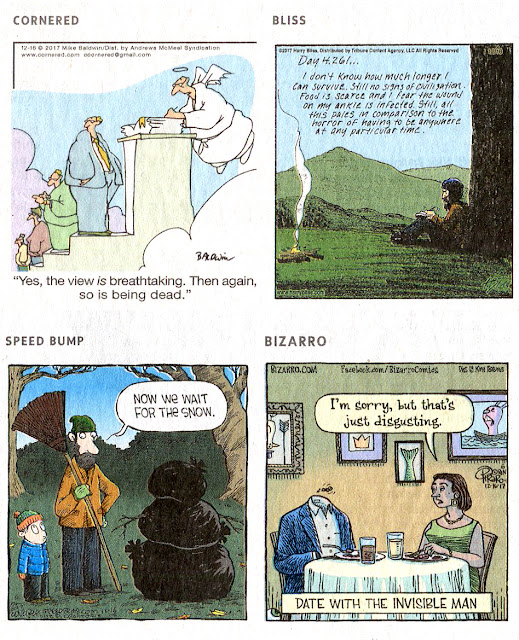 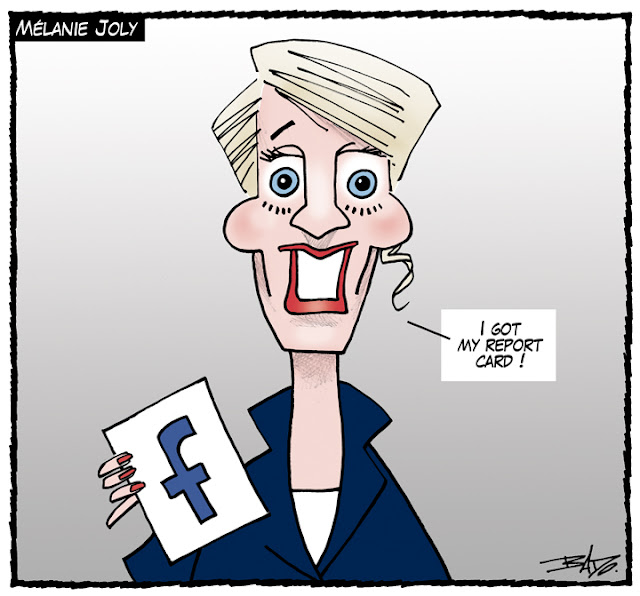 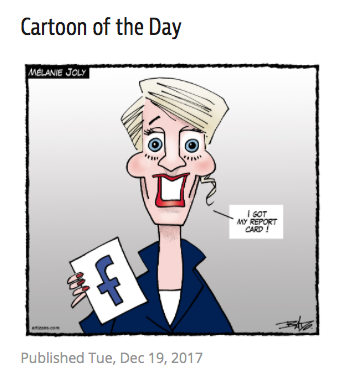 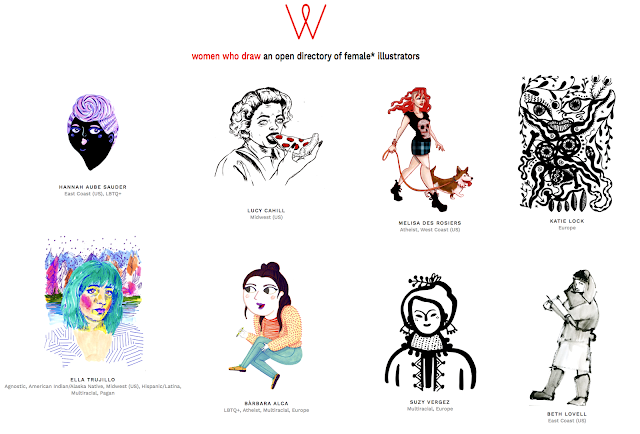 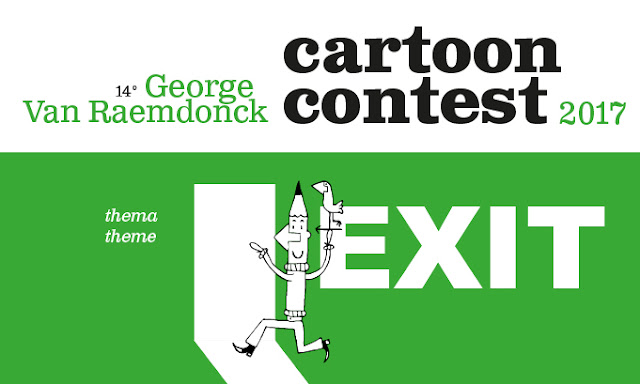 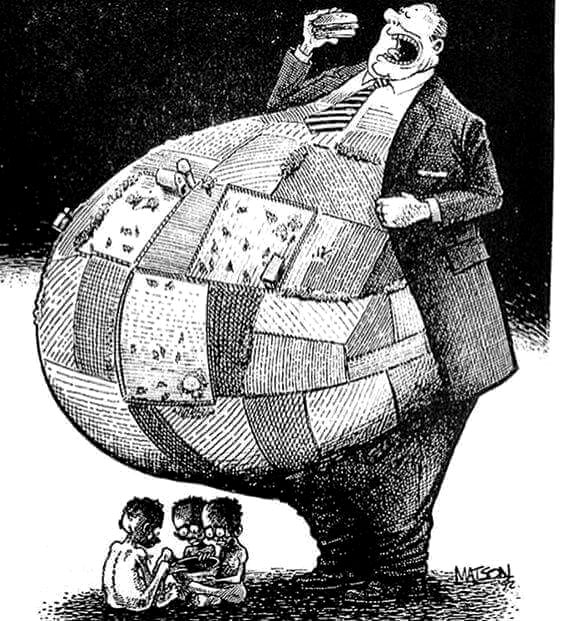 I came upon this cartoon by Bob Matson a few days ago but had a strange feeling of having seen it before.

It's a Dog's Life


Swedish cartoonist Riber Hansson announced last week that this year’s December drawing for the magazine Hundsport, where he has worked for 25 years, was unfortunately the last.

Here is a selection of "artists painting dogs" published in their pages:

Behind the Lines: Australia’s Best Political Cartoons of 2017


Australia has a rich tradition of political cartooning, nothing and no one is sacred, all politicians and policies may face the brute force of the cartoonist’s pen.

Behind the Lines: The Year’s Best Political Cartoons is an annual exhibition run by the museum bringing together a selection of the best works of the last year. 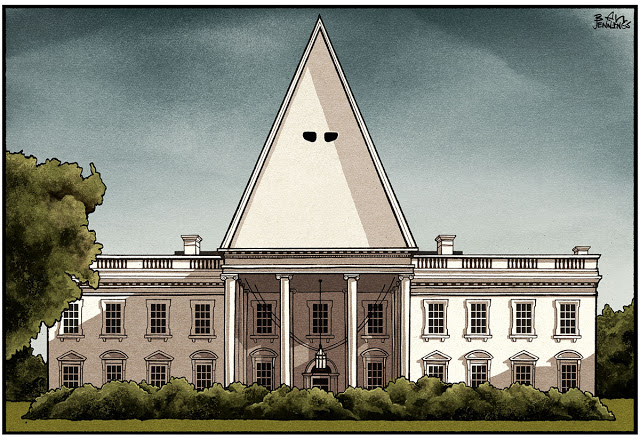 The Guardian's Ben Jennings won Political Cartoon of the Year for The White (Supremacist) House.

Internet users were invited to vote for their favourite British political cartoon of the year. The winners will be announced later today in London.

More info>
Published by Bado at 6:43 AM No comments:

From the American Bystander blog.

Welcome to the blog of The American Bystander, the all-star print humor quarterly.

We acknowledge the internet only grudgingly, but have decided to put down our buggywhips and create a cubbyhole online where we could stick a few pieces from each issue, and give our staff a place to publish timely stuff. Enjoy!

Out of nearly 180 cartoons featured in last year's edition of Britain's Best Political Cartoons not one was drawn by a woman.
More info>
Published by Bado at 12:00 AM No comments:

The wordless satire of Angel Boligán

Carol Hills in PRI The World. 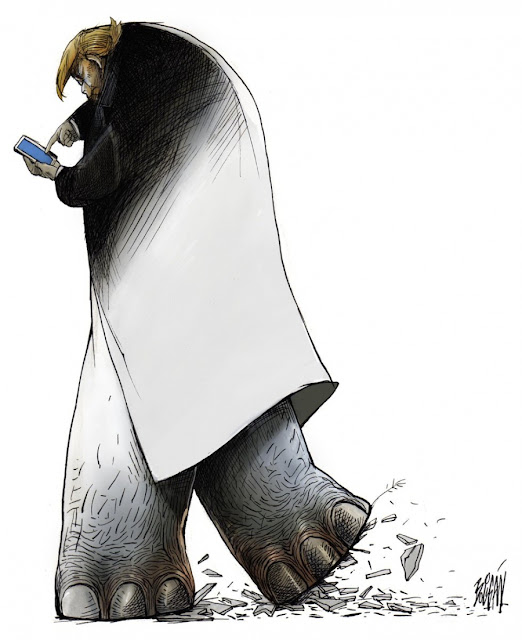 I received the catalogue of the Caldas da Rainha 2017 World Press Cartoon competition. 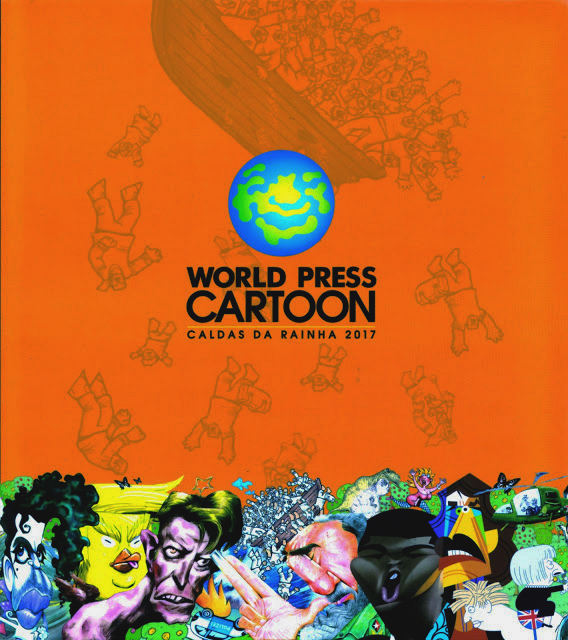 My Escher parody was selected in the gag cartoon category:
More info>
Published by Bado at 12:00 AM No comments: 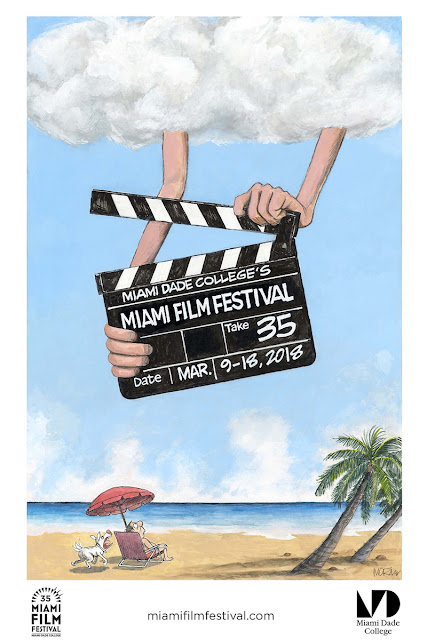 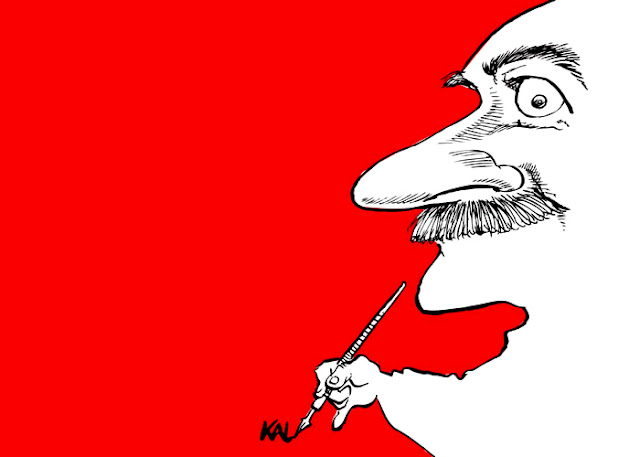 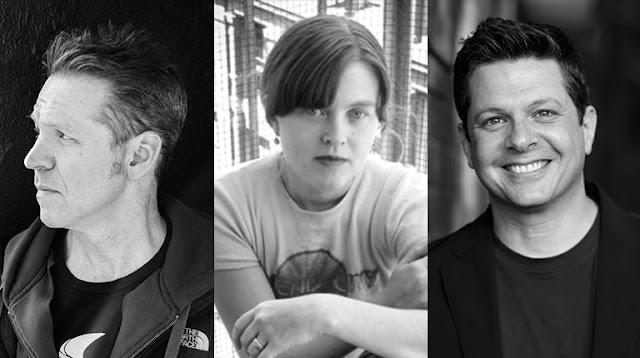 "Gagged: an Exhibition of Cartoons About Censorship & Repression" 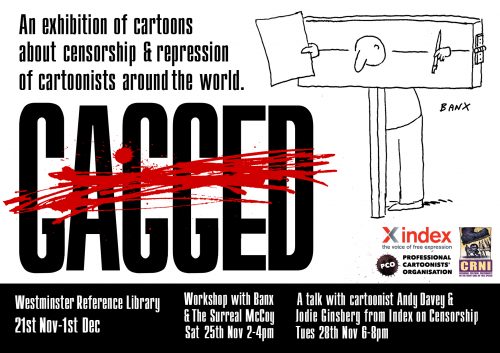 The Professional Cartoonists’ Organisation [UK] alongside Cartoonists’ Rights Network International and X Index bring the plight of persecuted cartoonists to the fore by presenting Gagged: an Exhibition of Cartoons About Censorship & Repression with works by cartoonists from around the world.

More info>
Published by Bado at 6:23 AM No comments:

He was initially questioned by security agents in relation to his cartoons that are critical of President Obiang and other government officials.
More info>
Published by Bado at 12:54 AM No comments: 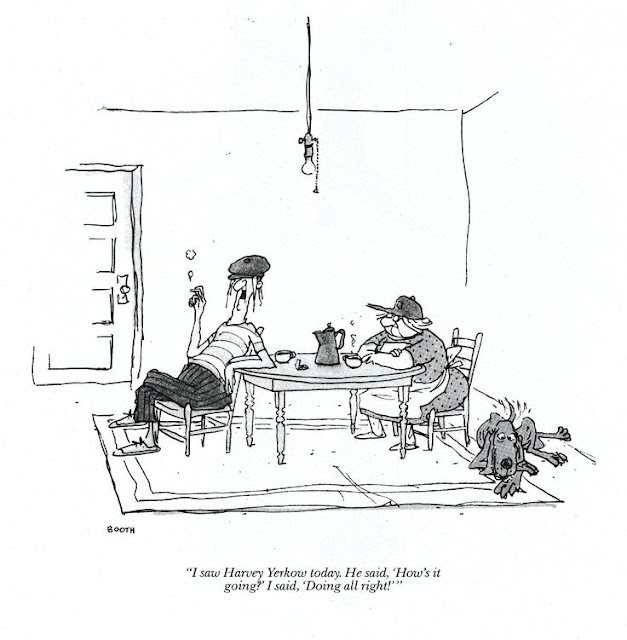 
The 2017 Annual Convention of the Association of American Editorial Cartoonists, hosted by Matt Davies (Newsday) and AAEC President Ann Telnaes (Washinton Post) will be held November 1-4 at Hofstra University in Hempstead (Long Island), New York in conjonction with the Satire & the City: Political Cartoon & Satire Festival.

More info>
Published by Bado at 7:39 AM No comments:

Celebrating Editorial Cartooning at the Society of Illustrators


Ten years ago, I was invited to be a part of an organization that changed my life. 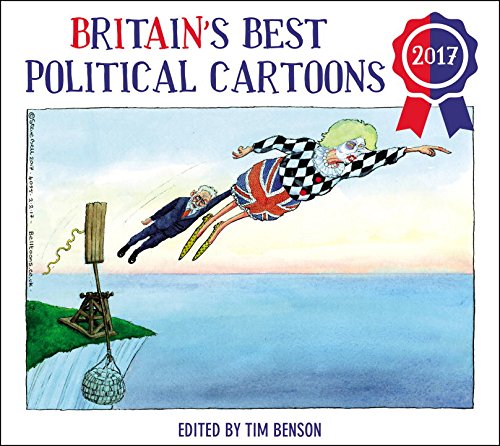 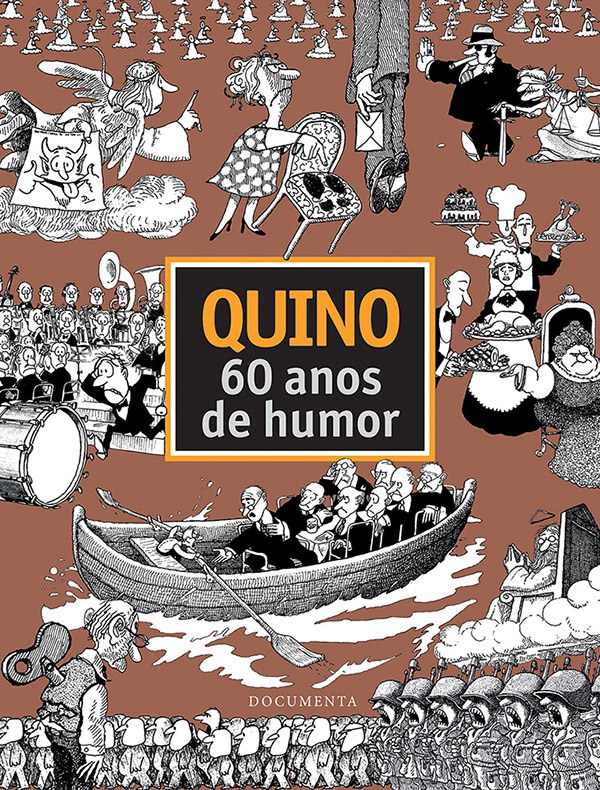 More info>
Published by Bado at 3:48 PM No comments:

How Barry Blitt became the master of the political moment 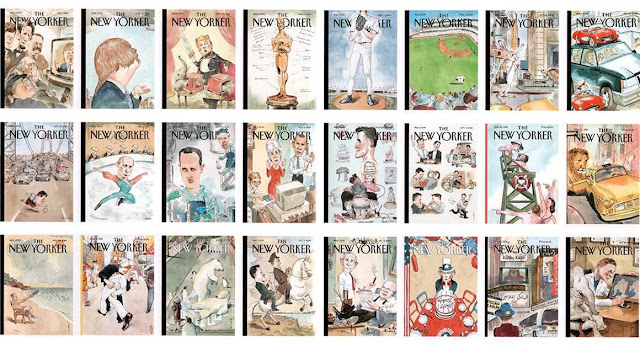 Nothing cuts through our over-taxed frontal cortexes like a simple visual joke. It skips past the language centers of our brains and engages lower brain stem humor with bright color and energetic line, working with an elegance and speed and directness unmatched by other kinds of satire.

There aren’t a lot of masters of this genre—it is, after all, the simplest and hardest form of cartooning. But certainly one of them is Barry Blitt. 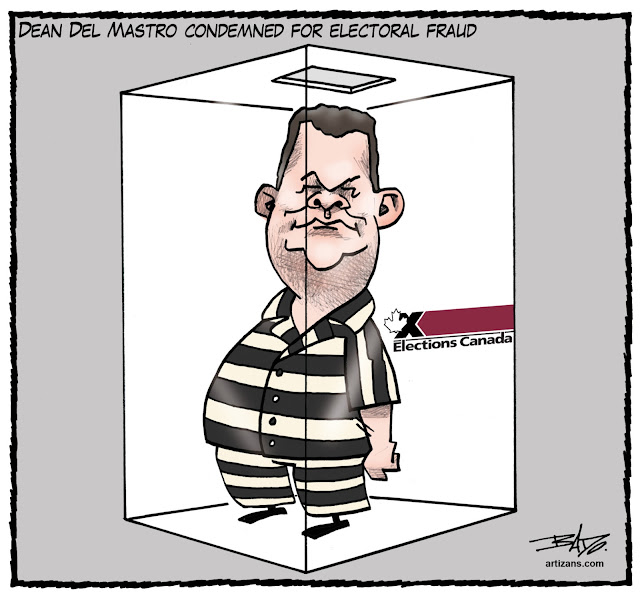 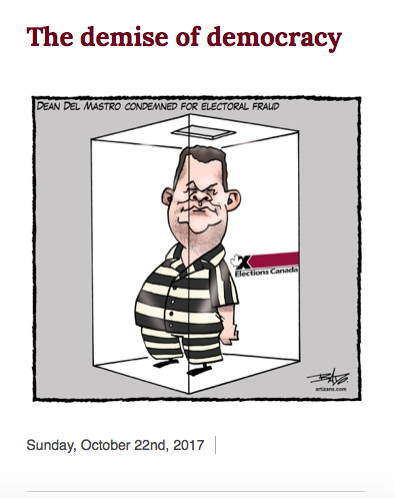 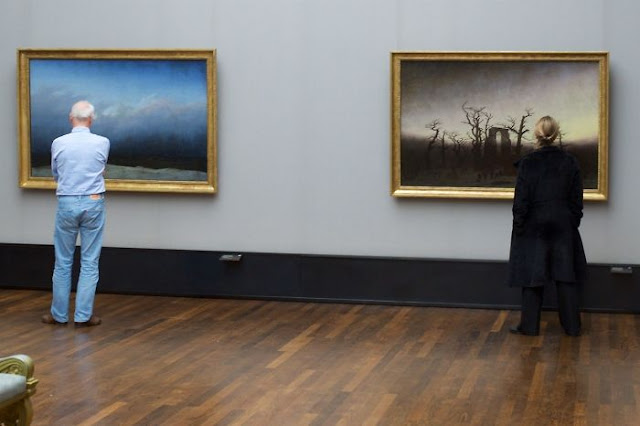 Photographer Stefan Draschan always keeps himself entertained at art galleries by creating his own art projects.


One of those projects is “People matching artworks”.

More info>
Published by Bado at 7:42 AM No comments:

The Billy Ireland Cartoon Library & Museum will be hosting the opening their new exhibition, Looking Backward, Looking Forward: U.S. Immigration in Cartoons and Comics on November 4th from 3 to 5pm.

In March 2014, 60 Minutes dedicated an entire segment analysing the history and process of getting your cartoon in the New Yorker.

New members of the ACC 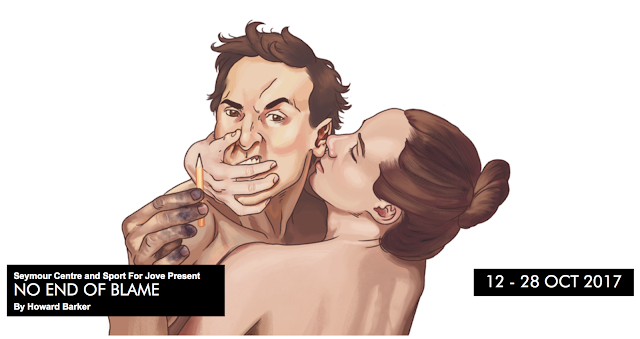 From the Associated Press. 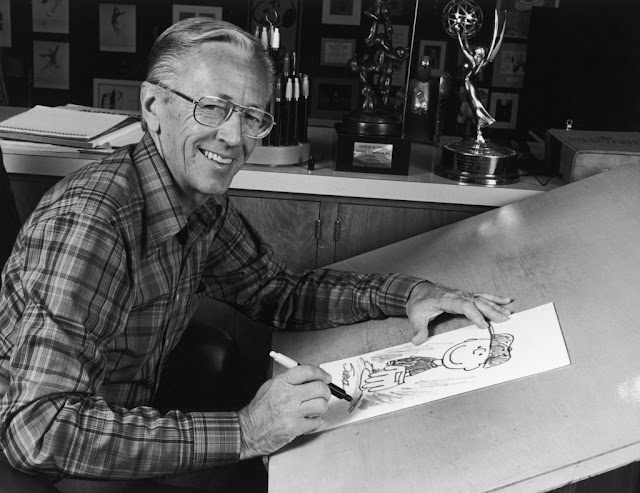 The home of Peanuts creator Charles Schulz burned to the ground in the deadly California wildfires but his widow escaped, her stepson said Thursday.

Jean Schulz, 78, evacuated before flames engulfed her hillside home Monday and is staying with a daughter, Monte Schulz said. 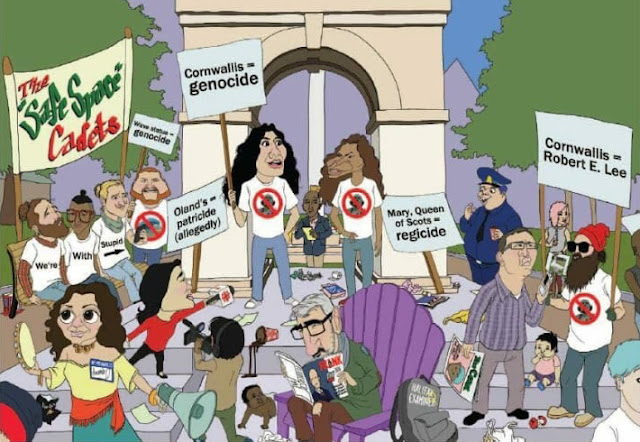 A cartoon in Frank  satirical magazine that depicts a black poet and activist with a jutting chin and sloping forehead is being modified after critics who call it racist launched campaigns to remove the magazine from stores.
More info>
Published by Bado at 12:00 AM No comments: