The world will end tomorrow 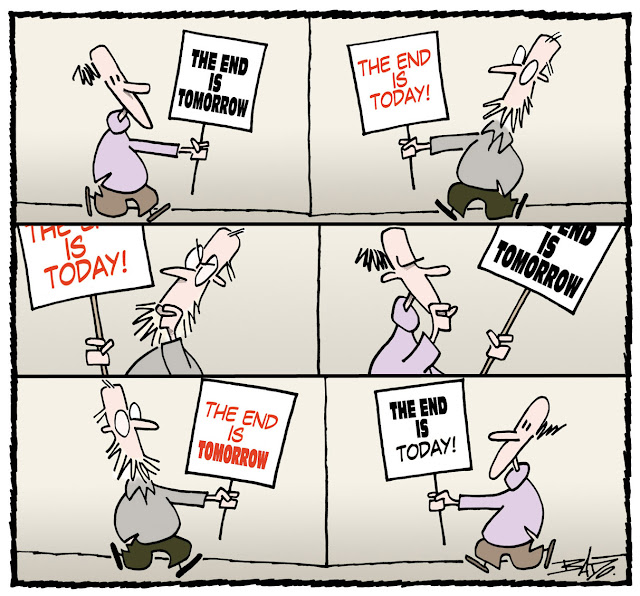 I only hope this doesn't spoil my birthday (tomorrow). 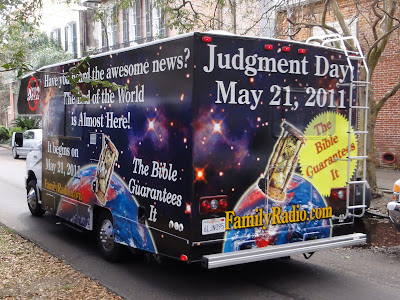 Here is an interesting column by Dan Gardner of the Ottawa Citizen on the subject:

Rather awkwardly for the evangelist who said the world would end May
21, it did not. But Harold Camping is an irrepressible fellow and,
after further study, he announced that he was merely off on timing.
The world will end Oct. 21. Really.

The purpose of this column is not to have a laugh at poor Camping,
tempting as that is, or to boast that I predicted both outcomes, which
I did. It's to remind people that this is much more than a silly
little story about a kook and the people who believe him.

Harold Camping and his followers are not insane or unusually stupid.
They are ordinary people. I'm sure some are quite intelligent.

But smart or not, ordinary people find it very difficult to admit,
even to ourselves, that a sincerely held belief is wrong.

That's especially true when our commitment is substantial. We ignore
evidence. We make excuses. We twist logic. We rationalize like crazy.

Whatever it takes, we find a way to safeguard our cherished belief and
cling to what should be discarded -unless we learn to be as critical
of our own thinking as we are of others.

This is Cognitive Dissonance Theory 101. Listening to the radio while
driving home Monday, I heard a perfect illustration.

Mockery of Harold Camping was all over the dial, of course. But then I
happened to catch investment adviser John Budden, who was talking
about something called "the Kondratieff cycle" and what it revealed
about our economic future. I smiled. The juxtaposition was too
perfect.

Nikolai Kondratieff was a Soviet economist of the 1920s who looked at
a little more than 200 years of price and production data in various
countries and concluded there was a recurring wave in capitalist
economies that rose and fell over a period of about 50 years. The
"falling" part was acceptable to the Soviets. The "rising" part
wasn't. Kondratieff was executed in 1938.

But then came the 1970s and simple addition brought Kondratieff back
into fashion: Add 50 years to the date of the stock market crash that
ushered in the Great Depression and you get 1979. Investment banker
David Rosenau and journalist James Shuman -who would go on to work in
Gerald Ford's White House -issued the warning in their 1972 book The
Kondratieff Wave.

The 1970s would be a decade of "high prosperity, full employment, no
inflation, and peace and plenty." If that did not come to pass, the
authors said, "it will mean that the Kondratieff wave is only a
statistical illusion."

It did not come to pass. The 1970s was a miserable decade. High
inflation, unemployment, and crime. Low growth. Moribund stock
markets. So the Kondratieff wave was only a statistical illusion,
right?

Of course not. As the 1970s sank into "stagflation" and pessimism,
Kondratieff became more popular than ever. Amid the gloom of 1974, the
historian Geoffrey Barraclough reviewed Rosenau and Shuman's book,
along with many others, in the New York Review of Books, and
confidently concluded that the Kondratieff cycle was real and, as bad
as things were, they were about to get much worse. In a 1976 book,
investment adviser Joseph Granville used Kondratieff to predict a
crash and a depression, beginning in 1983.

As it turned out, a long boom started in 1983 but the Kondratieff
devotees were not impressed. Investment adviser Robert Beckman
predicted that "the Second Great Depression" -"far worse than that of
the 1930s" -would hit in the mid-1980s.

There was no depression in the mid-1980s. But again it did not matter.
In 1985, Joseph Granville published another book in which he explained
that "the length of the (Kondratieff) cycle could vary between 48 and
60 years" and so the fact that he had predicted a depression would
start in 1983 didn't mean he was wrong. After all, the economy had
boomed during the 1920s, before crashing. Hence, despite outward
appearances, Granville was right.

There are literally dozens more stories like this, through the
decades, but still the believers cannot be convinced they are wrong.
They are committed to the Kondratieff cycle, just as fierce partisans
are committed to political parties, and Harold Camping is committed to
the End Times.

Incidentally, the reader may have noticed that a remarkable number of
the Kondratieff devotees in the past have been investment advisers.
The same is true today. Indeed, there's a not insignificant
probability that your retirement plans hinge on the judgment of
someone whose faith is as blind as that of Harold Camping.

Which is more frightening than anything old Harold says.

dgardner@ottawacitizen.com
Published by Bado at 10:14 AM