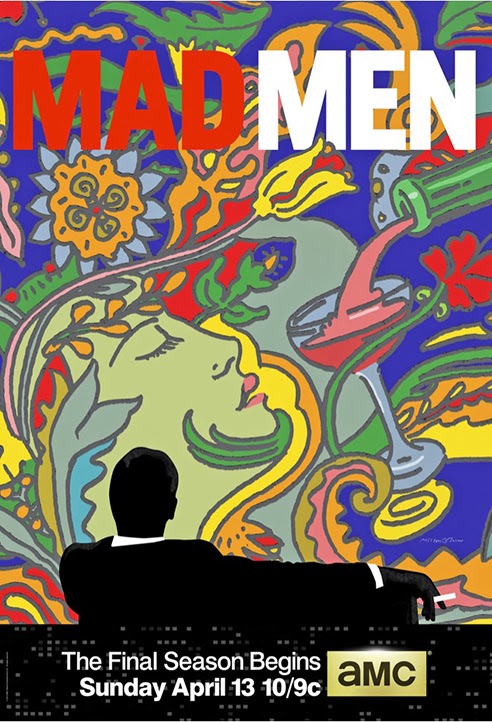 The New York Times reported on Friday that Milton Glaser was enticed to return to the psychedelic graphic style that helped put him on the map in the ’60s. It is for the campaign promoting the new and final season of “Mad Men,” which takes place in the epoch of sex, drugs and rock n’ roll. What a brilliant idea! The man behind the Dylan poster reprising the ’60s.

Glaser’s timely style was a mnemonic for ’60s youth culture and signpost for their parents. I became aware of Glaser through his posters for WOR-FM that premiered in 1966. The radio station was known for two great DJs, Murray (Kaufman) the K (I went to school with his son Keith) and Scott Muni, who went on to help found WNEW-FM, the greatest of all “progressive rock” stations. Glaser’s posters were breaths of fresh-air amidst all the marketing aimed at the middle-aged and middle-class.

Victor Moscoso, the seminal psychedelic poster artist, credits Glaser as an inspiration for his approach. And Peter Max, who made his career doing fairy tale psychedelics, briefly worked at Push Pin Studios where he developed his signature style.

A year after the WOR-FM campaign, Glaser was assigned a cover for LIFE magazine (1967) on the “Return of the Red Man,” a report on the resurgence of interest in the unfair treatment of Native Americans in the U.S. Glaser’s fold out, double-truck drawing was a radical departure from anything that the influential photo magazine, LIFE, had done before.

I was totally smitten by this pop art aesthetic that combined aspects of Art Nouveau and Art Deco with an entirely contemporary, vibrating color scheme. Apparently, “Mad Men” creator Matthew Weiner was impressed by the WOR-FM poster, which he recalls hanging on his parents’ wall. Rather than hire an imitator, he went straight to the source. After some hesitation about returning to past methods, Glaser took on the project, which hits the streets, buses and subways this week.