The Doug Wright Awards Nominees for 2014

The Doug Wright Awards have announced their nominees for 2014. The Awards event takes place during the Toronto Comic Arts Festival.

The nominees for the 2014 Doug Wright Award for Best Book are:

The nominees for the 2014 Doug Wright Spotlight Award (a.k.a. “The Nipper”) which recognizes Canadian cartoonists deserving of wider recognition are:

• Connor Willumsen for Calgary: Death Milks a Cow, Treasure Island, Mooncalf, and Passionfruit
• Dakota McFadzean for Other Stories and the Horse You Rode in On (Conundrum Press)
• Patrick Kyle for Distance Mover #7 – 12, New Comics #1 – 2
• Steven Gilbert for The Journal of the Main Street Secret Lodge
• Georgia Webber for Dumb # 1 – 3

And the nominees for the 2014 Pigskin Peters Award, which recognizes the best in experimental or avant-garde comics, are:

A feature event of the Toronto Comic Arts Festival (TCAF), The Doug Wright Awards are pleased to announce that the pioneering artists of the Second World War “Canadian Whites” comics will be formally inducted into The Giants of the North: The Canadian Cartoonists Hall of Fame during the ceremony on Saturday May 10, 2014 in Toronto.

The Canadian Whites were black-and-white comics produced between 1941 and 1946 that contained a host of original (and iconic) Canadian characters such as Johnny Canuck, Canada Jack and Nelvana of the Northern Lights. These characters were created by the likes of Murray Karn, Adrian Dingle, Gerry Lazare, Leo Bachle and Jack Tremblay. The event will also serve as the official launch of a new collection of the complete Nelvana of the Northern Lights (by Adrian Dingle) being published by CGA Comics. 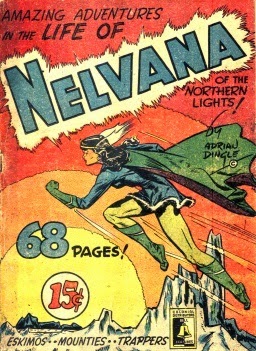 To mark its 10th anniversary, The Doug Wright Awards will also be publishing a commemorative book that will include past art and memorabilia, along with original interpretations of Doug Wright’s “Nipper” comic by artists such as Seth, Chester Brown, Joe Ollmann, Pascal Girard, Michael DeForge, and more. The project will be supported by a Kickstarter campaign.

The finalists for the 2014 Doug Wright Awards were chosen from a long list of more than 150 works and submissions published during the 2013 calendar year. This year’s nominating committee included Jerry Ciccoritti, Betty Liang, Rachel Richey, Chris Randle and Chester Brown.

About the Doug Wright Awards

Founded in 2004, The Doug Wright Awards recognize the best in English-language comics (or translations of French) by Canadian cartoonists. Now in their 10th year, the awards will be handed out at a ceremony at Toronto’s Marriott Bloor Yorkville Hotel on Saturday May 10, 2014 from 7:00 – 9:00 pm.

Founded in 2003, The Toronto Comic Arts Festival exists to promote the breadth and diversity of comics, and what is considered comics, as a medium of high literary and artistic value. The next Toronto Comic Arts Festival takes place in Toronto, Canada, on May 10th and 11th, 2014. It will feature beloved authors and graphic novelists from around the world, including Moyoco Anno (Japan), Christophe Blain (France), and Canadian Cartoonist Hall of Fame member Lynn Johnston, creator of For Better or For Worse.

For more information visit torontocomics.com.
Published by Bado at 2:00 AM