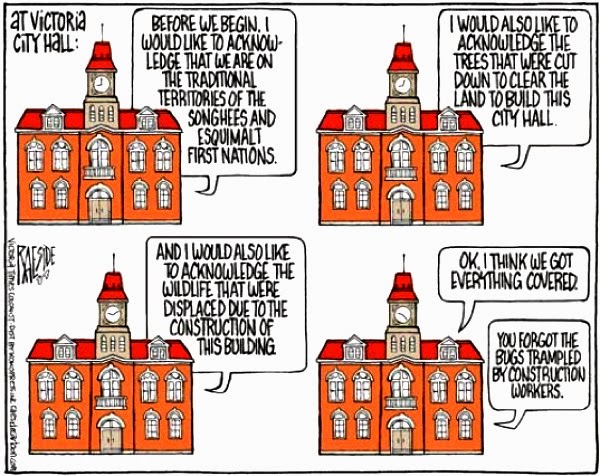 Adrian Raeside has posted an apology for an interpretation of one of his recent cartoons that ran in The Times Colonist. The First Nations leaders felt they were put down by being compared or associated with bugs.

The Huffington Post has a good article on the controversy. A snippet of Adrian’s apology is below. Visit the Times Colonist for the whole thing.


I have been getting a lot of angry e-mails and tweets over this cartoon, from people who are convinced that it is a put-down of First Nations. For the record, I have absolutely no objection to the acknowledgement of the traditional lands of the Songhees and Esquimalt First Nations.

The cartoon is about the empty mouthing of a mantra that appeases the non-indigenous conscience without any meaningful effort to make things better. It is a perfunctory statement not backed by action.
…

The cartoon took a shot at the people who say the right things but take no action— they were the ones I was trying to offend. It appears I offended everyone but them. For that, I am truly sorry.