The Return of Cartoonist Jules Feiffer 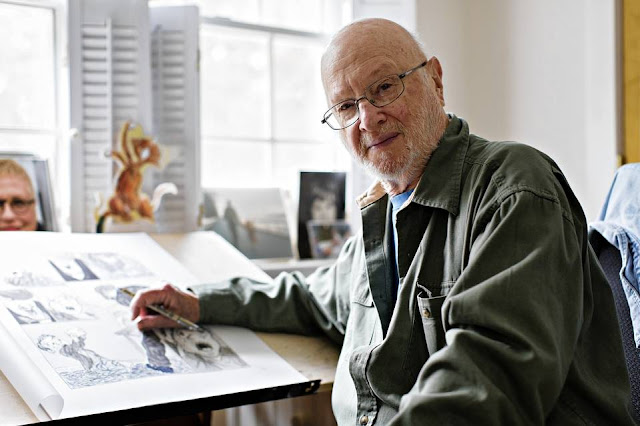 Jules Feiffer, 86, won the Pulitzer Prize for editorial cartooning in 1986 and is author of more than 35 books, plays and screenplays, including “Backing Into Forward: A Memoir.” His first graphic novel is “Kill My Mother” (Liveright, 2014). He spoke with Marc Myers.

My first memory of the Bronx was trying to escape. I grew up in a four-story building on Stratford Avenue in apartment 2F. It was the Depression, and from the movies I assumed everyone outside of New York had a butler. I could see train tracks from our apartment and imagined I’d hop a freight car one day with Woody Guthrie.

People in my neighborhood didn’t know they were poor. Most families had fathers who were unemployed. My father, Dave, was a salesman and was out of work for much of the 1930s. He wanted to be a dental technician, but the chemicals destroyed his hands. He tried to open various shops, but they closed 15 minutes later. He just didn’t have the instincts of a businessman.

My mother, Rhoda, was the family breadwinner. She was a fashion designer of women’s cloaks and men’s suits. She’d make watercolor drawings of her designs and take them to Manhattan’s garment district. She’d go door to door selling her designs for $3 a pop. She saw the Depression as an assault on 2F and my father, the bum. I had to rise above the weakness of my dad. He was actually a gentle and accepting man, and he loved my mother. We weren’t a screaming, yelling family. There was just an atmosphere of silent blame from my mother that my father accepted manfully.

I was the middle child, with two sisters, Mimi and Alice. I was skinny and looked much younger than my years. I looked helpless because I was, and tried not to leave our two-bedroom apartment if I didn’t have to. Most of the bullies ignored me since I was too small to beat up and there was no claim to glory for doing so. Even kids younger than me could beat me up. So I turned to reading and drawing comics. I had to draw myself out of my predicament.

I began drawing at age 3, and the more I drew, the better I became. I soon discovered that if I took this skill out in the street using chalk, the kids shooting marbles and playing stickball noticed me. I’d draw characters like Popeye, Tom Mix and Dick Tracy on the sidewalk, and I became the only cartoonist on the block. I was allowed to live. Drawing was my way out of the Bronx.

My mother always encouraged me to draw. Cartooning in the 1930s and early ’40s was a big deal. The comic strip was in its glory, and writing and drawing them came with a degree of aristocracy.

When I was little, I shared a room in our apartment with my older sister, Mimi. She moved out right after high school to Greenwich Village. I got the bedroom, and my mother bought me a drawing table. We both worked in there. When I was 13, she dragged me by the hand to the Art Students League in Manhattan to take an anatomy class taught by Robert Beverly Hale, before he became curator for contemporary American art at the Metropolitan Museum.

In January 1951, I was drafted into the Army. My hope was that I wouldn’t be sent to Korea. To make sure that didn’t happen, I took samples of my work along and showed everyone in sight. They sent me to Long Island City, to the Signal Corps Photographic Center, where training films for GIs were made.

Months later, the Army realized it was 80% over its allotment for the unit and I was transferred to Fort Gordon in Georgia. I discovered hate down there. I was discharged in 1953, and in 1956 I began drawing my strip for New York’s Village Voice until I was fired in 2000 because they said they were paying me too much money.

After the Voice let me go, my friend, author Roger Rosenblatt, called. He said he was starting a writing program at Stony Brook University in Southampton and insisted I move out to teach. I lived in several places before settling in a rental in the Northwest Woods area of East Hampton in 2013. The house is beautiful and spacious, with four bedrooms. It reminds me of how I had always dreamed of living as a kid.

When I moved out here, I had come to believe that the social and political cartoons that had made up most of my career had become repetitive. I turned to the graphic novel. Now, at 86, I find myself writing and illustrating the stuff I loved most as a kid but didn’t know how to draw in apartment 2F.