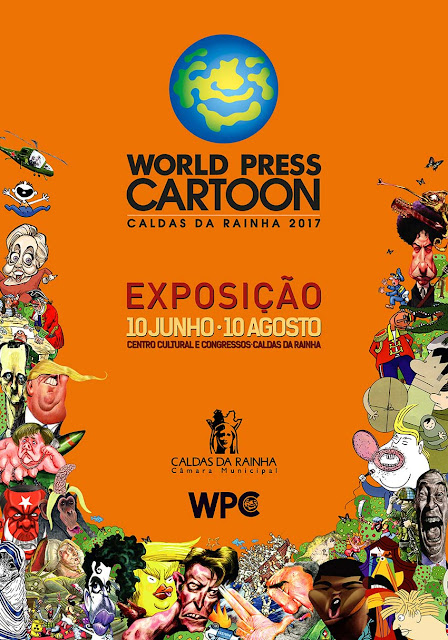 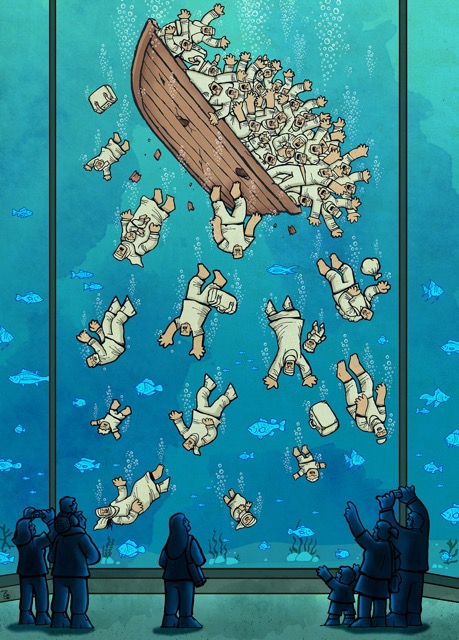 The cartoon «Immigrants» by Iranian cartoonist Alireza Pakdel, published in the newspaper «Etemad» in August 2016, was awarded the Grand Prix of the 12th edition of World Press Cartoon.

First prize in the Editorial Cartoon category, the author received a monetary prize of 10,000 euros. 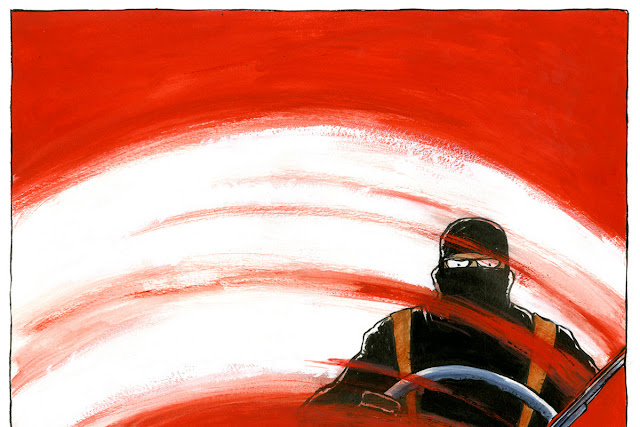 Also in this category, the jury awarded the 2nd prize to «Nice Attack», published in the newspaper Efimerida Ton Syntakton, by Michael Kountouris from Greece. 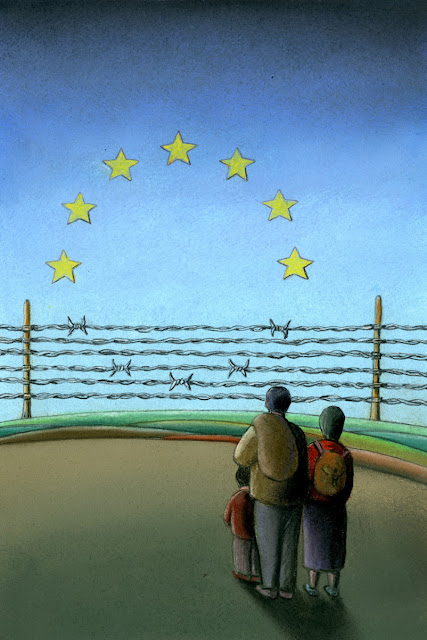 The awards ceremony took place in a show where humour reigned, with the presence of important personalities from international cartooning and the cultural landscape of Caldas da Rainha, the city hosting the 2017 event.

The salon director, the Portuguese cartoonist António Antunes, highlighted the important role that humour has for the vitality of the press: «Cartoons are a critical segment and an exercise of freedom, without which newspapers can not survive and fulfil their social and civic goals.»

The mayor of Caldas da Rainha, Fernando Tinta Ferreira, highlighted the international projection that World Press Cartoon brings to the city: «This is an event that brings to Caldas da Rainha great artists from all over the world who find, as is our tradition, an environment conducive to creation in freedom.

In a city marked by the work of the great caricaturist tradition of Rafael Bordalo Pinheiro it is natural and logical this connection to a contest that celebrates what is best done in the world in this art.» 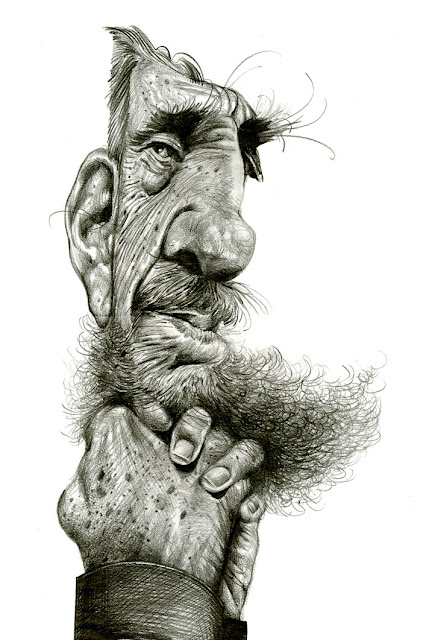 In Caricature, two winning pieces came from Brazil: a Fidel Castro by Luiz Carlos Fernandes, published in the magazine Veja, and a Bob Dylan by Eduardo Baptistão, published in Diário do Grande ABC, first and second prizes respectively. 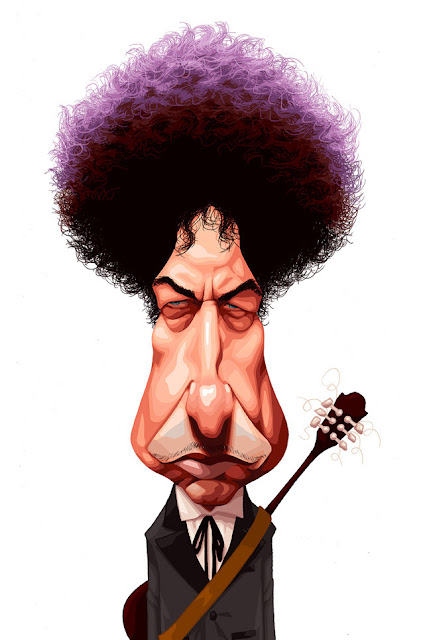 The 3rd prize, for a «Trump Punk» from the pages of the newspaper Unità, was awarded to the Italian artist Mariagrazia Quaranta. 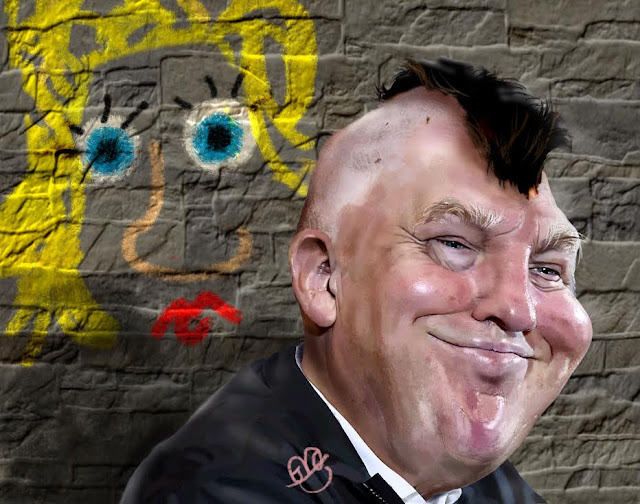 In the Gag Cartoon category, the first prize was awarded to Serbian Toso Borkovic, for the work «The Speaker» published in Ilustrovana Politika, 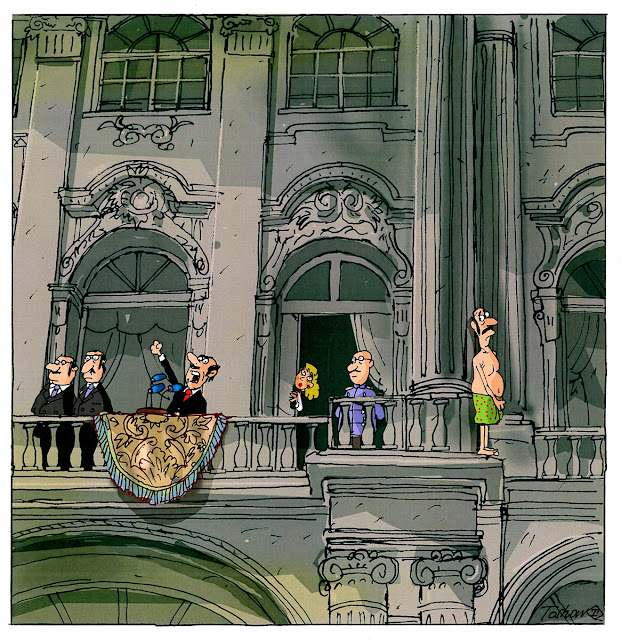 the 2nd prize went to «Rio», from Swiss Silvan Wegmann in Schweiz am Sonntag, 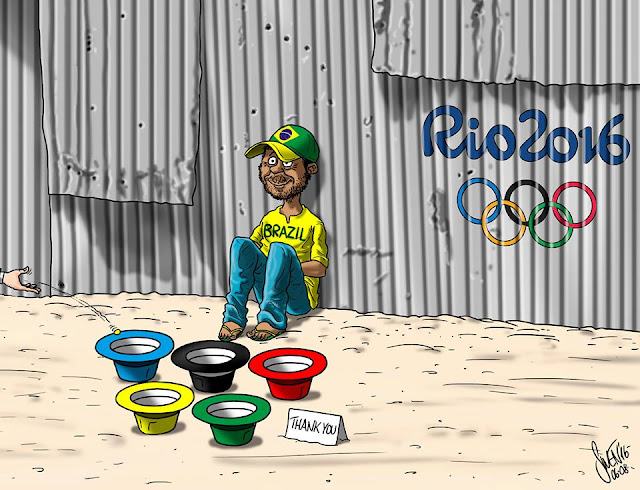 and the 3rd prize distinguished «Ludopatia», from Ecuadorian cartoonist Xavier Bonilla, published in Our World. 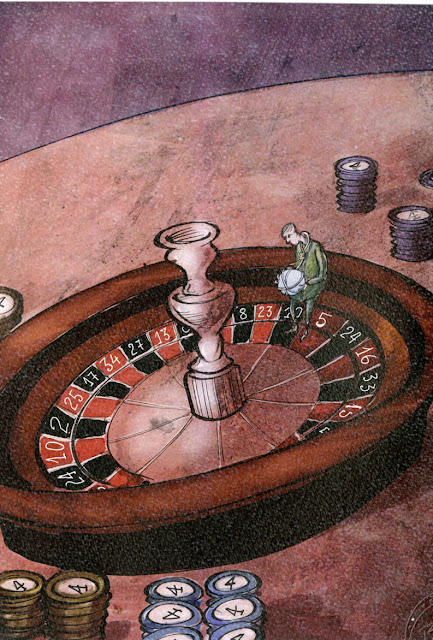 All these cartoons are part of the selection made by an international jury among the hundreds of works presented to the contest and coming from all continents.

This selection of the 267 best competing works forms the exhibition that will be open to the public at the Cultural and Congress Center of Caldas da Rainha, with free admission, from June 11 to August 10.

Cartoons that shape a fun portrait of the world, were published in 168 newspapers and magazines in 51 countries.

The visitor can take all these drawings home by purchasing the beautiful catalogue, for sale at the exhibition site.