From The Philadelphia Daily News-Inquirer. 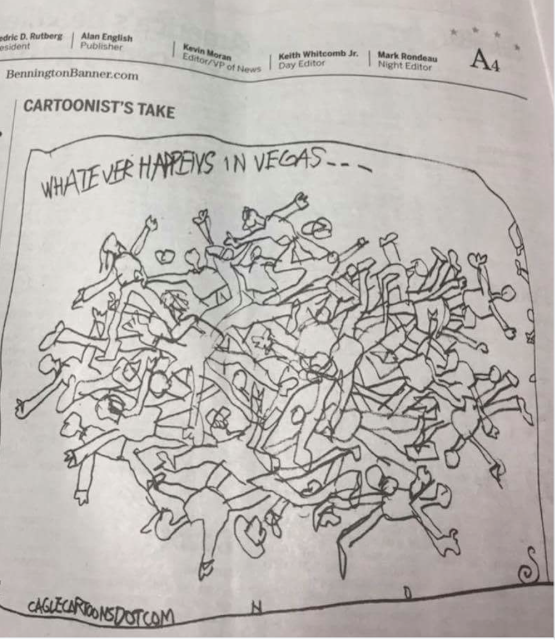 Two small newspapers, one in Vermont and another in Iowa, have apologized after running a controversial cartoon about the deadly shooting in Las Vegas that left 59 people dead and hundreds more injured.

The cartoon, drawn by syndicated political cartoonist Randall Enos, shows a pile of dead bodies under the caption, “What ever happens in Vegas…”

The Bennington Banner in Bennington, Vt., and the Telegraph Herald in Dubuque, Iowa, both apologized for publishing it.

The cartoon was quickly blasted by readers on the Banner’s Facebook page and across social media as “tasteless and disgusting.”

Fredric Rutberg, the president of New England Newspapers, which owns the Banner, said he personally found the cartoon “to be insulting and in bad taste.”

“We regret and apologize for publishing the cartoon,” Rutberg said in an apology published in Wednesday’s newspaper.

“The decision to publish was made in haste. We are addressing the matter internally.”

Kevin Moran, the Banner’s executive editor, said: “Our interpretation of Randall Enos’ cartoon was that little would be done with regard to gun control measures in the United States even after such an unprecedented tragedy.

While we believe that is a conversation that needs to happen in this country, we must first mourn and honor the victims and provide comfort to their families and friends.”

Adding to the outrage for readers was the fact that Sandra Casey, who died in the shooting, was a native of Dorset, Vt., which is in the Banner’s coverage area.

According to the Burlington Free Press, Casey was a 35-year-old special-needs teacher living in Redondo Beach, Calif., who attended the country music festival in Las Vegas with her fiancé and a friend.

In an apology published on Tuesday, Cooper said he “made a judgement error” by publishing Enos’ cartoon on the newspaper’s website Monday morning, just hours after the shooting.

“I am confident that it was not cartoonist Randall Enos’s intent to make light of the tragedy or offend anyone, and it certainly was not ours,” Cooper wrote. “But we did.”

Enos did not immediately respond to a request for comment. Cagle Cartoons, which syndicates Enos’ work, has removed the cartoon from its website.

My colleague, Pulitzer Prize-winning cartoonist Signe Wilkinson, focused her cartoon about the deadly shooting on what she views as the country’s addiction to guns: 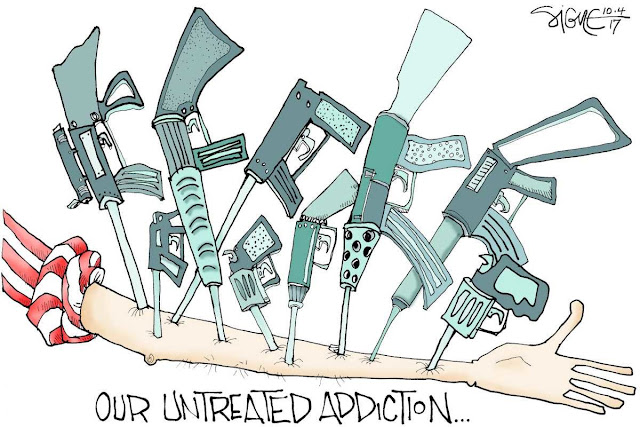