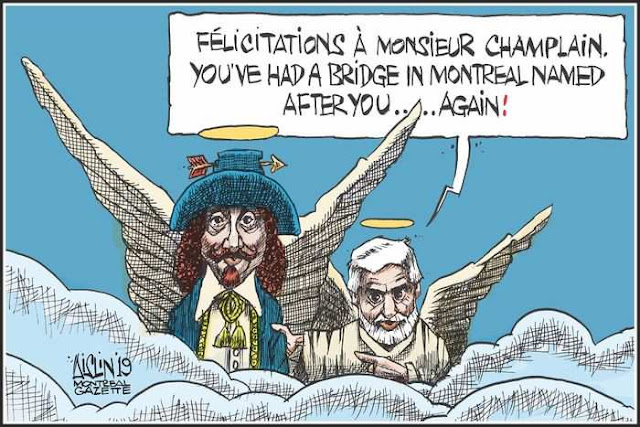 Aislin from The Montreal Gazette as well as Serge Chapleau from La Presse contributed editorial cartoons that will be hidden in the new span of the Champlain Bridge for future generations to find.
What’s going to be funny in 125 years?

More specifically, what’s going to be funny about the new Champlain Bridge in 125 years?

These were the questions that popped into Terry Mosher a.k.a. Aislin’s mind when he got a call from the Canadian government asking whether he and his old comrade Serge Chapleau of La Presse would be interested in contributing a pair of editorial cartoons to a time capsule that will be hidden in the bridge during the opening ceremony.

Among the 22 artifacts in the capsule are a signed hockey puck, an LGBTQ+ rainbow flag, maple syrup, a conductor’s baton signed by Kent Nagano, a BIXI key and a Two Row Wampum Belt donated by the Kahnawake Mohawk people.

“Chapleau and I have developed a reputation as great friends,” Mosher said, noting that they have become representatives of bridging, if you will, the linguistic divide. “People think of it as good news about Montreal, because we’ve known each other for 50 years.”

The two men appear regularly at speaking engagements together, and last fall they took part in a fundraiser for the Lachine Hospital. Mosher was enthusiastic about the idea of shipping laughs to the future with his old buddy, so he called up Chapleau.

“He agreed,” Mosher said. “He didn’t like the idea that they weren’t paying us, but there you go.”

“It’s out of character for us to work for nothing, but I think it tickles us, the idea that 125 years from now somebody is going to open this damn thing and wonder what these things are. I wish I could see that, but it’s not going to happen.”

Which brings us back to the initial question. Mosher and Chapleau are used to turning around cartoons that comment on the daily developments of politics and city life. How did they approach penning jokes for the next century? Turns out, it was just another day at the office.

“It happened pretty fast,” Mosher said. “We’ve been coming up with cartoon ideas for quite a while now. I said, ‘I’m thinking I’ll be dead, and you’ll be dead when they open this thing. Why don’t I do something on Champlain?’ And he said, ‘I’ll do something commenting on the bridge’.”

Both cartoonists appear as angels in their drawings. Mosher’s drawing depicts himself ribbing the French explorer for having yet another bridge named after him. He had drawn Champlain before, and admits to having developed a fondness for him.

“You can’t help but be a fan of Champlain,” Mosher said. “The development of America had some pretty awful characters — LaSalle and a few others — but Champlain, in comparison, seemed a lot more respectful of the Native people. I always liked him, although I did draw him with an arrow through his hat.”

Chapleau’s shows the cartoonist alone, holding a pair of binoculars and pointing downward, saying, “Terry! I think they’ll have to build a third, this one is already backed up!”

La Presse’s ever-impish cartoonist points out that he might have been more comfortable with a devil’s tail than angel’s wings. As such, he was happy to have fun with the obvious and inevitable downside of even the fanciest new bridge.

“I said, there’s no big joke you can make (about a bridge),” Chapleau explained. “I was imagining them opening this in 100 years. The only thing they’ll understand is that the bridge is done for and it’s time to make another. So let’s go for the sad reality — it’s still congested.”

For Chapleau, the whole idea of penning cartoons on actual paper with his old pal Mosher and inserting them into a time capsule was rather amusing.

“I didn’t think they still made capsules that you could put in concrete,” he said. “I recently learned that there’s one in the Jacques-Cartier Bridge from 100 years ago, but they don’t know where it is anymore.”

While it’s all in good fun, both men acknowledge they are honoured by the opportunity to make yet another contribution to our city’s history.

“I’m very happy,” Chapleau said. “These little projects are enjoyable. It’s sweet, and it costs nothing. In my day, they put gangsters in concrete, now it’s a little box with a love note.”

“The fact that they would think of us, amongst all the creative people available,” Mosher said.

“We’ve done some good stuff, apparently. We were pleased, put it that way.
Published by Bado at 12:00 AM