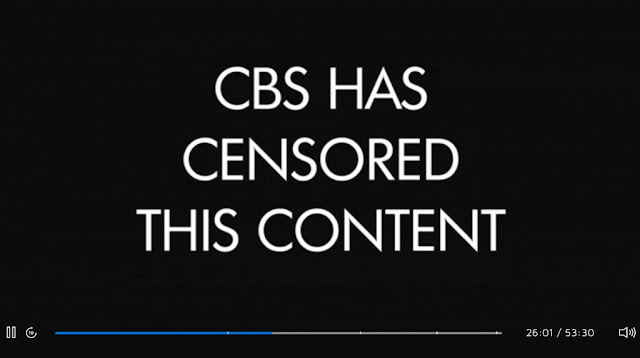 Canadian animator Steve Angel recognizes the irony that his cartoon about censorship was, itself, censored.

The show, which is a spinoff of The Good Wife and airs on the W Network in Canada, centres on a left-leaning Chicago law firm arguing cases about the issues of the day against the political backdrop of Donald Trump's presidency.

The Good Fight is often broken up by Schoolhouse Rock!-style segments, with satirical songs written and performed by American musician Jonathan Coulton.

Angel and his team animate Coulton's music with provocative cartoons, which in the past have included a Nazi-uniformed frog, a reptilian caricature of Hillary Clinton and a scene of the presidential bedroom.

But on a recent episode of the show, a segment criticizing censorship in China was replaced with an eight-second placard reading, "CBS has censored this content."

In a statement, a CBS All Access spokesperson said after raising concerns about the animated short's subject matter, it had reached this "creative solution" with the show's producers.

"I was disappointed, but I understand," Angel said in a phone interview, as a CBS publicist listened on the other end of the line.

"There's the obvious irony of it, but at the same time, I think because it's pretty incendiary material, it wasn't a gigantic surprise."

Angel said he couldn't comment on the content of the segment, but The New Yorker reports the animation alludes to several subjects that have been banned online in China, including Winnie-the-Pooh, as the character was used in memes as a way to poke fun at Chinese President Xi Jinping.

The magazine reports the clip featured the leader dressed as the cartoon bear, shaking his exposed bottom.

While Angel said showrunners Robert and Michelle King have encouraged him not to shy away from provocation, he admitted he felt nervous while drawing the cartoon, given Canada's current tensions with China.

Sino-Canadian diplomatic relations are at a new low after RCMP detained Chinese executive Meng Wanzhou in December at the request of U.S. authorities.

"When you're drawing, you're kind of in your own head, and it's you and a pencil and paper, and it's a very internal world," said Angel.

"Something that goes from kind of an intimate, personal practice to a highly public venture is a big leap, and it has perils."

Angel said he decided to set aside his concerns about the internationally charged content in The Good Fight short because he supports the show's broader mission.

"If everything blows up as a result of this, it's a good way to go down," he said.

Still, Angel said the pulled segment was his favourite of the season, and he hopes it will eventually see the light of day.

"Right now, we're in the middle of this big, hurly-burly moment, and everyone is freaked out together," said Angel.

"Despite the madness of this event, I think it will pass and it will get back to normal, but at the same time, not stop challenging authority and holding up a mirror to power."
Published by Bado at 12:00 AM