From The Calgary Sun. 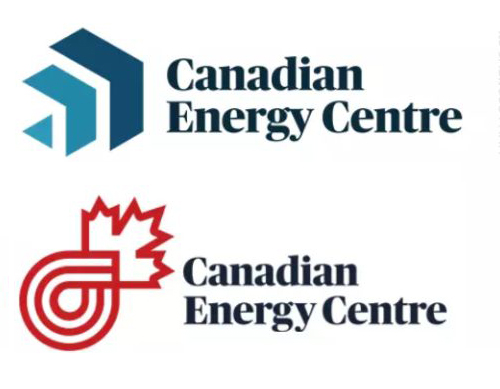 For the second time this month, the Canadian Energy Centre war room’s choice of a corporate logo has run into possible flak.

A California-based software company said Friday it’s considering legal action over the CEC’s use of a logo it deems similar to its own.

That comes a week after the war room pulled its original logo, which was almost identical to the one trademarked by Progress Software, a U.S.-based international applications firm.

The CEC replaced it with another logo, which ATK Technologies Inc. of Pasadena, Calif. claims as its own.

“This is our intellectual property — that logo is similar to ours.”

ATK’s logo, denoting its Alpha Browser app, is a stylized, red-striped letter “a.”

The new CEC logo appears to take that same letter “a” and turn it on its side, with a red maple leaf added to the top right corner.

The man contacted at the ATK office in Pasadena said he wasn’t aware of the CEC’s first logo stumble, adding his company is focusing on its own concerns.

“Our people need to do their analysis; I’m going to get a report next week,” he said.

In response, the CEC issued a statement saying it hasn’t been contacted by the U.S. company.

During the spring provincial election, Alberta Premier Jason Kenney vowed to set up a war room with an annual $30 million budget to challenge what he calls energy industry critics’ inaccuracies, even mobilizing a so-called rapid response team.

Since its official launch Dec. 11, the CEC has been producing online articles trumpeting the merits of the industry.

But so far, the CEC’s missteps have attracted more attention, including a complaint from the Canadian Association of Journalists that the war room’s staff have been misrepresenting themselves as reporters rather than public relations writers.

And the president of the Canadian Culinary Federation, Donald Gyurkovits, angrily said he was never told by a CEC interviewer, who was writing an article on the restaurant sector’s use of natural gas, that she was working for a government agency.

A climate change campaigner who does school presentations said he felt intimidated by being contacted by the government-backed CEC, which took exception to data he used involving the oil and gas industry.

The CEC has yet to find its feet, under some negative publicity, in its effort to promote the image of an industry, said David Taras, professor of communications studies at Mount Royal University.

“They haven’t gotten to first base yet; it’s enough to do a lot of damage to their legitimacy,” said Taras.

The war room, he said, already has a steep challenge convincing the public that this operation — seen by many as producing propaganda “for an industry that has lots of its own machinery” — is a credible use of taxpayer dollars during a time of austerity.

“The whole concept has come under storms of criticism,” said Taras.

But Taras said he doesn’t expect the province to pull the plug or make drastic course changes to the CEC, at least for now.

“Everything about this government says they’ll persevere,” he said. “But the ultimate question is, is this harmful to their credibility, and if it is, they’ll switch it off.”