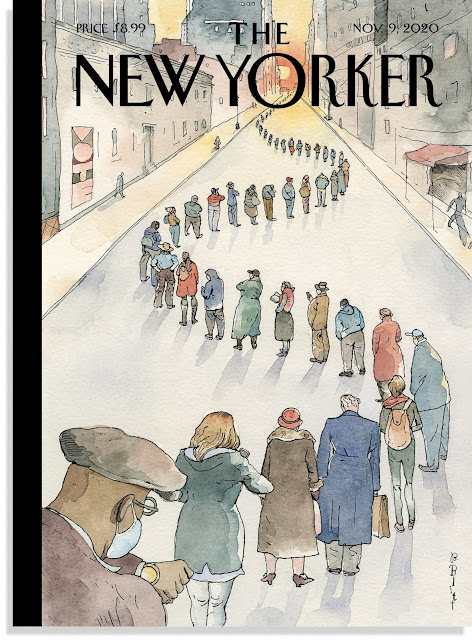 One does not envy the artist assigned to do a cover for a Presidential election. Four years ago, Barry Blitt aced the task, producing an image that, in a polarized country, could resonate with most any American.
In The New Yorker’s latest issue, he pulls a similar trick, nodding only to what we already know: that many people are eager to vote, and that those who didn’t mail their ballots have often been spending hours in line to cast them.
We recently talked to Blitt about how he’s preparing himself for the results.
What are your plans to get through Election Night—or Election Month, as the case may be?

I can tell you that two of the most disappointing Election Nights for me—2000 and 2016—were spent at friends’ election parties. So, even without a pandemic, I’d be spending this one locked in the house. I may even need to spend all of November in my room.

If Donald Trump is voted out of office, do you think that—as a cartoonist—you may end up missing him?

I will not miss him, certainly not as a cartoonist. I’ve drawn him too many times, and spent too much time wringing obvious jokes out of him. I actually found him sort of amusing before he became President, but he ruined our relationship forever by getting into politics.
Do you have political posters or images or artists that you turn to for inspiration?

I do like going through really old political cartoons—by Thomas Rowlandson and George Cruikshank, in particular. Usually, I rifle through their drawings once I’ve worked out an idea, looking for some kind of inspiration about inking and color. So far, they don’t seem to be getting through to me, but I’m still hopeful.
Which President or political figure do you think was the best target for artists and cartoonists?

Oh, every President is a big, fat target. I don’t think Biden has been ripped into enough, owing to the comparative awfulness of his opponent, but if he actually wins he’ll be ripe for attack from many angles. I’d look forward to it.
Published by Bado at 12:58 PM