"A National Insanity: 75 Years of Looking for Nina"

From the Al Hirshfeld Foundation. 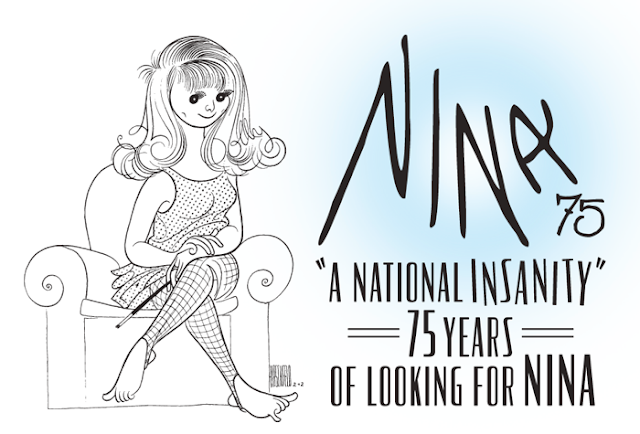 75 years ago, Al Hirshfeld began to hide his daughter’s name, NINA, in the designs of his drawings when she was born in 1945.

According to the artist he put it "in folds of sleeves, tousled hairdos, eyebrows, wrinkles, background, sholaces - anywhere to make it difficult, but not too difficult to find."
Over the next half century Hirshfeld tried to end what he called "a national insanity," but he "learned, the hard way, to put Nina’s name in the drawing before I proudly display my own signature."

Sunday mornings looking for NINAs was a custom shared by New York Times readers, a game played with children and grandchildren.
Finding NINAs was an unspoken initiation into the worlds of Broadway, Off-Broadway, and Hollywood.

For Hirshfeld, drawing NINAs became second nature, and they appeared spontaneously as he worked, forcing him to count them at the end like everyone else.

At a reader’s suggestion in 1960, he began to put a number next to his signature when there weere more than one NINA to hunt for.

We wish you happy hunting for NINAs in these works.