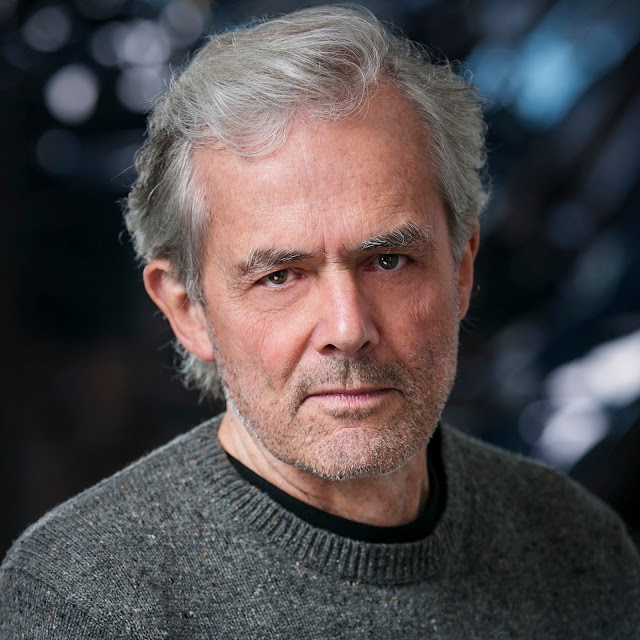 It is with great shock and sadness that I learned of the passing last night, at St. Michael’s hospital in Toronto, of Alan King, former editorial cartoonist at The Ottawa Citizen.
Born in 1947 in Belfast, Ireland, he immigrated, at the age of 2, with his family to Canada. He studied classical music as a child and at university.
He graduated in English from the University of Western Ontario,  taught high school English, worked at various jobs including illustration and art director at an ad agency. 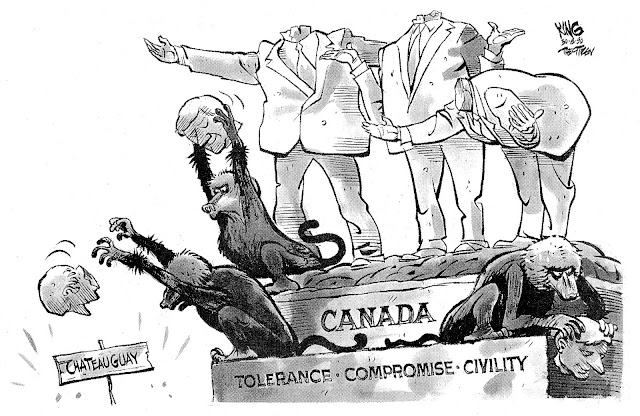 In 1979 he joined the Citizen and worked as regular art critic, wrote book reviews and became its' full-time editorial cartoonist when Rusins Kaufmanis retired. 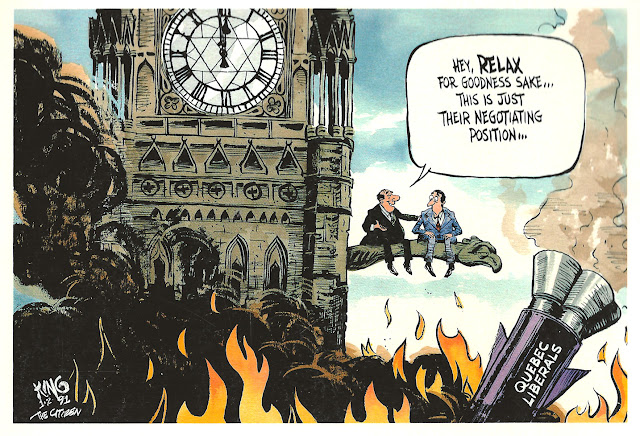 He left the Citizen in 1997, after the paper was bought by Conrad Black and took a conservative turn.
He was both an illustrator, a graphic as well as a fine artist. 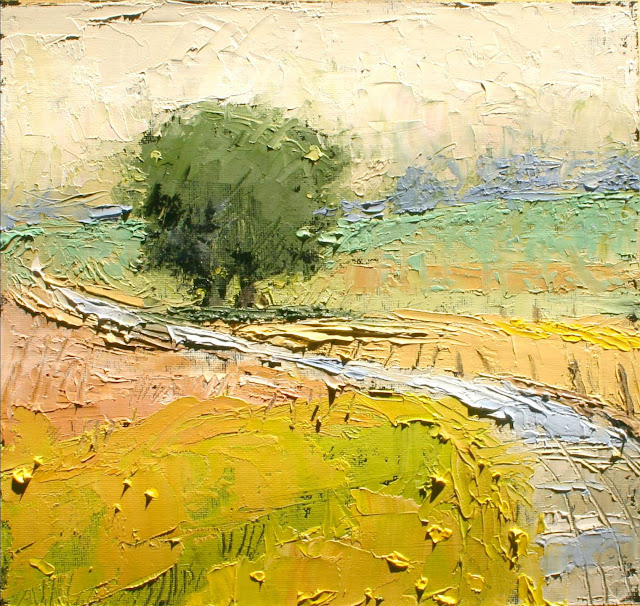 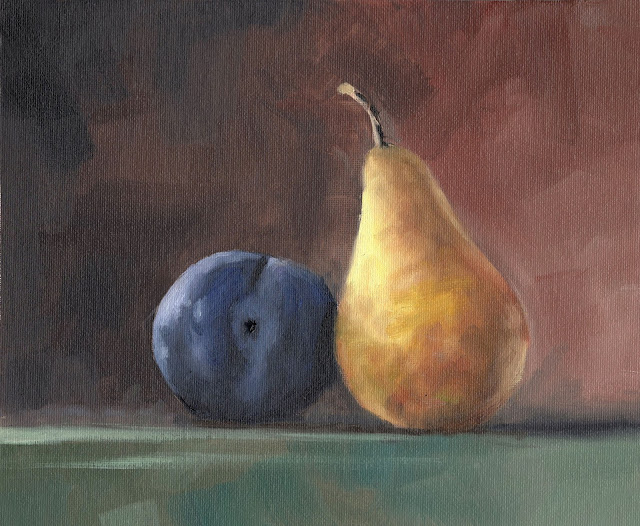 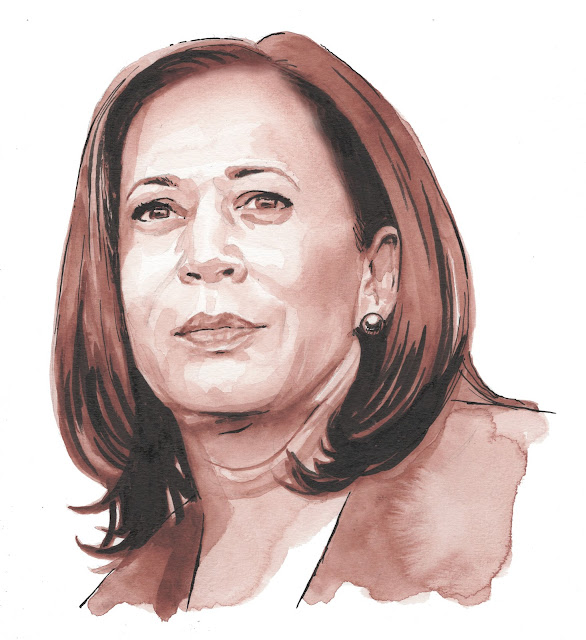 UPDATE
It is with great sadness that the King family announces the peaceful passing of Alan King on February 8, 2021, at St. Michael's Hospital in Toronto.
Alan was born in Belfast, Northern Ireland and emigrated with his parents Alfred and Maureen King in 1948 eventually settling in Whitby, Ontario.
Predeceased by his brother and sister-in-law, Paul and Susan (Foster) King, and lovingly remembered by his two children, Christopher (Jessica) and Chloe (Romain), and sisters Gayle (Gary) Dudeck and Elaine Bird.
Alan studied classical piano, organ and English at Western University.
An extraordinary, self-taught artist, Alan first worked in advertising and publishing, with some of his early illustrations appearing in the Toronto Star, Maclean's, Time magazine and Readers Digest.
Alan joined the Ottawa Citizen in 1979, where he worked as editorial cartoonist for 17 years.
He was known for his sharp wit and smart satirical commentary (later donating over 700 political cartoons to the National Archives).
He also contributed arts and book reviews.
After leaving the newspaper business, Alan had a successful career as a commercial illustrator, his work represented by a U.S.-based agent. 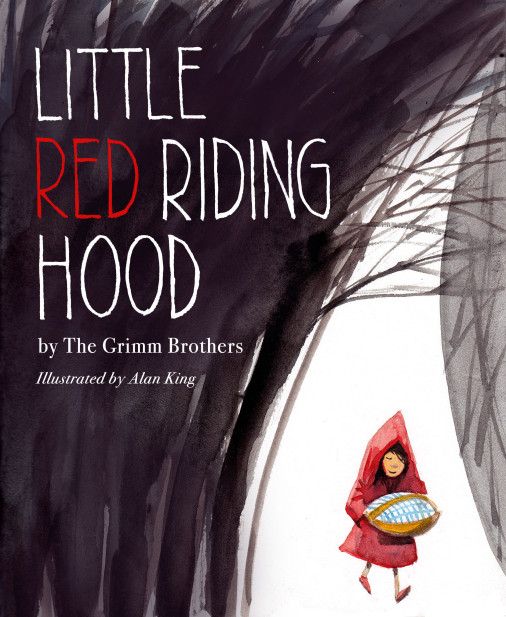 He designed coins for the Royal Canadian Mint and illustrated stamps for Canada Post.
When he returned to Toronto in 2013, he transitioned into web design and digital illustration, while teaching watercolour and digital art at George Brown College.
Alan was a member of the Arts and Letters Club in Toronto, where he will be remembered for his stimulating conversations and infectious laughter.
His prolific output transcended convention and categorization and included oil portraits - one of his greatest passions, along with music.
His paintings included such notables as William Aide (Musician/Artist), Andrew Absil (Anglican Bishop), Leonard Lee (Founder of Lee Valley), and Elizabeth Kilbourne (Anglican Priest).
Alan died after unexpected complications following heart surgery, despite every effort by staff at St. Mike's to save him.
The family is especially grateful to the doctors and nurses in the cardiovascular ICU, as well as for all the friends who sent their tributes and words of kindness.
Due to the restrictions surrounding COVID-19 a funeral will not be held at this time. A virtual ceremony is planned for a later date.
The Ottawa Citizen’s longtime editorial cartoonist Alan King once described his craft as the “scruffy offspring of art and journalism.”

King was a master of that unruly child, both entertaining and maddening readers during his 17 years as lead cartoonist.
His richly illustrated ink drawings regularly skewered politicians, pomposity and hypocrisy.

“Editorial cartoons,” he once wrote, “speak louder, more sharply, and with less forethought than most forms of newspaper commentary: It is their glaring defect and great advantage.”
A classically trained pianist and self-taught artist, King went on to a career as an illustrator, graphic designer and art teacher after leaving the Citizen in 1998.
He died earlier this month from unexpected complications following heart surgery.

“He was very passionate about many things, and excelled at all of them,” said his sister, Gayle Dudeck.
Former Citizen art critic Nancy Baele remembered King as a suave and urbane colleague: “He was just so bright and so funny, you couldn’t help but enjoy his company,” she said.

Born Sept. 16, 1947 in Belfast, Alan King came to Canada with his family when he was two. The family settled in Whitby, Ont., where his father, Alfred, an RAF veteran, worked for the Frigidaire company.

Alan took an early interest in music and joined St. John’s Anglican Church so he could play its organ.
The minister allowed him to practice every day after school. He was mostly self-taught since his family couldn’t afford music lessons, much less a piano, until he was 13.

His parents were so impressed with their son that they had his IQ tested: He scored 143 – a level associated with genius – and skipped a grade.
They also allowed him to paint a giant seascape on their living room wall. “It was a huge oil painting: People would stop on the sidewalk to look in the window,” said Dudeck.

When his parents installed a piano in the kitchen, Alan practised relentlessly. His siblings often begged him to stop so they could watch TV in the nearby living room. “He just played non-stop,” remembered his sister, Elaine Bird.

At the University of Western Ontario, King studied piano, organ and English, but decided a career in classical music was not for him.
So he turned his attention to drawing, something he had done compulsively all his life. “Trying my luck as an artist was a longshot but I thought I’d give it a go,” he said.
King read how-to books, and practised drawing and painting every day.
Overcoming self-doubt, he launched a career as a freelance artist before landing a job as an illustrator, art critic and book reviewer at the Citizen in 1979.

Montreal Gazette editorial cartoonist Terry Mosher, known as Aislin to his legion of readers, called King a skilled and thoughtful cartoonist.
“They were instantly readable,” Mosher said of King’s cartoons. “He had a strong visual sense and he got right to the point: You have to do that in cartooning.”

“He was just an amazing draftsman,” said former Globe and Mail writer and cartoonist Warren Clements.
“He was very authoritative with his lines: He knew exactly what effect to go for and how to achieve it. It was delightful, his work.”

Early in his career at the Citizen, King also played a starring role in one of the paper’s most infamous promotions.
In 1981, the paper launched what it called The Gold Rush: It hid $5,000 worth of gold in the city and invited readers to find it. King published daily illustrations that gave readers clues as to its location.
They proved confounding.
Some treasure hunters tried to tunnel into the Innes Road detention centre; others dug up the boardwalk on Dow’s Lake. Gatineau police stopped a man searching the station basement for gold; others were discovered pulling insulation out of air conditioners at Ottawa police headquarters.
Fights broke out between competing gold seekers.

The police demanded an end to the mayhem, and King was ordered to make his cartoon clues more obvious. Days later, the gold was finally discovered in a tree beside a ski trail.

King’s newspaper career ended in 1998 following a clash with managers installed by the Citizen’s then owner, Conrad Black, whom King had featured in an unflattering cartoon soon after the media baron bought what used to be the Southam Newspaper chain.
The cartoon depicted an enormous Black devouring Southam papers with a thought bubble that read, “I can’t believe I ate the whole thing.”

King did not share the right-wing views of the paper’s new proprietor, and he frequently butted heads with editor Neil Reynolds who had to approve King’s cartoons before they were published.

The relationship fractured for good when Reynolds spiked a cartoon that King had drawn, mocking Hockey Night in Canada’s Don Cherry. Reynolds called it “nasty.”
King refused to draw another cartoon for the next day’s paper, a move Reynolds regarded as insubordinate.

When Reynolds demoted him to illustrator, King quit the paper and warned other cartoonists to be wary.
“Attempts at rational debate are regarded as mutinous insolence,” King wrote, “and deviations from the ideological line of the editorial board as evidence of mental deficiency.”
He donated 700 of his cartoons to Library and Archives Canada.

After the Citizen, King reinvented himself as a commercial illustrator, designing coins for the Royal Canadian Mint and stamps for Canada Post.
In 2013, he moved to Toronto and embraced new challenges in web design and digital art.
He taught art classes at George Brown College and was an active member of the Arts and Letters Club of Toronto.

He cycled everywhere, and it was while on a 40-kilometre bike ride that he first noticed the shortness of breath that would eventually lead to his heart bypass surgery.

Twice married, he is survived by his two sisters and two children, Christopher and Chloe.
Published by Bado at 12:19 PM