The 49th edition of the Angoulême International Comic Art Festival honoured Canadian artist Julie Doucet with its highest award, the Grand Prix.
A career recognition award, Doucet becomes the third woman in the history of the festival to receive the prize – the last being Rumiko Takahashi in 2019.
Doucet won the favour of an electorate of 1,820 comic book authors and professionals, beating French cartoonists Catherine Meurisse and Pénélope Bagieu.
At a French festival which has previously tended to favour their own creators on the ballot, this win comes as a great surprise.
In a press release the Festival said,

“In the footsteps of Chris Ware in 2021 and of Emmanuel Guibert the year before that, the Canadian artist Julie Doucet has been awarded the Grand Prix of the 49th Angoulême International Comics Festival following a vote that involved 1,820 fellow comic book authors.

Twenty-two years have passed since Julie Doucet last produced a comic strip! Some of the artists who voted this year were not yet born when she published the last volume of her Dirty Plotte series in 1999. Similarly, Calvin and Hobbes author Bill Watterson won the Festival’s Grand Prix in 2014, 19 years after writing his last comic.

This goes to show that the comics world has memory, and above all, that Julie Doucet’s work – which has greatly influenced comic artists from the world over – never ceases to renew itself!

L’Association’s publication, in 2021, of the profuse anthology Maxiplotte (part of the Festival’s Heritage Selection this year) revealed Julie Doucet’s subversive and radical work to those who had not yet heard about her.

The Canadian author was a pioneer of the autobiographical comics genre; between 1987 and 1999, she published fanzines and comics (notably the 12 issues of the mythical Dirty Plotte) to recount her daily life, as well as her dreams and nightmares.

With her extraordinary linework, grungy yet superbly elegant in her oh-so personal and brashly free style, she has produced a radically feminist body of work that tackles themes seldom addressed, especially in such a direct manner: the body, menstruation, sexual fantasies, gender issues, and more.

The Festival is honoured to welcome such a great author this year. And although she hasn’t published new work for a while now, rumour has it she isn’t quite done with the comics realm yet!”

Maxiplotte, a complete collection of Doucet’s Dirty Plotte comics, was released in France late last year from L’Association and is up for an award in this year’s Heritage Selection (Sélection Patrimoine) at the festival.
The English edition – titled Dirty Plotte: The Complete Julie Doucet – was published in 2019 by Drawn & Quarterly, original publishers of the serialised editions of the work. 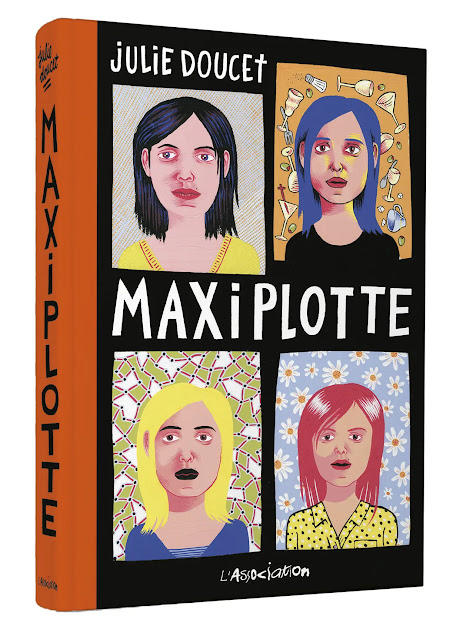 Next month Doucet returns to comics with Time Zone J, also from Drawn & Quarterly, her first new comics work since her extended hiatus began in the 1990s.

Doucet had previously stopped producing new comics work due to the oppression of working and functioning in a male-dominated space and had moved on to other pursuits.
Recent reprintings have brought her work back into popular attention and – particularly – of new readers and potential fans. The award of the Grand Prix is a massive endorsement of her prior work and contribution to the sequential art form.

As well as the deserved recognition, usually the Grand Prix winner will receive a special exhibition of their work at the following year’s festival.
Last year’s winner, Chris Ware, currently has a fascinating exhibition of his work on display this weekend.
Published by Bado at 6:41 PM