Riber Hansson is a freelance editorial cartoonist and illustrator for Swedish daily newspapers. His work also appears in several newspapers all over the world. His work has been exhibited in the National Museum of Art in Stockholm, the Swedish Library of Parliament, the Newseum (Washington, DC), the International Museum of Cartoon Art (Boca Raton, Florida), the Museo della Satira e della Caricatura (Forte dei Marmi, Italy) as well as the Musée d'histoire contemporaine in Paris.

He has illustrated several textbooks and published three books of his own political cartoons.
In 2007 he won the Grand Prize at the World Press Cartoon, held in Sintra, Portugal with a picture of Putin, and in 2012, third prize, with a caricature of Berlusconi.


Since when do you draw?

I started to draw cartoons late in life. Before my art career I was as a technician specializing in drawing perspective for architects and construction companies. (This was before the computer) In a recession in the building industry I had to find a new job and a newspaper offered me one. Against my will I was suddenly involved in what later became my dream profession. My career as a cartoonist started in 1990 when I get employed at one of the leading Swedish newspaper Svenska Dagbladet in Stockholm. The cartoons were only one part of the job; it also included ordinary illustrations and travelling reports. I even wrote articles illustrating them with my own drawings.

Basically it was simply because I like to draw. And then I found it was a stimulating challenge for my creativity to draw cartoons. As a bonus I got a more complex and interesting view of the world, because I had to read more about the political, human and religious conflicts.
Shortly after I started my cartoonist career I met the great artist Sokol, during a cartoon festival in Rathdrum in Ireland. He was the special invited guest, who had a lecture showing some of his drawings. I had never met or heard of Sokol before, but I immediately was very, very impressed.

One thing he repeated saying was: “I never try to entertain!“ He meant his only goal was to hit the point, that‘s enough. It wasn’t necessary to have any intention to amuse or be satirical. If you hit the point, such qualities might appear in the mind of the reader when interpreting the cartoon. I adopted and made Sokol’sthoughts as mine, because I felt they confirmed my attitude on editorial cartoons.

Since that moment I’ve been working the same way – more or less, of course – at least I have the same approach, without using his words as a jail. I hope of course also that the cartoons makes people think, and make them less angry, by finding them hitting the head of the nail and maybe giving them a surprising angle on small and big problems.

What studies have you done?

I’ve learned art the hard and long way, making all the mistakes myself. I studied the drawings of the great masters, looking in books at works by Rembrandt, Picasso, Dürer, Hokusai and hundred of other artists.

Later I bought all the books I could find containing old illustration masters, like Daniel Vierge, Joseph Clement Coll and a long list of other names.

After that I started to look for caricatures and cartoons. The most important influence for my drawing technique comes from David Levine.

For modelling the ideas, the Swedish master cartoonist EWK has been very important. I exercised my drawing technique in thousands of hours of sketching. Later I started to paint using the same method.

I decided to be as good as my late discovered talent allowed me to be, so I stopped smoking and drinking and started even to exercise physically.

What social and human aspects of the country appear in your drawings?

As a citizen I think it is difficult to get a clear view of how and which ones of your own countries local aspects influences you. But I think I can guess of a couple:

Sweden is known as a country that takes environmental issues and sustainability seriously, which I also do personally.

This subject appears naturally in my cartoons, as in other Swedish cartoonists. It has also lead to a good result. After the Summit in Copenhagen 2009, a group of five Swedish cartoonists were invited by the Swedish Institute to, in collaboration with Swedish embassies around the world, show our cartoons in a travelling exhibition called Facing the Climate. This collaborations has until today resulted in 150 articles related to the Facing the Climate collaborations. The estimated number of readers is more than 4 million! 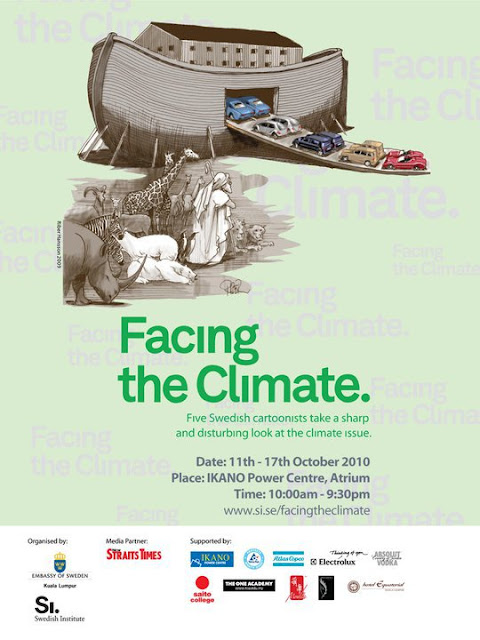 I also choose to belong to conscious Swedish cartoonists who do not draw stereotypical images that objectify women, images that were previously common even in Sweden, and still can often be found outside Sweden. My attitude has nothing to do with morality, sexuality or nudity. It is simply a rejection of the stereotype claiming that a cartoon is humorous when obviously the only point in the drawing is that it degrades a woman.

The Swedish women's movement and the feminism had affected me in this matter. And of course it should. As a satirical artist I should have my ears open to new voices that tells about inequality.

Why do you draws international characters and political themes in your cartoons?

Generally it is more interesting to draw cartoons about powerful people, which usually are same as the leaders of the superpowers, Obama, Putin and Xi Jinping but also other people who are dangerous like Ahmadinejad and Kim Jong Un and even terrorist leaders like Bin Laden used to be.

All people with strong colour or personality – good or bad - are good targets for a cartoonist. One reason for this is also that those people are well known for the readers, or other who looks at the cartoon. This is especially important when it comes to cartoons like mine without captions.

The same is applicable for the themes in the cartoons. Generally you have to draw things the readers of the paper knows about or can understand very fast. I use to say that as a cartoonist you have two to five seconds to catch the interest of the busy reader.


Why is humor and satire important to society?

As I mentioned before, I don’t try to entertain in my cartoons, I’m just happy if people react at all. But in spite of that I think humour is a good thing in a cartoon, because if you laugh at the powerful and dangerous people you are in some way disarming them. That’s why despotic leaders and fundamentalists hate caricatures and cartons showing them in funny situations.


How is your working day?

Today I’m retired and work as a freelancing cartoonist and I have only one agreement with a newspaper for one cartoon a week. If my cartoon is dealing with international stuff I’ll send it to Cagle Cartoons Syndicate, and also to Cartooning for Peace. Not so much work, which means I have time to read, paint and write what I like.

But actually, in recent times, I receive more invitations for exhibitions than before, both in Sweden and in other parts of Europe, so sometimes I find I’m a little busy anyhow.


How do you apply the line and color your cartoons?  Do you draw by hand or on the computer?

Today I sketch, draw and paint most cartoons in the computer.
When I’m in my studio at home I’m using a Citiq 24 HD. When I’m travelling or stay in my country house I’m using a ordinary Wacom pad.
Sometimes, but not very often I go back to pen and ink or aquarelle just for fun.


Does the Swedish press give prominence to humour?

Yes I think so, but unfortunately (for me) not so much to the traditional political satire that I’m representing. Today the prominence is given to a new generation of artists who usually like to draw comic strips in combination with satirical text.

Many – I think most of them – are young women which have been very successful at using sharp and personal satire.

Where are your cartoons being published now?