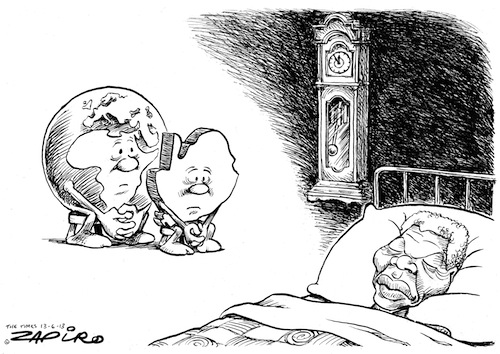 “Mandela had good and bad days,” says Zapiro of a meeting with the former president at the end of 2008. “Days when he had no humour, no memory.”

Zapiro, real name Jonathan Shapiro, has produced several cartoons depicting the evolving situation with Mandela’s health, some of which have caused controversy.

He says he was accused of “putting words in [Mandela's] mouth” by one newspaper editor when he drew a speech bubble emanating from the former president's lips that said, “I know it’s hard, but we have to start letting go”. 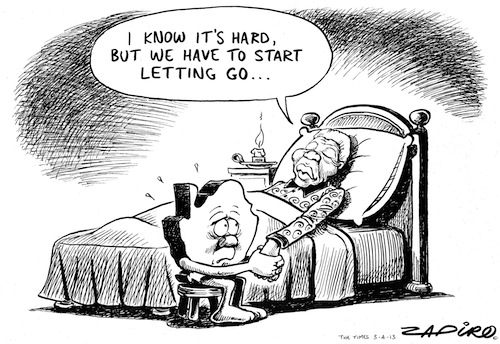 Mandela is currently receiving treatment for a recurrent lung infection. It is his third stay in hospital this year.

The cartoon, drawn during Mandela’s hospitalisation in April, was changed to remove the text. However, a staff member at the Times newspaper published the original online by mistake. It went viral, according to Zapiro, garnering more than 40,000 hits in the first few hours.

Many of the comments about the cartoon were positive, Zapiro says, although some people did not like it.

“Many young people across the board wanted to talk about the issues, including death,” he says. “There's sometimes a racial split. Part of the black community doesn’t want issues to be talked about in the open, especially when it comes to death.”

Mandela's grandson, Mandla, said on Tuesday that it is “unacceptable to hear about someone’s passing while they’re still alive”.

Also published in April was Zapiro's take on the board game Scrabble, instead titled “Squabble, the Mandela family game”. It depicts Mandela lying down with Scrabble letters spelling out “Greed”, “Defiles”, “Icon” and “Legacy”. Characters atop the fictitious board game appear to argue. 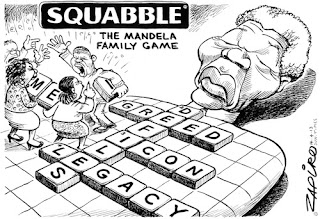 “Mandela is badly used by the ANC [African National Congress] hierarchy,” says Cape Town-born Zapiro. “And the greed of his children - it’s tacky and wrong.”

In April Mandela’s daughters Makaziwe and Zenani filed a petition against Mandela trustees who manage some of his royalties. One of the directors of the company, George Bizos, is often considered one of Mandela’s best friends.

More recently Zapiro’s portrayal of Mandela as South Africa itself on a drawing of a map attracted criticism because people thought it looked as if he was drowning.

The award-winning cartoonist says that there are multiple interpretations. “Something of SA [South Africa] will go when he goes. Because Mandela and his generation of comrades were the architects of democracy and they represented values that the ANC is now losing,” he says.

On Fathers’ Day, Zapiro’s representation of Mandela in bed reading a card, “Father of the nation”, received more positive praise. 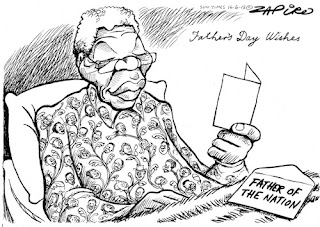 “It’s funny because it’s now focusing on Mandela as your grandfather, a warm and cuddly figure. But in the 90s he was a freedom fighter [in Zapiro’s cartoons]. He took the ANC during the struggle beyond peaceful resistance,” the cartoonist says.

Zapiro himself was an activist. His biography says he refused to bear arms after being conscripted into the army. He joined the United Democratic Front anti-apartheid organisation in 1983 and was subsequently arrested under the Illegal Gatherings Act.

As many media groups prepare their Mandela obituaries, Zapiro says he has not felt the “urge” to pre-produce his artistic homage to the first president of a democratic South Africa.