… with Ken Rockburn on CPAC. 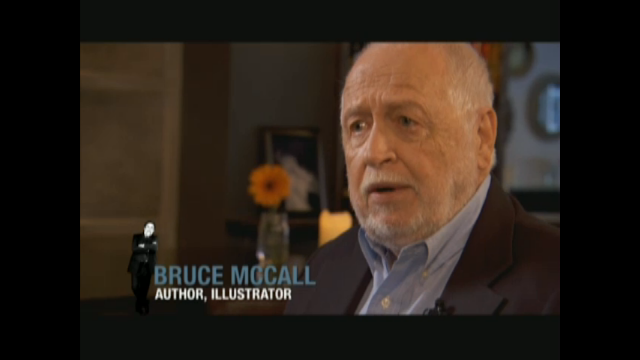 Author, illustrator and cartoonist Bruce McCall has lived in New York for the past 40 years but he grew up in the quiet, peaceful idyllic town of Simcoe, Ontario. Never a strong performer in school, Mr. McCall displayed, from a very young age, a talent for drawing and writing.

It was his writing that gave him his first big break, working as an copywriter in the advertising department of General Motors at their headquarters in Detroit. During the early 1970's, Mr. McCall hooked up with the brash, irreverent, satirical humour magazine National Lampoon and for Mr. McCall it was his "single greatest psychic updraft of his life."

With renewed confidence, Mr. McCall decided to submit some of his work to The New Yorker, and to his great surprise they loved it. After fifteen years as a writer, Mr. McCall was asked by then editor Tina Brown if he wanted to paint a cover of the iconic magazine. He has since painted over fifty covers. The high school drop-out from Simcoe continues to paint and write for The New Yorker magazine. 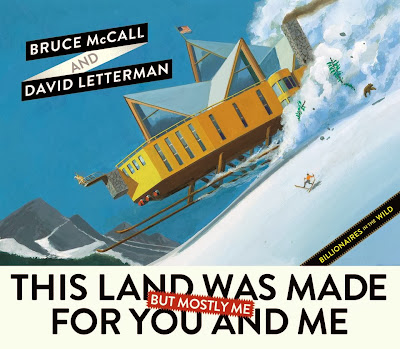 Excerpts from an article by Frazier Moore for AP

Dave Letterman teamed up with Bruce McCall for their new book, “This Land Was Made for You and Me (But Mostly Me)” with the sassy subtitle “Billionaires in the Wild” (Blue Rider Press).

Their book treats readers to the McCallian charm that Letterman has adored since the 1970s, when he stumbled onto McCall’s work in National Lampoon and Esquire magazines, then became a fan of McCall’s text-and-illustration classics including “Zany Afternoons” and “All Meat Looks Like South America,” as well as his 50-and-counting covers for The New Yorker.

McCall, now 78, depicts a wonderland of gracious living writ extravagantly large. His is a Gatsby-like world of urbane but unconscionable excess that feels fancifully authentic, that indeed might have existed in bygone times, or might today, or might tomorrow — that is, if expense, taste and even minimal respect for Mother Nature were no object.

The new book stemmed from Letterman’s off-hours whiled away at his Montana ranch, where, around him, he saw fortunes and hauteur fuel outrageous back-to-nature lifestyles.

“I kept thinking, I would just like to see one Bruce McCall rendering of a million-acre ranch,” Letterman recalls.

“This Land” goes even further. Broadening its scope beyond just Montana’s “billionaires in the wild,” it goes global with dozens of imagined case histories, like the 23-year-old casino titan who buys an island in the Fijis, where he installs a nuclear power plant to furnish hot water to his Olympic-size Jacuzzi, and a “Bangalorean packaged-suttee mogul” who removes the craggy peak of Mount Everest and transports it to the roof of his ritzy Manhattan apartment house, with his valet posted at the summit to serve martinis to parched mountain-climbing guests.