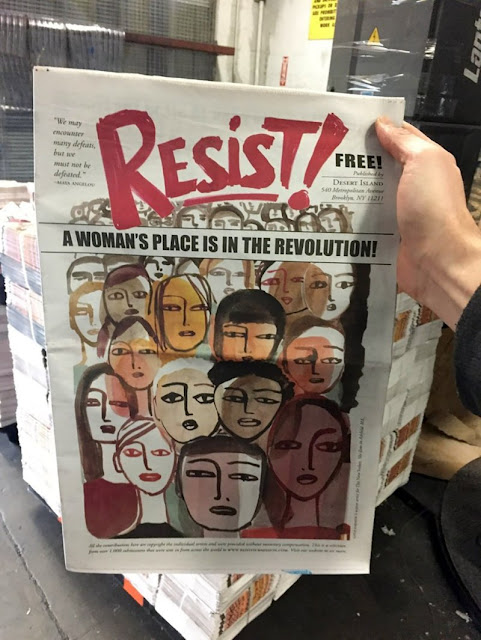 The comic RESIST! is a reaffirmation of the liberal principles—free speech, a free press, racial and gender equality—that its creators see as threatened by a Trump presidency.

Uteruses and ovaries. Penis rainstorms. A revolver barrel plugged with a tampon. A declaration that “a woman's place is in the revolution!”

These are some of the images that decorate RESIST!, a 40-page tabloid newspaper of comics and cartoons by mostly women artists to be distributed in cities around the country on Inauguration Day and the following day in the nation’s capital, during the Women’s March on Washington.

The idea for a tabloid stuffed with polemical comics responding to Donald Trump’s election was conceived by Gabe Fowler, a Brooklyn-based bookstore owner who publishes the quarterly comics anthology Smoke Signal.

Funded initially by a grant from Fowler and, after the project's launch, a separate grant from Democratic fundraiser Mitch Berger, RESIST! has since covered its costs with thousands of individual donations—and a print run of 20,000 copies has ballooned to 60,000.

A week after the election, Fowler recruited Françoise Mouly, who has been art director of The New Yorker since 1993, and who in turn signed up her daughter, 29-year-old writer Nadja Spiegelman. (The two had previously worked together on Blown Covers, a book and blog of mock New Yorker covers).

When the idea for RESIST! was fully formed, Spiegelman launched a website calling for submissions. Within days they received more than 1,000 from artists around the country.

Mouly is a legend in the world of comics: She edited the hugely influential magazine RAW with her husband Art Spiegelman, the Pulitzer-winning cartoonist behind Maus, the first graphic novel to be awarded the prize (first serialized in RAW), and was awarded both the Knight of the Order of Arts and Letters and Knight of the Legion of Honour by the French government.

“I have spent my whole life making a case for comics and images to be taken seriously,” said Mouly, who laments the decline of the newspaper and, with it, the almost total dissolution of the radical underground press (“I grew up with Charlie Hebdo”).

In the 1960s and ’70s, both in France and in the United States, the homebrewed left-wing press profoundly influenced debate and acted as a training ground for many of today’s mainstream journalists.


Printed in tabloid format, Mouly says RESIST! is, in part, a deliberate call-out to these mostly forgotten, radical forebearers. But it’s also a reaffirmation of the liberal principles—free speech, a free press, racial and gender equality—that they see as threatened by a Trump presidency.

“Trump did not win in spite of the fact that his campaign was stridently isolationist, racist, xenophobic, and sexist, but because he had the courage to advocate a tribal allegiance, where people feel connected by the idea of excluding Mexicans and Muslims,” said Mouly.

One of the goals of RESIST!, then, was to be as inclusive as possible. So while the first 34 pages are comics by women artists—including the cover by illustrator Gayle Kabaker—the last eight pages, a section called “The Man Cave,” are from male artists.

There’s also a page dedicated to the work of gender nonconforming artists. (Comics that didn’t make it into the print version will be posted to RESIST!’s website.)

RESIST!’s mission calls for inclusion, but Spiegelman also noted the importance of “separating submissions from women versus men, the collective women’s voice, and all of its different tonalities.”

The gender separation, Mouly argued, is important because RESIST! provides a platform where women can speak “without fear of being censored or judged for what they’re saying... Here there is the cloak and comfort of many women speaking together.”


While Trump himself makes a few appearances in the “Manscape” section, the president-elect is largely absent from the pages of RESIST! “We’re trying to define what we stand for rather than what we stand against,” said Spiegelman.

Mouly and Spiegelman are sanguine but realistic about RESIST!’s ability to persuade Trump’s 60 million supporters. It is, after all, a project created by progressives, for progressives.