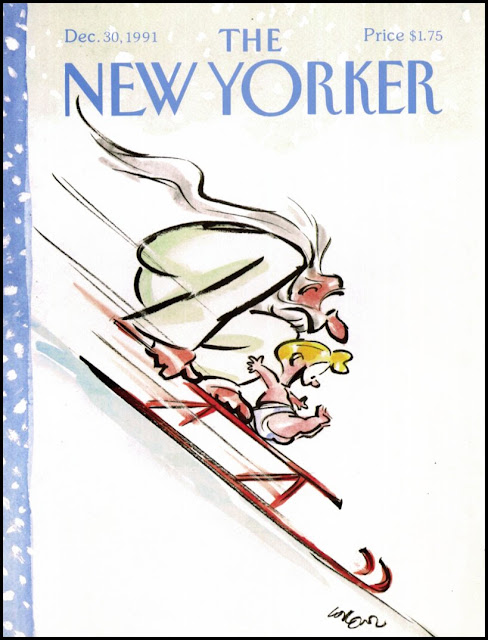 Here are excerpts from an interview conducted by Richard Gehr in The Comics Journal:

Your first cartoon in The Complete Cartoons of the New Yorker shows a American soldier writing “Yankee go home” on a wall in Europe. 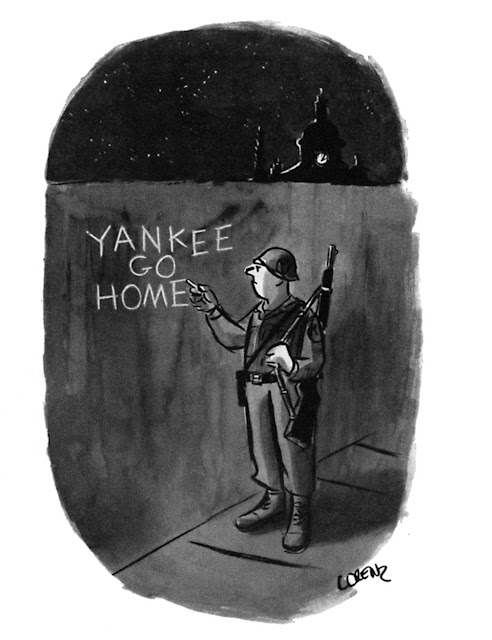 Is that in there? I thought I did that for Sports Illustrated. No, that wasn’t my first New Yorker cartoon. My first was a nondescript drawing, some gorgeous airhead talking to a sugar daddy. I don’t even remember the caption. They were very indulgent.

Your brush work looks quite distinctive among other New Yorker cartoonists these days.

All of the younger artists draw with a more tentative pen line. When I started, the tradition was still nineteenth century. Those guys could all draw, but that’s no longer the case. Nobody comes out of that tradition anymore; it’s not what they recognize as cartooning. It seems old hat, which is too bad. Some really wonderful draftsmen were working in those days. Mischa Richter would get his OK’s from Geraghty the day they had the art meeting. If he had one or two, he would sit down and do the finishes right there in the office. Then he’d get on an airplane back to Cape Cod.

Didn’t that make you hate him a little?

It was more envy than hate. There was a little work area if you had to fix a drawing or whatever. He was a remarkably skilled draftsman and a very interesting guy. His family was White Russian and fled during the revolution. He came from a very cultured background. He was widely read and very knowledgeable about music. And very generous. One thing that struck me when I started working in this field is how generous cartoonists are to one another.

And yet cartooning is an increasingly competitive field.

It’s a very competitive field. The New Yorker is only going to publish so many cartoons, so what you’re selling has a direct effect on what somebody else is trying to sell. And yet I can’t think of a single cartoonist who wasn’t generous toward the others. It’s very collegial, which is rare in the arts.

Perhaps it has something to do with The New Yorker‘s weekly schedule and regular Tuesday drop-offs.

There’s that. But I wasn’t thinking only about The New Yorker, because in those days The New Yorker was only part of the marketplace. You went out to all these other magazines, so you’d see everybody. I remember the first time I met Mischa. I was going to True magazine, where they were repainting their offices. And there was Mischa Richter, one of the great figures in cartooning, sitting out in the hallway on this rolled-up rug, waiting for his opportunity to go in and see the cartoon editor!
Published by Bado at 4:00 AM