An open letter to the Overseas Press Club from the AAEC 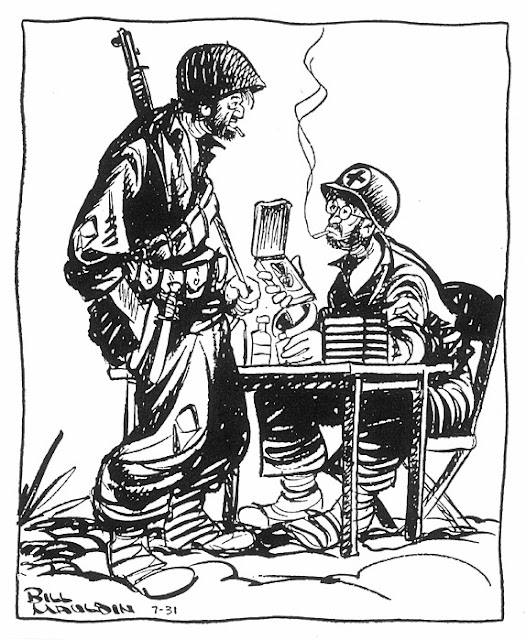 It's no secret cartoonists were disappointed when the  Overseas Press Club dropped the name of Thomas Nast from their cartooning award.
Now the Association of American Editorial Cartoonists President Kevin Necessary is asking the OPCA to rename the contest after 20th century great Bill Mauldin.

On behalf of the Association of American Editorial Cartoonists, I want to thank the Overseas Press Club for its continued support of editorial cartooning through The Best Cartoon Award. Recognition of cartoonists and their work from organizations such as the OPCA not only bolsters the individual award winners, but further shows how important editorial cartooning is to the public and to journalism at large.

I write to you today to advocate for a change to the cartoon category.

The current OCPA award is now virtually the only category not to be named after a legacy journalist. The AAEC acknowledges the reason why the previous name was dropped in 2018 and considers that a settled matter. Instead, we would like to encourage you and the OPCA Board to consider another historical figure, one who exemplified the best of both editorial cartooning and reporting in the field.

To that end, I would urge the Overseas Press Club to name the cartooning award after Bill Mauldin.

Mauldin’s best known work are the cartoons he drew while serving in the United States Army in Europe during World War II. Frequently featuring two soldiers, Willie and Joe, the cartoons gave a voice to the regular GIs fighting overseas and provided a glimpse of life on the front lines to those back home — and won Mauldin his first Pulitzer Prize in 1945.

He was awarded a second Pulitzer in 1959 for a cartoon about the imprisonment of a Russian author in a Soviet gulag. And Mauldin’s 1963 cartoon in the wake of President Kennedy’s assassination, featuring the statue of Abraham Lincoln with his head buried in his hands, became a national symbol of mourning.

Mauldin exemplified the very best of what editorial cartooning — and journalism — can be. His work held a mirror to the injustices, challenges and politics of his time, told from the perspective of the common person. He provided a voice for those who may not have otherwise been heard.

As shown in the recent documentary “If It’s Big, Hit It,” Mauldin’s life and legacy have remained a benchmark of what makes editorial cartooning so important to journalism and American public discourse.

As we approach the 20th anniversary of Bill Mauldin’s 2003 passing, I ask that the OPCA Board consider honoring this great cartoonist’s legacy by renaming The Best Cartoon Award to The Bill Mauldin Award.

Thank you for your time and for your continuing support of editorial cartooning.