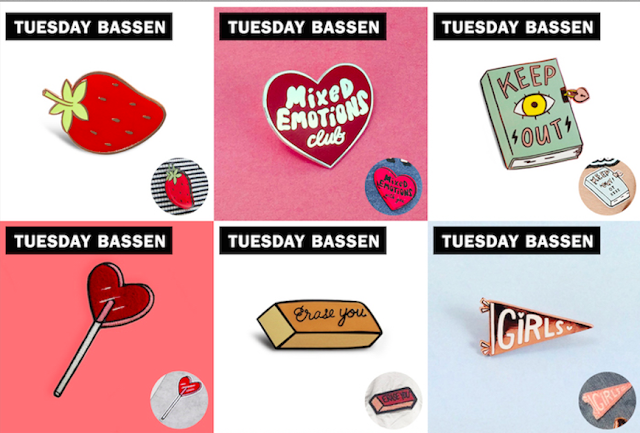 Among them is Brooklyn-based illustrator Adam Kurtz, a friend of Bassen’s, who was alerted by a fan via Twitter earlier this year that replicas of his designs were being sold at Bershka, a Zara subsidiary. “My own artwork in question is so simplistic that I could barely understand why they even needed to trace it exactly,” Kurtz told Hyperallergic.

It was an enamel pin featuring an illustration of a shopping bag with the words “Thank You.” “Had they just drawn a bag, my specific case would have less merit.”

After Kurtz emailed Zara’s customer service about what he saw as art theft, the product was removed from Bershka’s site. It wasn’t until Bassen’s complaint drew widespread attention that he decided to take action against the retailer.


Shop Art Theft, a website launched by Kurtz, offers side-by-side comparisons of independent artist’s designs and Zara’s alleged ripoffs, with links to buy the originals. A call to boycott Zara, led by Kurtz, has also begun to take off.

“Shop Art Theft was my way of trying to turn a negative situation on its head a little bit,” Kurtz says. “Obviously, I wanted to create a resource where people could draw their own conclusions, and at first there were only 12 artworks in question.

Creating a central resource ended up helping other artists either feel confident saying anything—nobody really wants to be seen whining to their existing followers—or just a call to action to check ZARA sites for more cases.”

After he launched the site, more artists contacted Kurtz saying Zara had ripped off their designs. The number of allegedly plagiarized designs has almost quadrupled.

“We were all surprised to find that our creative work was suddenly all over Zara product,” Kurtz wrote in a statement on the website. “Our original art has been reproduced as pin and patch sets, embroidered decals and prints on apparel.

Though some of the themes maybe be simple shapes or icons, Zara’s replications are near-identical, and the massive scale of this theft from a tight-knit creative scene implies a conscious choice by Zara, Bershka, Pull&Bear, Stradivarius and the parent company Inditex to not bother making significant modifications.”

After being alerted by fans via email and social media of Zara’s apparent ripoffs, Bassen hired a lawyer to challenge the intellectual property theft, and sent a cease-and-desist letter to the retailer. The company’s legal response has also attracted widespread attention:

The lack of distinctiveness of your client’s purported designs makes it very hard to see how a significant part of the population anywhere in the world would associate the signs with Tuesday Bassen. This is our firm view, and being fully aware of the 3rd party notifications that you have brought to our attention. In this last regard, please not [sic] that such notifications amount to a handful of complaints only; when it is borne in mind that millions of users worldwide visit the respective websites monthly (Zara: 98,000,000 average monthly visits last year, Bershka: 15,000,000 average monthly visits last year), the figures clearly put those few notifications into sharp perspective.

While Kurtz’s sales have increased a bit since the launch of ShopArtTheft, he’s more comforted by the comments, notes, and emails coming from fans and other artists who empathize. “When this happens you just kind of feel like shit, and it makes you question why you’re sharing your work and making it so easy to steal,” Kurtz says.

“The immediate support was immediately grounding, like ‘no, don’t be ridiculous, this is on Zara, not you.’ Other working creatives and small business owners who have experienced similar situations have reached out to thank us for working so hard to draw attention to this.”

The artists involved are taking steps toward legal action against Zara. “I’m personally hoping [our case] becomes a landmark example of really small-scale independent artists banding together to stand up to a major retailer,” Kurtz says.

“It’s definitely a blight on Zara’s history as a company that will be mentioned in any similar cases, just as Kanye and Louboutin have been referenced in relation to ours.”

Since the launch of Shop Art Theft, Zara has apparently changed its stance toward the accusations. In a statement to The Cut, Inditex, Zara’s parent company and the world’s largest apparel retailer, wrote:


Inditex has the utmost respect for the individual creativity of all artists and designers and takes all claims concerning third party intellectual property rights very seriously. Inditex was recently contacted by the lawyers of artist Tuesday Bassen who noted the use of illustrations in some badges sourced externally and on clothes in its Group stores. The company immediately opened an investigation into the matter and suspended the relevant items from sale. Inditex’s legal team is also in contact with Tuesday Bassen’s lawyers to clarify and resolve the situation as swiftly as possible. We are also currently investigating other allegations of illustrations used on badges provided by external suppliers on a case by case basis.

The number of artists alleging plagiarism is high, but some find strength in those numbers. “There is a sort of sick comfort in being ripped off along with so many friends and peers,” Kurtz says, “because now we all get to navigate this shit together.”