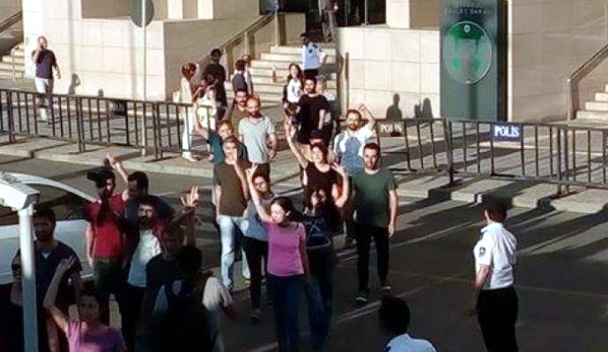 In an interview following his release, Güzel told journalist Manuel Martorell of cuartopoder that anti-terrorist police arrived Tuesday intent on confiscating the newspaper’s computers and became violent when they realized they were being filmed.

The journalists were then beaten and shoved down stairs. The beating, Güzel said, continued when he was in a police vehicle. “They insulted us shouting: ‘Armenians, Jews, sons of Lenin; you are going to find out about the strength of the Turkish state,'” Güzel recounted.

The Özgür Gündem journalists, though released, face charges of “resistance, insult and assault to authority.”

Upon release a spokesperson for the journalists said: “We will continue our work... We will fight for a free press.”

To see the slideshow of Cartoonists in Solidarity with Dogan Güzel, click here.
Published by Bado at 6:55 AM