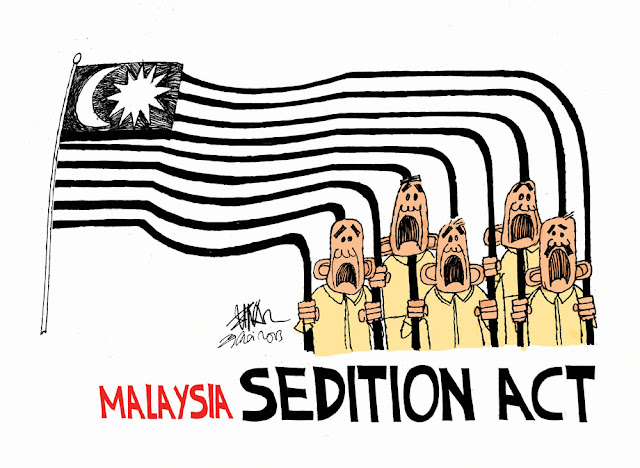 On 17 October 2016, freelance political cartoonist, Zulkiflee Anwar Ulhaque, commonly known as Zunar, was stopped by immigration authorities at the Kuala Lumpur International Airport as he attempted to travel to Singapore.

He was told by the immigration officers that they had received a direct order from the Inspector General of Police (IGP), Tan Sri Khalid Abu Bakar, to prevent him from leaving the country, effective from 24 une 2016.

Zunar is well known for his provocative cartoons that frequently lampoon Malaysian politics. He was charged with nine acts of sedition in 2015 relating to comments and a cartoon he tweeted alleging judicial bias and government intervention in the Malaysian opposition leader Datuk Seri Anwar Ibrahim's sodomy trial and conviction.

However, he has not yet been convicted and his case is due to begin on 22 November. Zunar will face up to 43 years in jail in Malaysia if he is found guilty. He has previously been jailed on two occasions for his controversial drawings; once for two days in 2010, and again for three days in 2015. Five of his cartoon publications are forbidden in the country, and he claims to have been raided in his office in Kuala Lumpur on several occasions.

Zunar said in a statement, "I will file a legal challenge to remove the ban. Talent is not a gift, talent is a responsibility. They can ban my books, they can ban my cartoon, they can ban me from traveling, but they cannot ban my mind, I will keep drawing until the last drop of my ink."

Strongly condemning the ban, the NJUM said they "find that the move by the IGP to ban a fellow citizen from traveling goes beyond the norm of the Constitution. By law, he has no jurisdiction. The ban of a journalist, a political cartoonist, is a move against freedom of speech and rights. It is another sad day for Malaysia."

In agreeance, the IFJ said: "At present, Malaysian media workers face a troubling environment for press freedom. Earlier this week there was a case of violence against journalists covering protests in Kuala Selangor. And now, the travel ban of Zunar, who is facing sedition charges for expressing a view at odds with the government, demonstrates the unabashed attempt on behalf of the Malaysian government to silence critics and dissenting voices in the media. We demand that the government take immediate action to revoke Zunar's travel restrictions."