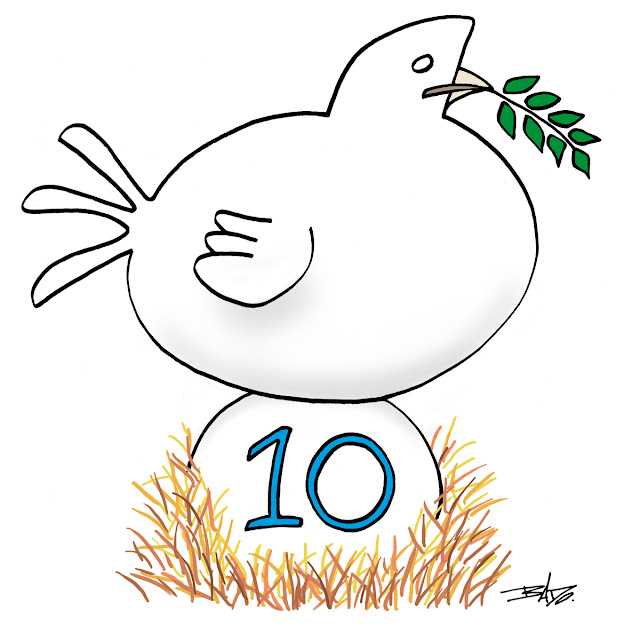 The Society of Illustrators is hosting from October 25 to December 30 an exhibition to celebrate the 10th anniversary of Cartooning for Peace.

Cartooning for Peace is a network of editorial cartoonists who work, through humor, to ensure respect for freedoms around the world.

Initiated in 2006 as a follow up to a United Nations seminar “Unlearning intolerance” at the UN headquarters, Plantu, cartoonist for the French newspaper Le Monde created an association located in Paris, France.

Ten years from its creation, Cartooning for Peace has grown to a worldwide membership of 147 cartoonists from 55 countries. Members are selected in an application process. The work of members are exhibited all over the world, and often member cartoonists travel to speak and discuss global as well as local issues with resident cartoonists and the public.

In 2010, a Swiss foundation was also created in Geneva by cartoonists Patrick Chappatte and Jean Plantu, and former UN spokesperson Marie Heuzé.

Overseen by Honorary Chairman Kofi Annan, former UN Secretary General and Nobel Peace laureate, the Cartooning for Peace Foundation bestows a bi-annual prize to cartoonists whose work is of high quality and who are in some way in danger or at risk because of the cartoons they create.

The Swiss foundation has also established a solidarity fund, giving financial assistance and support to cartoonists in difficulty or under threat.


Because of its ability to transcend languages and cultures, editorial cartoons are a powerful tool. They can bring about cross-cultural dialogue and fuel debate about fundamental values such as freedom of thought, freedom of expression, peace, as well as tolerance.

In order to promote reflection on deeply held humanistic values, the organization considers that its duty is to demonstrate the diversity of human perspectives throughout the whole range of its missions:

- To promote the editorial cartoon as a means of defending human rights and freedom of speech by way of meetings, printed materials and exhibitions;

- To use the educational value of the editorial cartoon to denounce all forms of intolerance and to raise awareness, through humor, among young people and prisoners, about major social issues;

- To provide support and visibility to those editorial cartoonists who are prevented from doing their jobs and even threatened.

On display in the second floor gallery.
Published by Bado at 12:00 AM