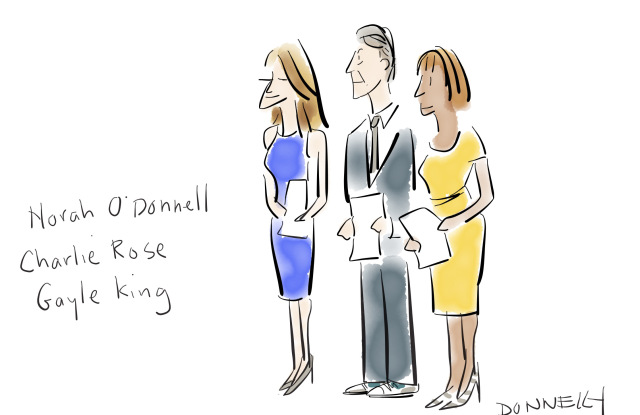 It may seem counter-intuitive at first blush — a TV network with multimedia storytelling tools at its fingertips turning to one of print’s oldest occupations for growth — but according to the show’s executive producer Ryan Kadro, the hire is a way to “differentiate” the show’s coverage on TV and via social media.

“It brings a visual component to stories that doesn’t exist in our space,” Kadro said. “We look at the social platforms as an extension of our brand. When we put Liza on television it’s to make people aware that we have this happening on our other platforms, to go and check out our Instagram and social feeds.”

Donnelly — who also will continue to contribute to The New Yorker — was first introduced to the gang at “CBS This Morning” during the Democratic National Convention in Philadelphia this summer.

The cartoonist, who was on assignment for The New Yorker, appeared on the show to publicize her illustrations of the convention. While in the greenroom, she made a quick sketch of guest Carole King, who would perform on the last night of the convention. Her ability to quickly depict a scene by sketching on an iPad drew the attention of the three hosts and crew.

What followed were a few collaborations with CBS, including a series of sketches of the anchors and crew at work during the DNC, and other behind-the-scenes moments.

“We’ve had a number of requests from people to draw them,” Kadro said, noting that the team is thinking of bringing in a printer so guests can have their own hard-copy sketches.

“She’s incredibly popular when she’s here,” offered Kevin Prince, the show’s social media producer, who said now that Donnelly is on board, they will have her document other “big events,” such as the Grammys or the Halloween Parade in New York. It’s a way for CBS to differentiate its coverage, the producers noted.
Published by Bado at 3:55 AM