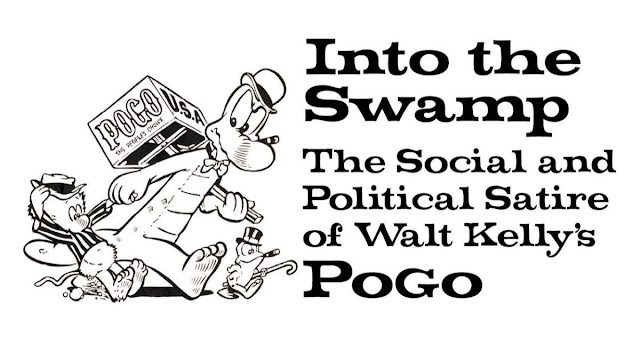 Into the Swamp: The Social and Political Satire of Walt Kelly’s Pogo, an exhibition curated from the Billy Ireland Cartoon Library & Museum (BICLM) collections, showcases political satire and commentary using a motley group of swamp critters from Walt Kelly’s newspaper comic strip Pogo.
Into the Swamp is on view January 30 through October 31, 2021 with a temporary closing April 19 through June 11, 2021 at the Billy Ireland Cartoon Library & Museum. Admission is free.
Walt Kelly tackled many of the political issues of the world in which he lived, from the Red Scare to civil rights, the environment, scientific exploration and consumerism.
We celebrate Walt Kelly and his social commentary through the joyous, poignant and occasionally profound insights and beauty of the alternative universe that is Pogo.
Working in the mid-twentieth century, Kelly drew on the legacy of earlier generations of newspaper cartoonists and then became a major influence on his successors.

This exhibition primarily features art and archival materials from the Walt Kelly Collection, which was donated to the BICLM by Selby Kelly.
It also showcases artwork from the collection of Doonesbury cartoonist Garry B. Trudeau, which he generously donated to the BICLM in 2020.
Co-curated by Lucy Shelton Caswell, Professor Emerita and Founding Curator of the Billy Ireland Cartoon Library & Museum, and Jenny E. Robb, Curator & Associate Professor.
Into the Swamp: The Social and Political Satire of Walt Kelly’s Pogo
January 30 - October 31, 2021
1:00 pm - 4:00 pm