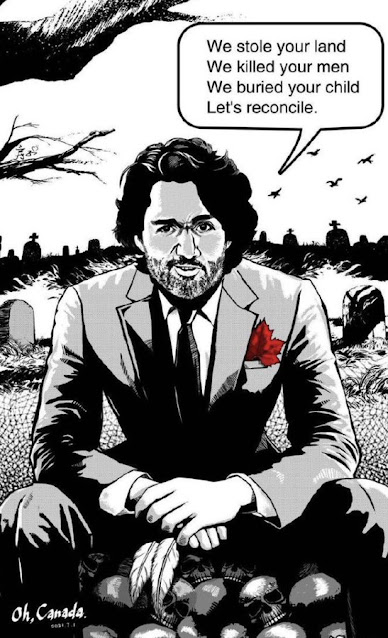 The cartoon is not exactly subtle. It depicts Prime Minister Justin Trudeau sitting on what appear to be the skulls of Indigenous people, grave stones in the background.

“We stole your land, we killed your men, we buried your child (sic),” says the smirking Trudeau character as vultures circle behind him. “Let’s reconcile.”
But it was retweeted recently by both a Chinese diplomat and Hu Xijin, editor in chief of Global Times, a Chinese Communist Party newspaper with an active online presence.

“Who is this man?” Hu added to her 440,000 followers. “Isn’t he worried about the indigenous people spitting on his face?”

In his retweet of the illustration, Li Yang, Beijing’s consul general in Rio de Janeiro, scoffed: “Do you think your so-called reconciliation is worth showing off?!!!”
The reposted cartoon is arguably the bluntest example yet of a campaign by Beijing to turn the tables on Canada and question how this country can lecture China about human rights when it has failed its own Indigenous people.

“This tweet stood out to me because it is so much more provocative,” said Adrian Zenz, an anthropologist who has led research into China’s mistreatment of its Uyghur minority, and who tweeted about the cartoon.

“It’s ramping up things much more than what had come through official channels.”

He likens the cartoon to a doctored photo posted by a Chinese Foreign Ministry official last November that appeared to show an Australian soldier slitting the throat of an Afghan child, sparking outrage in Australia.

Chinese state media began the anti-Canada offensive soon after the discovery of hundreds of unmarked graves at a residential school in Kamloops, B.C., this spring and have kept up the pressure with regular English-language editorials and columns.

Diplomats and other government officials later joined the effort, urging the United Nations to investigate Canada’s treatment of Indigenous people.

Such critiques undoubtedly resonate with some Indigenous people and other Canadians angry that Ottawa has not done more to address problems related to residential schools and other issues.

A spokesman for the Assembly of First Nations could not be reached for comment Wednesday.

But to China critics, the effort smacks of “whataboutism” — the practice of authoritarian regimes and others to respond to criticism by levelling accusations at their detractors.

“Convincing people of moral equivalence between China and Canada is a huge win for Beijing given our respective reputations,” said David Mulroney, a former Canadian ambassador to Beijing.
“It also helps China if foreign observers see Xinjiang through the prism of Canada’s residential schools program.”

Yet, said the Munk School of Global Affairs fellow, it refuses to own up to “a vast, ambitious and multifaceted 21st century genocide.”

Li, the diplomat based in Brazil, is the same one who called Trudeau “boy” and a “running dog” of the U.S. in a tweet in March.
Although the party-run Global Times is not an actual department of the government, it tends to reflect or foretell Chinese strategy, often going a bit further than actual government officials would dare, said Zenz.

As one of the most prominent Western researchers into the plight of the Uyghurs, the fellow at Washington, D.C.’s Victims of Communism Memorial Foundation is a frequent target of the newspaper himself.

Zenz said the cartoon might be a legitimate form of satire if Canada had denied the harsh abuses perpetrated by residential schools and done nothing about them.

But even if the measures taken by the federal government are not enough, the cartoon is a “complete misrepresentation” of how Ottawa has responded, he said.

Asked about the illustration, a spokeswoman for Trudeau pointed to comments he made after China’s call for a UN investigation of Canada.
He said then that Beijing has failed even to admit its present-day human-rights problems, let alone take measures to alleviate them, a “fundamental difference” compared to Canada.

The cartoon appears to be the work of a Twitter account located in China, where most people are banned from using the site.
Though the account holder describes herself as an ordinary citizen in a response to Zenz’s Tweet, her bio says that Zhao Lijian, the sharp-tongued and controversial Chinese ambassador to Australia, “is really fond of me!”

Another illustration she posted is titled “Kill and Reconcile,” showing Trudeau giving a speech in front of a backdrop that says “Indigenous people must reconcile” with a gravesite hidden in the background. 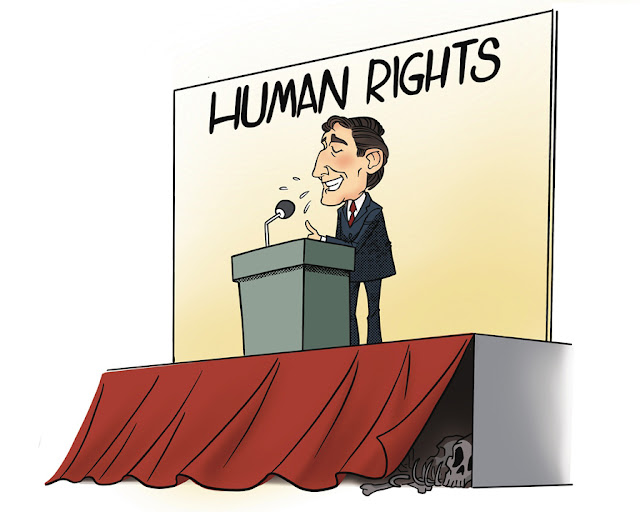