Aislin and Bors on the State of Editorial Cartoons 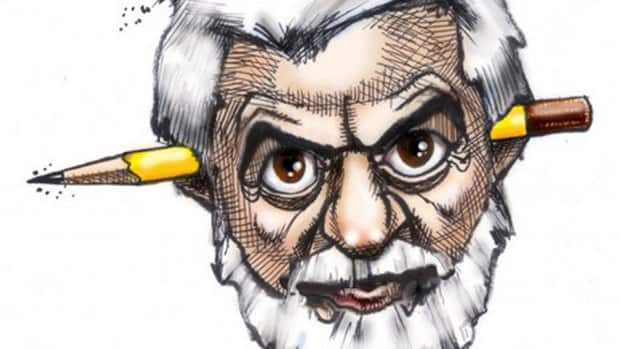 The State of Editorial Cartoons18:51

Canadian cartoonist Terry Mosher — a.k.a. Aislin of the Montreal Gazette — says Canadian cartooning is still thriving, in part because editorial pages are still alive in most major cities and each local cartoonist has his or her own following.

In an interview with Jian Ghomeshi, Mosher says he believes American cartooning has fallen victim to syndication, which results in very bland cartoons.

“Editorial cartooning is disappearing in the U.S. I think that’s primarily because of the corporate brittleness that exists in the U.S. Nobody wants to take a chance They want Hi and Lois kind of stuff,” he said.

But cartooning fulfills an important role in our conversation about the news, he maintains, because it reflects the public point of view and zeros in on what’s happening in the moment.

“I think we’re primarily commentators, but from a satirical point of view. I don’t think we’re activists, though we can occasionally be, if we feel strongly about it,” he said.

Mosher predicts a downturn in cartooning over the next 10 years, even in Canada, but says new forums may be found on the internet.

Matt Bors, a Pulitzer-Prize-winning cartoonist from Portland, Ore., and editor for The Cartoon Movement, an online platform for international cartoons, agrees editorial cartooning is dying out in the U.S.

It’s a victim of the demise of newspapers, he told Q, because it’s expensive to keep an editorial cartoonist on staff.

The only way they may survive is on the internet, but the problem is finding a way to pay cartoonists for their work, he said.

“Editorial cartoons are still incredibly popular. We’re in the age of blogs and twitter and everyone is sharing things all the time. Cartoons are made to thrive in this environment,” he said.

Internet cartooning may be even be freer from control by corporate interests, he added, as most cartoonists can post their work directly, without any filter.

Mosher has gathered the best of Canadian cartoons in his latest book Caricature Cartoon Canada.
Published by Bado at 4:00 AM