A Chinese cartoonist skewers the Communist rulers from afar 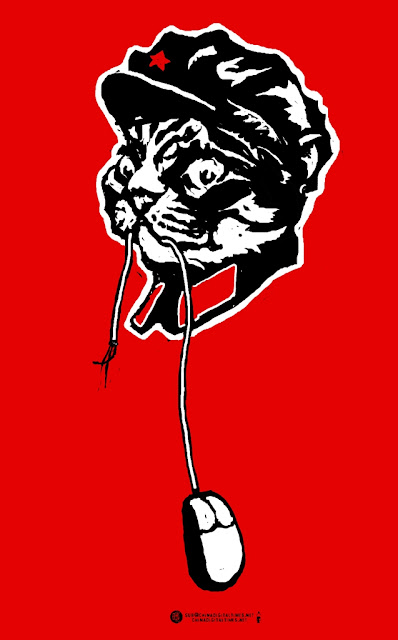 A Chinese man decided to disappear on his own. He's a cartoonist who goes by the pen name: Badiucao.

I follow global political cartoons here at The World, so I've known about Badiucao since he went into exile in Australia a while back.

I always wanted to know was the meaning behind his name. "Actually, it doesn't mean anything at all," he says. "I just picked it by the sound. Any meaning behind it can refer to my real identity. So I just chose a random name for myself.

The pen name is for safety. China's communist government do not find his work funny.
Badiucao draws for self-expression. "I'm probably not a good writer, but I can draw," he says. "And with my drawing I can give the world my voice. Also, I think cartoons are a good way to go against the dictatorship."

Many in China saw his work on social media site Weibo. But viewers don't have much time to look. Chinese officials shut down his account quickly and regularly. "I've reopened my account more than 30 times," he says.

Despite the roadblocks and being forced to live in exile, Badiucao hopes his cartoons can challenge the authority of the Chinese Communist Party. "I want to use my cartoons to deliver a message: As individuals, we can still have our voice."


China Digital Times has just published a collection of Badiucao's cartoons in an e-book called Watching Big Brother: Political Cartoons by Badiucao.
Published by Bado at 7:15 AM