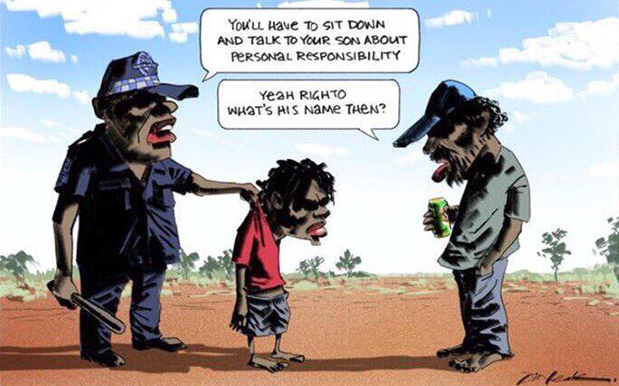 Emboldened in part by the rise of right-wing populists like Donald Trump, Australia’s conservatives are using an official investigation into a cartoon to pursue a long-cherished goal: dismantling a law protecting minorities from abuse.

Conservatives have expressed outrage at — and skillfully exploited — a decision by Australia’s Human Rights Commission to investigate a cartoon published in a national newspaper controlled by media mogul Rupert Murdoch that was widely condemned as racist.
...

After receiving a complaint from two Aboriginal men, the commission is considering if the cartoon, published in August, breaches a ban on insulting or humiliating anyone on the basis of race or national origin. Offenders can be sued but can’t be sent to jail.
...

The cartoonist at the center of the controversy, Bill Leak, has a history of pushing boundaries in The Australian, a nationally circulated right-wing newspaper.

After publishing a cartoon of the prophet Muhammad in the wake of the Charlie Hebdo massacre in Paris last year he was urged by security agencies to move out of his Sydney home for his own safety.

His new house in a sleepy coastal town has three emergency buttons to summon help and a reinforced panic room. He uses an alias online.

“You are talking to the Salman Rushdie of the Central Coast,” he joked in a recent phone interview. “What is going on? Why are people taking cartoons so f---ing seriously?”