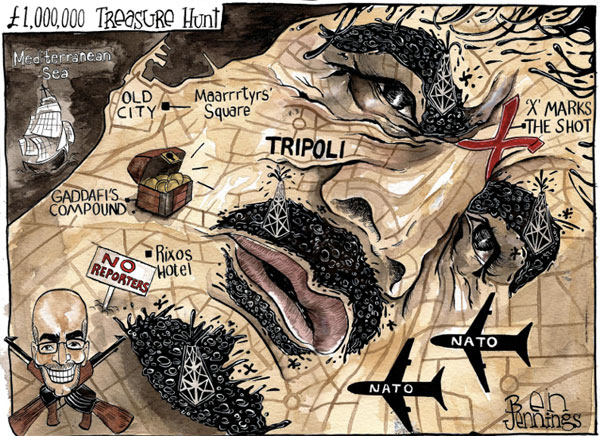 University of Westminster student Ben Jennings won the 2011 Political Cartoon of the Year beating out professional UK editorial cartoonists for the honor given by the Political Cartoon Society. Ben is an undergraduate working toward a BA Honours Illustration degree.
On his blog he reports he was “utterly gobsmacked” to receive the award.

A budding art student's illustration has trumped thousands of professional drawings to win the political cartoon of the year.
Ben Jennings, an undergraduate studying on the BA Honours Illustration degree at the University of Westminster, won the prestigious prize awarded by the Political Cartoon Society, for his Gaddafi Treasure Map cartoon.
Originally from Hemel Hempstead, Jennings decided he wanted to pursue a career as a cartoonist after selling caricatures at school to students and teachers when he was 15.
Ben’s work has appeared in the music newspaper The Stool Pigeon, The Guardian, The Morning Star and in the new year he will be providing a regular cartoon for the 'i' newspaper after winning their ‘i cartoons’ competition.
Jennings, who was presented the award by former Chancellor of the Exchequer, Alistair Darling, said: “I was astonished to win the award and being nominated alongside cartoonists I’ve followed for years such as Steve Bell and Martin Rowson was a true honour."
Sally Feldman, dean of the media, arts & design school at Jennings's university, says: “When Ben joined it was clear he had an exceptional talent and his ability to mix humour alongside serious political issues and produce one strong image really is incredible.
"We are all very proud of him and this latest achievement.”
Published by Bado at 7:11 AM