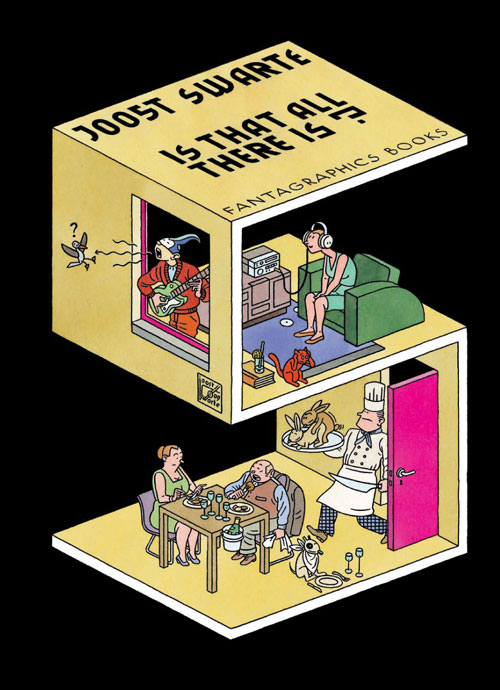 A review by Matt Seneca in The Comics Journal:
The title’s the joke: yes, folks, this rather slim, elegantly designed hardcover contains (nearly) every published comic by Dutch cartoonist Joost Swarte. The book feels both in and slightly out of sync with this particular moment in comics reprint culture, in which translations of European master cartoonists are increasingly replacing newspaper strip resurrections as the big news. Europe’s comics feel like a bottomless well at the moment, with every new or reintroduced name bearing whole libraries of untranslated genius still to be gotten around to (see Jacques Tardi and Milo Manara). But then there is Swarte, whose entire career in the art form weighs a few ounces and can be carried easily in one hand, yet whose impact on comics is clearly visible across the map.

Swarte’s aesthetic abides not only in work by the many notable European cartoonists who took up his stylistic gestures (Yves Chaland) and sense of high absurdism (Winshluss), but also in the artists who caught whiffs of his drawing’s cultured goofiness and painstaking construction, Chris Ware, Frank Quitely, and Richard McGuire chief among them. The English-speaking American audience — even those of us who’ve done the digging and have the Heavy Metal back issues! — has seen more of the generational roll-out of Swarte’s influence than his actual work, and in some ways that’s created the ideal reader for such a seemingly lightweight volume of complete works. No matter the reader’s feelings toward them, each of these pages has long since proved out as important work. We’ve seen the way Swarte changed the landscape, and even if we haven’t noticed his imprimatur, no less a voice than Ware himself is there in the introduction to point it out to us, and also mention Joost’s pleasant nature and public-spiritedness in the bargain.
The comics themselves don’t go down easy, but such is their nature. Though Swarte’s crisply blocked grids of squeaky clean cartoons are about as eminently readable as comics get this side of Nancy, the multi-layered shaggy dog plots are something else entirely. Is That All There Is? manages to encompass no less than fifty-three different stories, none longer than sixteen pages and frequently as short as a single page or less. The low page count hardly indicates a lack of ideas; rather, Swarte’s writing is committed to accomplishing the same end as cartooned drawing does, squeezing as much complex information as possible into a few small, simplified spaces. Just about every panel Swarte draws both carries on the narrative previously established while also introducing some new plot thread or visual wrinkle of its own, to be drawn out further in the next. It’s dizzying material, comics that demand time and space to unfurl themselves in the reader’s head after they conclude — woe betide the harried reader (or time-pressed reviewer…) who rushes through this book in a few sittings. As already mentioned, there are fifty-three different comics in here, and they really require fifty-three different readings to yield up all their riches.

The beginnings of Swarte’s longer stories are almost always impossible to recall by the end, and it’s only on a second or third read-through that the subtle patterns and repeating motifs planted in the panels begin to reveal themselves. The best of the longer pieces approach epic status in a few pages: “Enslaved By The Needle” sketches out a queasy, breakneck story of social malaise and transatlantic drug conspiracies, “One Chance In One Hundred Thousand” crams a Hitchcock film’s worth of twists and reversals into that reliable comic-book warhorse, the eight-page crime story, and “Imago Moderna” gives a hilariously grotesque portrait of what life would be like for an average citizen of the disrepaired metropolises looming in the backgrounds of R. Crumb and Chester Gould drawings. The short pieces isolate single facets of the type featured in the longer ones — jokes or visual gags, an irritating happenstance or a bizarre turn of events — and play them out into towering constructions, much the same way the best pop songs amplify a single phrase or snatch of melody into something grand beyond its surface.
Though they may also achieve the status of art, these are pop comics first and foremost, as deserving of that adjective as anything featuring superheroes. None of Swarte’s stories, the long or the short, attempt the highbrow drag of the American “graphic novels” that have followed in their wake; they are far too aware of themselves as comics for that, and even when taking on potentially weighty topics they stick to the form’s wheelhouse of raunchy humor, blood and guts, and the aggravations of lower-middle class life. The prevalent attitude seems to be that bestowing the ability to confront life’s darkest possibilities is the true purpose of comedy — an incredibly refreshing attitude given that most other comics this proficient carry a relentless sense of doom and gloom about them. The frequently terrifying details of urban decay and the disturbing nonsensical aspects of Swarte’s comics are played strictly for laughs, and even in the unsettling moments before the punchlines hit, the bouncy exaggeration of every drawing shines stubbornly on the lighter side of whatever terror it depicts.

Those drawings will almost certainly continue on as the main aspect of Swarte’s legacy, and deservedly so. Despite the addictively peculiar lilt of the stories, Swarte’s epic hijacking of Hergé’s style, perhaps the most recognizable and popular in the whole world, is in many ways the real meat of his contribution to sequential art. It’s the perfect match for his particular brand of storytelling, and even without reading the words or following the bobs and weaves of the plot specifics, there’s plenty to be gotten out of seeing Swarte’s note-perfect Tintin rip turned to making pictures of zombified dope fiends stabbing their pusher for the next fix, or a child’s broganed foot delivering a sharp kick to a pantsless man’s exposed anus as stars of pain pop from the point of impact, or a three-testicled racial caricature thrusting into the archetypal “sexy French chorus girl.” The illicit thrill of seeing such a familiar, telegraphing style expanded into the realms of the lurid and the bizarre is enough to knock a reader flat at first sight, and probably fourth and fifth for that matter.
But after a while one begins to notice how effortlessly Swarte filigrees Hergé’s mannerisms with his own. Deco flourishes brighten up the city-scapes, plenty of Dutch de stijl dots the interior shots, and Swarte’s instinct for complexity comes through in his design sense at least as much as it does in his storytelling. No simple four-legged side table will suffice if a multi-tiered mini-skyscraper can take its place, no simple clock radio where a deluxe, bas-reliefed jukebox can be drawn. In returning to Swarte’s stories for greater comprehension, readers will inevitably find themselves drawn into the absolute wealth of truly innovative detail that every panel is lush with.
If the appropriation of Hergé was a shot heard ‘round the world — and it was, eventually (and indirectly) providing even such modern cartoonists as Benjamin Marra, Ryan Cecil Smith, and Tom Scioli with a model for their own appropriations of their favorite cartoonists’ styles — Swarte’s ability to expand his work beyond imitation and into innovation, uncovering undiscovered potentials for the Hergé aesthetic as he went, is that shot’s echo, the way for us to be sure of who fired it. The later work collected here, in which the drawing is stripped down to something resembling the minimalism of Otto Soglow as much as it does Hergé, confirms Swarte as a stylistic master in his own right, his evocation of another cartoonist a mere stepping stone to the creation of a wholly unique mode of expression.

Perhaps confusion is the probable reaction upon finding the complete works of a great cartoonist taking up such a small package, but the likely thought after finishing Is That All There Is? is absentmindedly wondering why there haven’t been more like Swarte, cartoonists who said their bit in no more than a few pages at a time. And of course, there have been. But none of them have yet been remembered well enough or considered important enough to merit this kind of lavish archival treatment, and that’s because the ones who drop out after a few pages usually just haven’t said very much, or uncovered much worth seeing. The ones who do those things need thousands of pages, years or decades of concerted effort, before they hit on their genius. Swarte stands alone as the one who pulled off an entire fantastic career in something the length of a film screenplay or a longer novella. This book is a document of a true original’s contribution to comics, one that well outweighs its fifteen ounces and outstrips its 144 pages. Yes, that’s all there is, and it’s all you could possibly need.
*   *   *   *   *
///NOTE///  Because of the outcry raised against the small page size: Swarte’s advice—that because the book is printed 15% smaller than in some of the contents’ original presentation, readers should hold it 15% closer to their faces—proves highly effective. If you’re looking for The Comics Journal’s recommendation for how to easily overcome what some have termed a dire problem with the book, well, there it is!


Here are a few magazine covers by Joost Swarte: 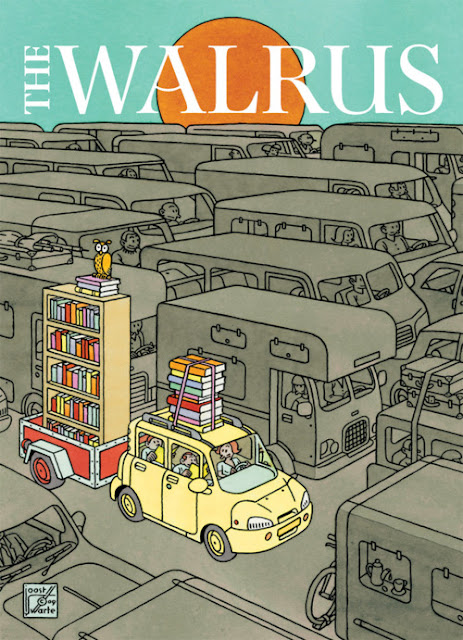 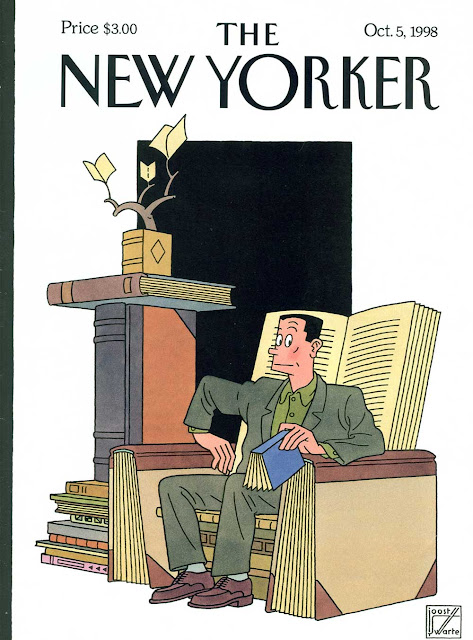