Dapper and compact, soft-spoken and full of erudite conversation, R.O. Blechman is the single most cosmopolitan cartoonist I’ve ever met. He could easily be a character in a Henry James novel.
Appropriately enough, his art owes a debt to that mid-century mansion of metropolitan wit, Harold Ross’ New Yorker, where James Thurber and William Steig returned cartoons to their roots in doodling.
Blechman’s scraggly-lined people, so minimal that they are barely visible, show what happens when the tradition of Thurber and Steig is taken to its extreme. All excess is removed and every drop of ink counts.
Born in Brooklyn in 1930, Oscar Robert (“Bob”) Blechman made his mark as a cartoonist at a young age, with his now classic work The Juggler of Our Lady coming out in 1953, not long after he had graduated from Oberlin College.
One of several proto-graphic novels from the late 1940s and early 1950s, The Juggler of Our Lady earned praise for its heartfelt story and touchingly spare art. It was made into an animated short in 1958.
Blechman has gone on to distinguish himself as a magazine cartoonist (appearing in everything from Harvey Kurtzman’s Humbug to Esquire), animator (he directed the 1984 PBS special The Soldier’s Tale, which won an Emmy), advertising mastermind (his many ads, including the 1967 Alka-Seltzer commercial, are a fixture of post-war visual culture).
In recent years, he’s authored a kid’s book (Franklin the Fly) and a very astute book of advice for freelance creators (Dear James: Letters to a Young Illustrator).
In 2009, Drawn and Quarterly published Talking Lines: The Graphic Stories of R.O. Blechman, a sturdy and sumptuous collection that usefully gathers together fugitive pieces done over several decades.

When did you first become aware of The New Yorker?
Oh, God. Early on, my Dear James talks a lot about that. When it was first starting out, I would submit cartoons to them. They rejected everything, and then finally they accepted something with a hand-written letter. So I didn’t do any work for a long time … No more submissions because I was afraid I would be dropped a notch to the printed rejection slips.
What were the voices you practiced before finding your style?
Well, I’ll just answer this question elliptically. My very first job was for a defunct magazine called Park East. There’s no contemporary equivalent. But I was told, “give me a page of drawing and I’ll give you a hundred bucks.” And I thought, God, the guy is actually going to pay me one hundred dollars for my drawings?
So my first ones, which maybe was my first published work, that was in 1952 or 1953, was done in a stitched line technique. Which was very popular at the time, it was kind of innovated by Ben Shahn and taken over by David Stone Martin — I think was the guy’s name.
And even, believe it or not, Andy Warhol when he was first starting, he did the stitched line technique. But my work was done in that style. But part of it, I now remember, was that I was given another job. I think it was for the Jewish Theological Seminary and my stuff was very tight because I didn’t think that a loose technique was appropriate.
And then, how did I come to my style? I think it’s a mystery, I don’t know if any artist can ever say how. But it was a gradual, very slow, laborious process in which a lot of it is natural, it comes out of you.
But a lot of it is arbitrary and artificial, because you say, hey I feel comfortable with this, I like it, I’m going to explore this.
I did a lot of my drawings in pencil because I thought that the pencil line was nice. I would soon realize that the pencil line was not so nice and so I started doing work in ink. I don’t know, I just don’t know how I came across my style. It’s not that I copied Thurber or copied Steinberg even though there may have been Steinbergian elements in my stuff. 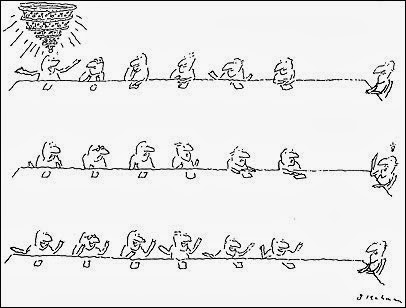 By the way, that school you went to, I don’t know if you know this, I believe that was Harvey Kurtzman’s school as well.
Yes it was. I wish I had known Harvey well. I kind of regret it. But at the time, I didn’t appreciate his stuff because I didn’t like MAD magazine and I didn’t like comic books. I thought it was a cultural level below me.
It’s a terrible thing to say, but I liked Harvey a lot. And I didn’t know his work. There’s this wonderful book that Abrams came out with. 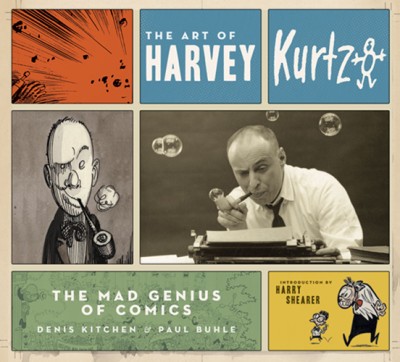 My first insight into what Harvey was all about was when I attended his memorial service and Art Spiegelman gave the, I wouldn’t call it a eulogy, but the … well, he talked about Harvey and I realized, “Oh my God, this guy was a very important artist,” and I didn’t know it at the time.
Kurtzman is a bit of a tragic figure in the sense that he was often working in venues that were beneath him. He had this creativity that didn’t have an outlet.
So MAD comics was very good, but a 10¢ comic book full of garish colors, and then later he tried to find a creative outlet — that was The Jungle Book — which never took off. And then he worked for Playboy, which is … you know. 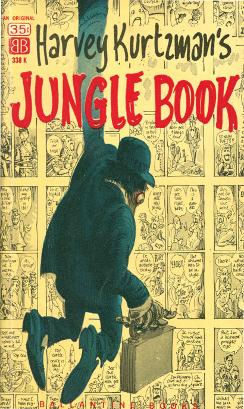 Humbug is a swell magazine. I really like it. You probably know the two volume series. 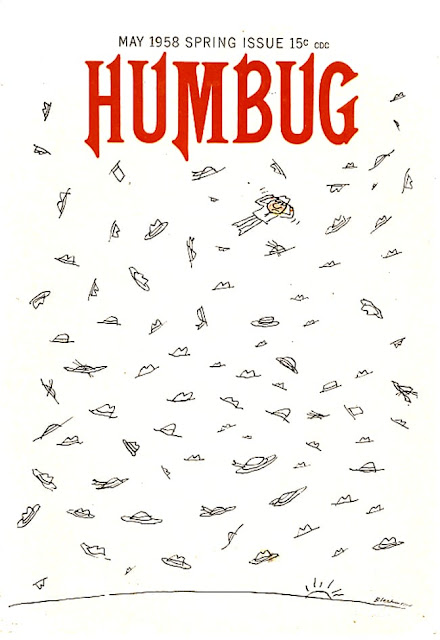 Yeah.
What a work of art that is
A peak at his studio.
Published by Bado at 4:00 AM